When MLB decreed that fans could return en masse for the 2021 season, it stood to reason that the Astros would face the wrath of the other 29 fanbases, especially those in New York and Los Angeles. Deprived of a full season of booing and taunting, they had to content themselves with silly Twitter accounts and on-line trolling of social media. However, with fans back, it was time for the Astros to face the reckoning. Thus, for every single road game, when the Astros were/are introduced, or the key players like Altuve or Correa came/come to bat, the boo-birds engaged/engage in their mating calls, usually accompanied by various combinations of words that used to be banned by the Supreme Court.

The back story of the trash cans is well known, so there is little reason to recap the history, but it got this author thinking, why an inflatable trash can and is such a move worth it? Of all the ways to show displeasure towards the Astros, placing an on-line order to receive a specially made inflatable rubber trash can, getting to the ball park, clearing security, buying refreshments, inflating said trash can and, when the moment is right, heaving said trash can from your seats on to the field of play…is this trip really necessary?

First off, from the photos that made their way around social media and various sports/fan sites, the inflatable trash cans looked like: 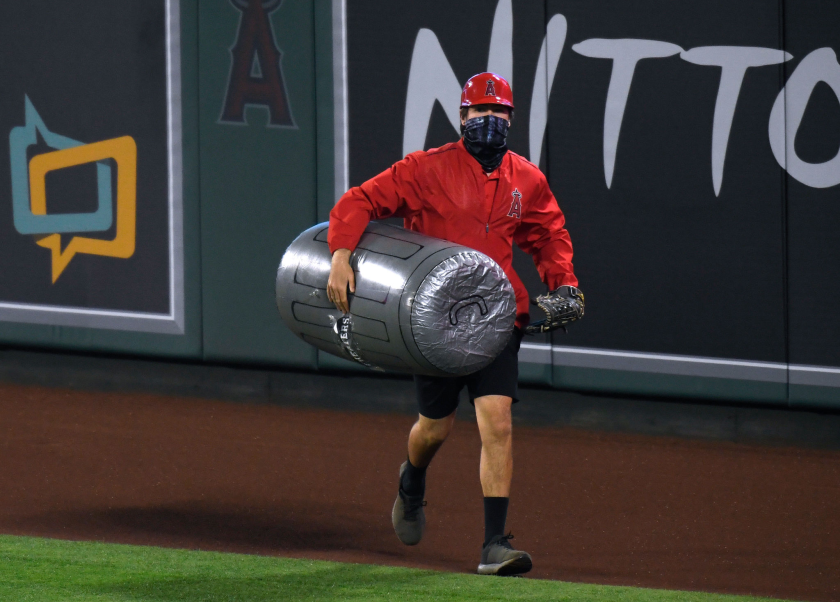 The latest accessory in MLB Parks?

Finding an exactly duplicate of this type of trash receptacle is not as easy as you would think. The best bet for this sort of trash can is the "Thrash Can" which can be found at the following online site: https://g-minds.net/Thrash_Can.htm. The intend behind said product is to simulate some of those classic battles, where guys like Terry Funk, Mick Foley, et. al. got their brains bashed in with metal (incredibly flimsy metal, but metal) trash cans. To recreate this in your backyard, sans the high potential for concussions and long-term CTE, you can just use the inflatable variant. All of the fun, half of the pain.

So, we can take a look at said website, and we come to find that this product can be order for the low, low, low price of: $14.49. A bargain, I guess. Granted, you have to throw in the basic shipping and handling charges, making it a $20.99 investment.

[NOTE: I am neither endorsing or condemning said product. I am merely pointing out what is out on the market. Granted, if said company wishes to pay me for mentioning this product, I will not say no to any additional money, but that is another matter].

Then, in order to deliver the goods, you need to actually get into the game. Presuming that you did not win the tickets in a giveaway, you need to purchase them. We will say that you don’t do this alone, so you spring for two tickets for a ball game with the team of your choice vs. the Astros. If it is a team like the Yankees or the Anaheim Angels of Los Angeles in the State of California near the Pacific Ocean, then it is possible that if you wanted prime seats for launching said trash can, then you will need to pay a pretty penny. The cheapest tickets for LAA and NYY go for $12, but that would be the worst seats. If you wanted better seats to start, get ready to pay a lot more money.

At this point, your tally would be with the cheapest option: ~$45.

Once you are in the stadium, it is highly, highly unlikely that you will just attend the game and not eat or drink anything. Welp, that is going to be that much more money, especially with LAA or NYY prices. If you wanted just the classic hot dog and beer, the low end at LAA is $10. For NYY, a beer and a "dog" would run you a minimum $9 combined. For two people at these bargain-basement prices, you can add another $18-$20. This brings the combined starting costs up to ~$65.

Then we move into the logistics of inflating said trash can to try to get that device on to the field to voice your displeasure with the Astros. The simplest solution would be to just use all of the hot air your body generates to blow up the trash can. Yet, unless you can pump out air with incredible speed, this will not be a speedy process. Plus, you greatly reduce the amount of oxygen/carbon-dioxide available to espouse all those great words in your vocabulary. It is notable that the trash cans don’t tend to appear on the field until at least the 6th inning. At pre-screening, explaining the purpose of an electric pump (assuming you can find an outlet) or a manual pump might be an exercise in creativity, but at the cost of losing said device (out another $8-$12 at least).

Most stadiums don’t tend to have specific policies for inflatable trash cans, as that is not quite a traditional part of the American game. Generally, the enforcement for such items falls under the restriction of projectiles, which could be used as weapons. Accounts of those caught with such devices have been warned to either deflate the items, or they will be confiscated/said persons kicked out of the stadium. This didn’t stop people from trying. For the Yankees, some female fans were able to sneak the material in by appearing pregnant, which is one technique. For those dudes who don’t have a female companion, it could look like you probably haven’t done a sit-up in at least 25 years (the case for many a Yankee or Angels fan). 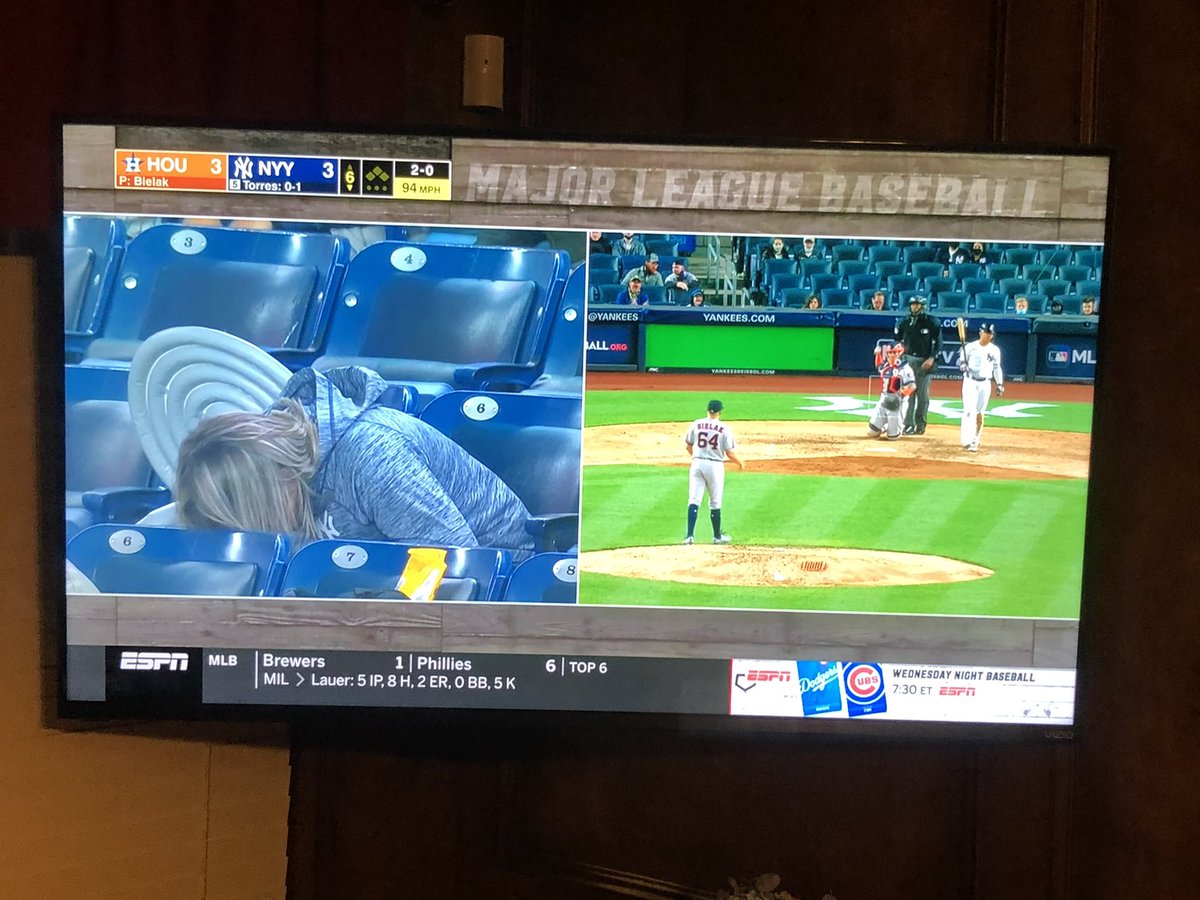 At this point, if you and your compatriot remain in the park and still possess said inflatable trash can, you would need to time the release of the object. When to deploy? Would not recommend during your team’s at bat, which some Angels fans did, as that is counter-productive to your squad exacting the desired revenge. Also, once released, two outcomes await. 1) You lose your ~$21 investment in the inflatable trash can, as stadium security is not likely to return the item once thrown on the field. 2) You face ejection from the game, probably far earlier than desired, with the prospect of future suspension from the stadium for future events.

Now that we have taken this journey into the logic and cost behind brining an inflatable trash can to a game, is it really worth it? The first game the trash can appeared, the home team won 7-6, but it was probably more a result of the Astros’ less than stellar bullpen in action. The Yankees took the 1st 2 games of the 3-game set at Yankees Stadium where some inflatable trash cans appeared in the stands. However, the losses were as much about that same bullpen as any inflatable items. Yet, at the time of this writing, the Astros maintain a winning road record (29-20) and one of the best records in all of MLB (63-40).

In conclusion, the value cost of bringing an inflatable trash can to a game, which will run you at least $65 to $77 (throwing in the electric air pump) to start just to get to a game and enjoy the action, plus the time cost of inflating said device. All of this while facing the threat of confiscation and/or expulsion from the game, only to throw it on to the field in a vain effort to disrupt a team with a winning road record may not seem the best course of action. Yet, people have done dumber things with their time and money. If your bank account and empty life can stand it, I guess…go for it?