Right off the bat we see his BABIP has been fluctuating. On the season he has a .281 BABIP. But in the last 14 days his BABIP has fallen to .206. Clearly, Correa appears to have bumped into some bad luck here, especially when compared to his career .312 BABIP. But in the past 7 days he has rocketed back to a .350 BABIP. Not only that, but his Baseballsavant calculated xBA / xwOBA / xSLG is still .305 / .363 / .477, showing that he still has potential for a further rebound.

So though Correa's bad luck appears to be alleviating, there appears to be more to this slump and the evidence for this can be found in his line drive percentage. Prior to his 3 for 3 showing on May 12, his ability to hit line drives had fallen significantly across all pitch types from April to May. In April, he was at least hitting line drives on every pitch type with his fastball line drives at 7.58%. But from May 1 to May 11, the line drive percentage for every pitch type was at 0% except for Sinkers. This is a clear indicator that something had been off with Correa’s swing mechanics. However, after 5/12 he has been showing signs of recovery across most pitch categories as his swing mechanics begin to adjust.

Though its great to see Correa seemingly put things back together again, there appears to be a deeper more troubling trend with Correa and how he handles certain pitches. As recent as 2019, Correa was a very good hitter against off speed pitches. But in 2020 and 2021 he has not shown nearly the same level of production on offspeed pitches with his XBA, XSLG, and XWOBA all taking big dives. Check out the table below.

Contrast this to his performance off Fastballs, which has stayed relatively consistent over the last 3 years.

On top of that, pitchers appear to be taking notice and he is beginning to see an increasing diet of the offspeed pitches where he has shown weakness. 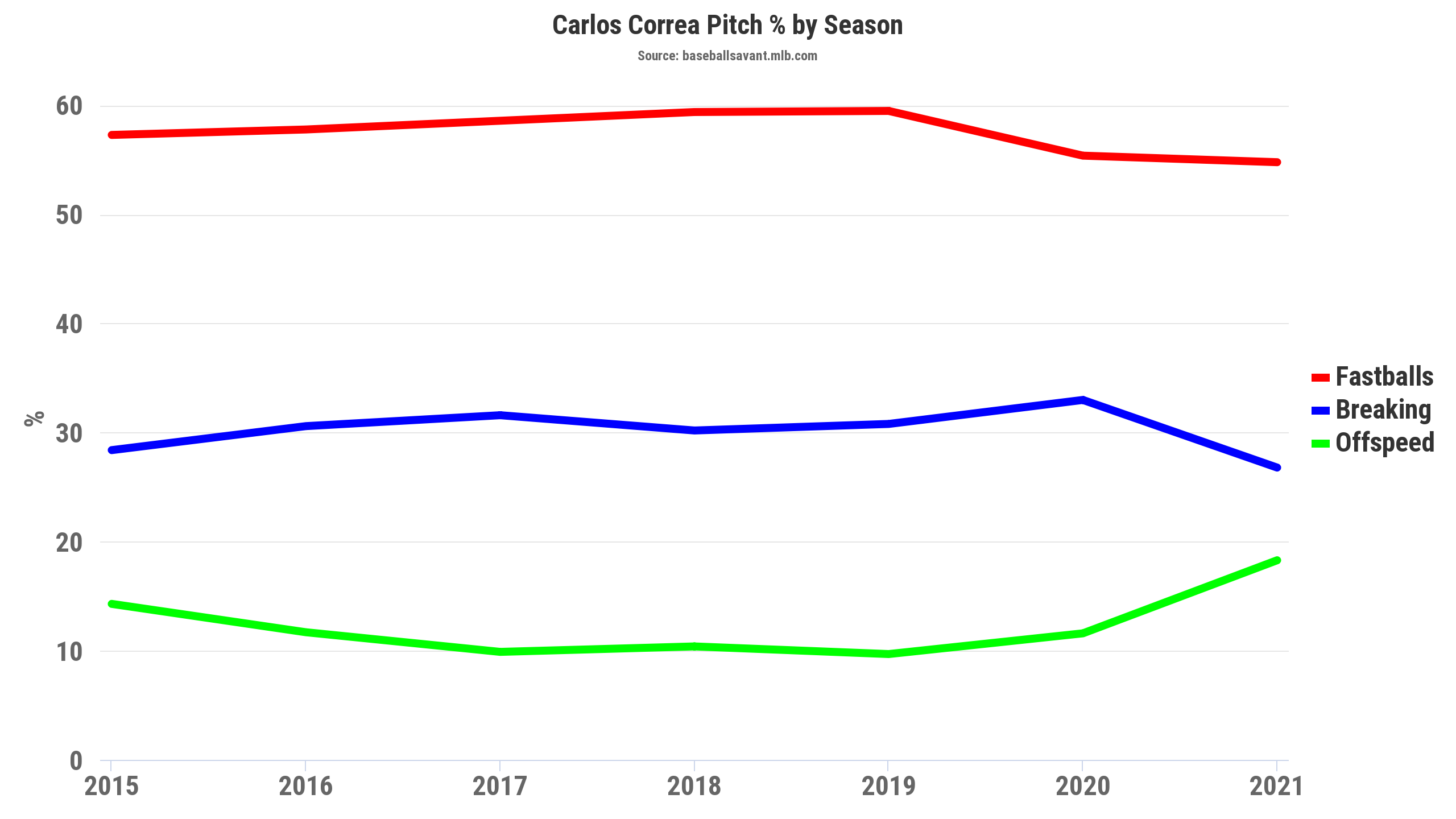 As we take stock of where Correa finds himself, it can be reasoned that a decent chunk of what Correa experienced in early May was bad luck and mechanics issues. In the last 7 days he has clearly made adjustments and is hitting the ball better. However, it will be important to keep an eye on how Correa adapts to this new weakness with offspeed pitches going forward and if this starts to really hold his performance back.

All data sourced in this article from: Baseballsavant.com, Brooksbaseball.net, and baseball-reference.com