On a late autumn night in 2017, José Altuve fielded a routine groundball, throwing it to Yuli Gurriel for the 4-3 putout. The ball was caught and a celebration ensued as Game 7 of the 2017 World Series came to a close, along with the 2017 MLB season.

For many on the Astros roster that year, it was a triumph long in the making. This had been Carlos Beltran's final real chance at winning a World Series. Brian McCann got to play in one for the first time. Justin Verlander finally won a ring after past failures. And the Houston Astros, once mocked with monikers like Lastros, were on top of the baseball world. 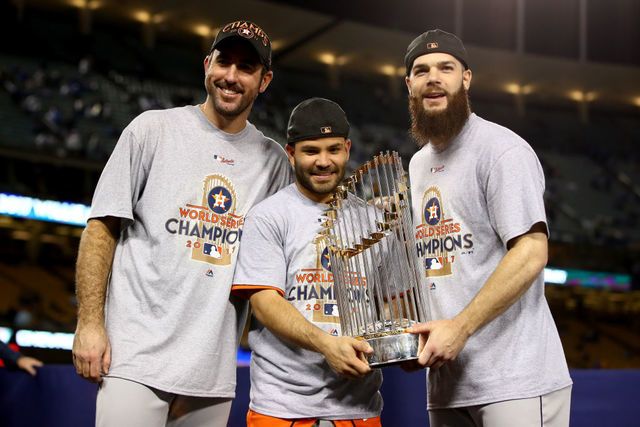 Verlander, Altuve, and Keuchel with the Commissioner's Trophy.

On November 12th, 2019 an article was published by The Athletic detailing how the Houston Astros had used technology to steal signs and relay them to hitters at the plate during their home games in 2017.This came on the heels of the Brandon Taubman situation, which had already made the Astros into an easily hateable team.

MLB conducted an investigation of the accusations by Mike Fiers, eventually handing down the harshest penalties ever issued by the league. AJ Hinch, Jeff Luhnow, and Alex Cora were fired from their positions with the Astros and Boston Red Sox, and Carlos Beltran resigned from his new management position with the New York Mets. The Astros were fined $5 million, and lost their first and second round picks for 2020 and 2021.

In the wake of the investigation, many things began to be discovered. The LA Times posted an article detailing that the sign stealing system was shockingly ineffective, with Astros hitters making outs as frequently as they would in their normal ABs. Additionally independent breakdowns were created of every bang of the trash can, and found that three players in particular barely used the system. These were Josh Reddick, Tony Kemp, and José Altuve.

Heading into the 2020 season, hatred for the Astros was dialed up to 11. This was a team that had made deep playoff runs for 3 straight seasons, won a title in one of them, as well as 2 pennants, all the while knocking off some of the largest fan bases in baseball while doing it. Naturally these fans now saw everything the Astros did, had done, or would do as illegitimate.

To their glee, the bulk of the Astros offense slumped throughout 2020. They weren't striking out at the plate, but hits were difficult to come by, and Dodgers and Yankees fans rejoiced at the news that Justin Verlander would be out for the season, along with Yordan Alvarez and our closer. Despite this, the Astros limped into the playoffs with a record under .500 for the first time since 2014.

None struggled more during this time than José Altuve.

Who is José Altuve?

It's an absurd question at this point to ask who José Altuve is, almost everyone in Houston has heard of him. The 2017 AL MVP, 3x batting champion, 5x silver slugger, 6x all-star... the list goes on. But who is he really? In 2007 two things happened. Craig Biggio announced his retirement, and a 16 year old José Altuve showed up at an Astros tryout camp in Venezuela. He was turned away, due to his height and because the scouts suspected that Altuve was younger than he said. The next day he returned, presented his birth certificate, and convinced Al Pedrique to give him a shot.

10 years later he fielded the final out of the World Series.

How he got there was more of a journey, suffering through 3 straight years of 100 loss seasons, a 92 loss season in 2014, before finally reaching the playoffs for the first time in 2015. Throughout that time he never complained, he never demanded a trade from Houston to a competitive team, he just played baseball and played it well.

What's evident about José Altuve is that he is a humble person. Celebrations are generally not initiated by him, he doesn't flip his bat, he doesn't start brawls, he doesn't make inflammatory statements to the media, he just plays baseball and plays it well.

Despite all of this, José Altuve is a common target for raging anti-Astros attacks from the national sports media, other players, and fans of other teams.

"He earned that MVP"

Those were the words Carlos Correa said to Ken Rosenthal after Cody Bellinger launched a tirade against the Houston Astros. What Carlos Correa says is correct. Every player says Altuve did not participate or even want to participate in the sign-stealing. The independent breakdown of every audible bang heard shows Altuve basically didn't use the system.

So why is it that José Altuve is a common target of criticism from others? After all, nobody targeted Derek Jeter after Alex Rodriguez was outed as a steroid user.

Two facts have to be considered.

1. José Altuve is the face of the Houston Astros.

2. A sizeable amount of sports fans are ignorant.

Despite evidence proving Altuve wanted nothing to do with the sign-stealing, he gets flak from fans for merely being on the team. At the same time, teams are eager to recruit former Astros players, and the fans of those teams cheer for those players as if they were not part of "ThE WoRSt SCanDaL sInCE tHE bLaCK SoX."

In the abstract of Willa Michener's article "The Individual Psychology of Group Hate" she describes revenge as "often taken against people who were not perpetrators of the original offense," because, "if one member of a group attacked, then they all did or would." In that case, the group is the Houston Astros, and the "people who were not perpetrators" is José Altuve. By virtue of simply belonging to the Houston Astros organization, being loved by the fanbase, he earns their hatred. "If they did it, why wouldn't he?"

This team had already proved it didn't need sign-stealing to help them over. They beat the Yankees with even greater ease in 2019, and came one AJ Hinch decision away from likely winning it all again. Yet they were the target of slander and baseless accusations. The Rays fanbase was convinced Tyler Glasnow was the victim of some top secret cheating in 2019. The A's fans are convinced that Mike Fiers only came forward after the Astros cheated against him. The Yankees fans are convinced they only lost because José Altuve was wearing a buzzer.

Despite expectations that they would literally finish last in their division, the Houston Astros made the playoffs whilst dealing with more injuries than almost any other team. They defeated the Minnesota Twins, something all 12 of MLB.com's "experts" said wouldn't happen. They defeated the Oakland Athletics, crushing them brutally, and reached their 4th straight ALCS.

That isn't even enough for the haters though. If the Astros lose to the Rays, they will still be mocked as failures.

What José Needs to Learn

What José needs to understand is that none of that matters. Winning the approval of other fans in baseball is not necessary because other fans aren't important. There are still plenty of people who deny Mike Trout's greatness. There are people who dog on Clayton Kershaw. Even Babe Ruth is slandered today as "having no chance" against today's pitchers. Other teams' fans do not matter.

He also needs to recognize that the system imported to the Astros by Carlos Beltran did not originate from Carlos Beltran. He was not some conniving genius twirling his mustache like a cartoon villain as he deployed his secret weapon against other teams. This is a widespread issue, other teams know it, other players know it, media members know it. These are the "important" people in the baseball world. So why is Altuve frequently their target?

The world has changed from the days of the early 2000s. Every postgame interview is available on twitter. Social media circulates inflammatory clips like a virus. News outlets focus more on stories that are "easy" because they get clicks rather than difficult stories that are interesting. I would be more than interested to hear about Randy Arozarena's background instead of the 25th article about how awful Correa is or how the apology wasn't good enough. They want juicy delicious ad revenue, that only massive amounts of clicks generate. What better way to generate clicks than to spend 2 minutes calling the Astros a disgrace? The media coverage does not matter.

Joe Kelly's actions this year were laughable. I'm also quite convinced he meant none of it; it was all for show. He wants to endear himself to the Dodgers fanbase, what better way to do it than to trash the team that humiliated them in 2017? Here's a fact. Joe Kelly won a World Series ring by playing with a team who cheated. The 2018 Red Sox cheated, with Alex Cora bringing over Beltran's system and employing it there.

Aaron Judge deleted his tweet congratulating José Altuve on winning the AL MVP. Egad! What a statement! Except Aaron Judge's New York Yankees cheated in 2017 by illegally stealing signs, being punished alongside the Boston Red Sox, who also did it in 2017.

Cody Bellinger attacked the Houston Astros for being cheaters who don't deserve their title. Except he has nothing to say about Mookie Betts, who cheated in 2018, beat the Dodgers, and now plays alongside him.

These are not serious people, not that they're clowns, but that they literally aren't serious. This is an act, the same way so many post-game interviews from players are staged acts, where they give rehearsed generic answers to sound classy and non-controversial. These guys want the fans to love them. They will say anything to get the fans to love them. The opinions of "outraged" players do not matter.

Altuve isn't going to please other teams' fans. The irrational hatred they have for him won't go away anytime soon. He also needs to understand that the important people in the baseball world, the ones who really matter and who will actually have a long-term impact on José Altuve's legacy do not despise him. Altuve will be in the Hall of Fame. His number will be retired by the Astros. He will be a consultant for the team for decades. The crowd will roar when he throws out the first pitch of a big game.

What Joe Kelly says and what Joe Kelly knows are two different things. Same for Aaron Judge and Cody Bellinger and Stan Van Gundy. Here's what they know.

José Altuve has nothing to prove.