The tables that follow detail how 2019 Astros minor league pitchers have performed so far relative to their full-season league(s)'s starting pitcher or relief pitcher qualifiers per my Fielding and Ballpark-Independent Outcomes (FaBIO) statistical evaluation system. Click here to conjure up the offseason FanPost featuring the results of all 2018 organizational MiLB pitchers.

Each non-bunt, non-pitcher-batting plate appearance is sorted into 1 of the following 12 categories, and the pitcher is charged with the league's typical 2018 (prior season) runs value for said event.

Each pitcher's final runs per plate appearance value is compared to the league peer group's mean and standard deviation for that parameter to obtain their Overall Rating, which can be further split to examine how the pitcher performed versus Opposite-Handed Batters (OHB) and versus Same-Handed Batters (SHB). A Batted Ball Rating is determined similarly after omitting all BB+HBP and K events (individual components of the Batted Ball Rating are also computed such as GB Rating, IFFB Rating, etc., using GB per batted ball, IFFB per batted ball, ... to better assess its origins and sustainability). A Control (CTL) Rating (using BB+HBP per PA) and K Rating (using K per PA) are also determined. A Youth Rating is determined by comparing the pitcher's age relative to the mean and standard deviation (SD) for that role (SP or RP) in their league (the reliever sample in a league tends to be a year or two older, on average).

Each rating will be expressed on a 100 to 0 scale where the number indicates the expected percentage of league peers beaten on the stat. 50 denotes league-average with 84 being one SD above average ("plus"), 97 being 2 SD above average ("plus plus"), 16 being one SD below average ("minus"), and 3 being 2 SD below average ("minus minus"). In the tables that follow, an asterisk after the name denotes a southpaw, and a green number indicates a plus or better rating while a red one indicates a minus or worse rating.

A and Advanced A (A+) ratings are up-to-date through games of June 30. AA and AAA ratings are through July 7. 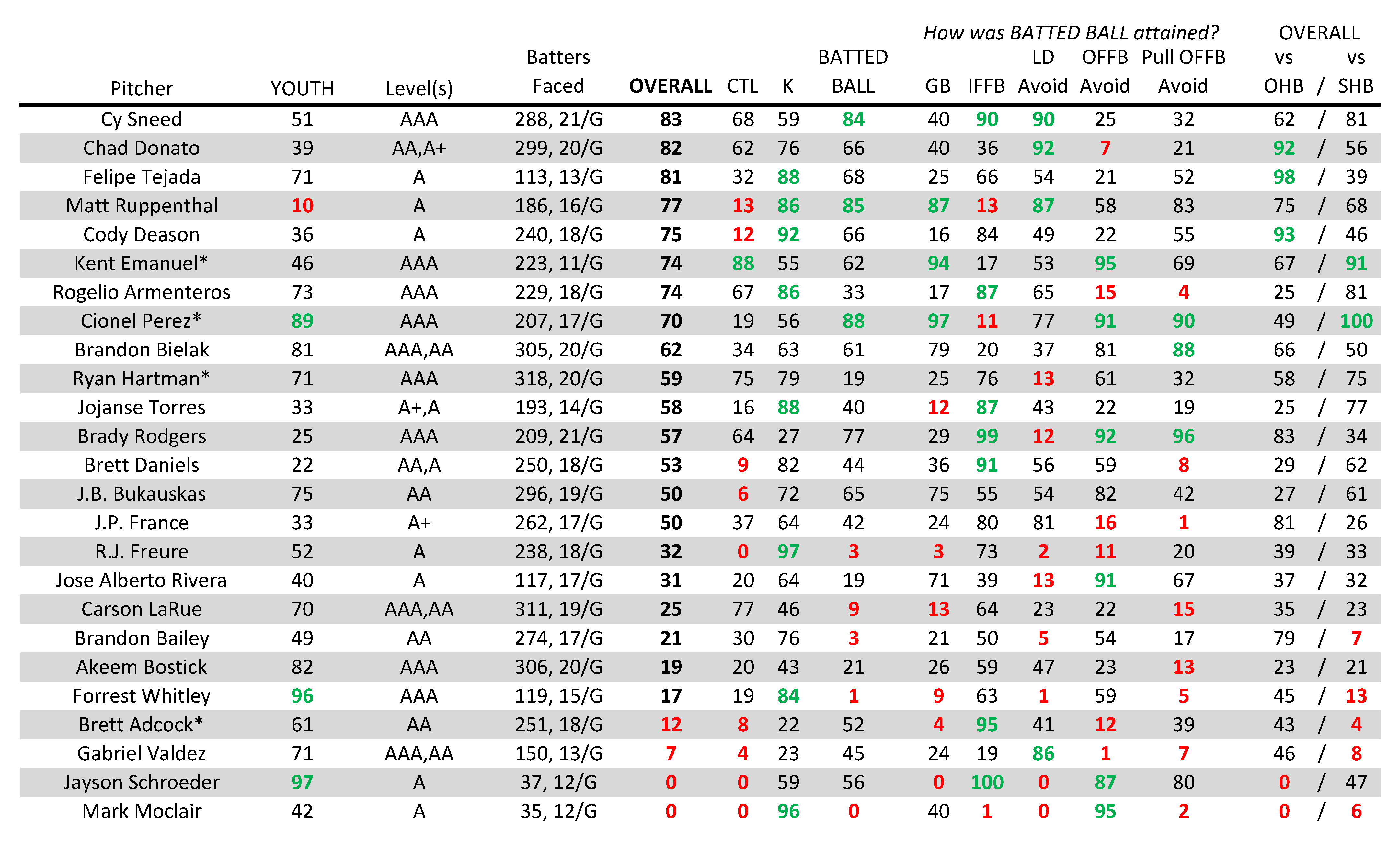 Even with the large performance declines of top SP prospects Forrest Whitley (17 Overall) and J.B. Bukauskas (50 Overall) and injuries curtailing 1st-half workloads of several of its other more startery prospects (Corbin Martin, Tyler Ivey, Peter Solomon), the organization remains top of the scale at eliciting FaBIO-style fundamentally-rooted performance out of its minor league pitchers. The downsides of those cited negatives and the first-third relegation of Framber Valdez to sporadic MLB RP duty are that there a few viable internal MLB SP candidates for what remains of 2019 and the organization's potentially most valuable MiLB pitching trade chips have depressed values versus the offseason. 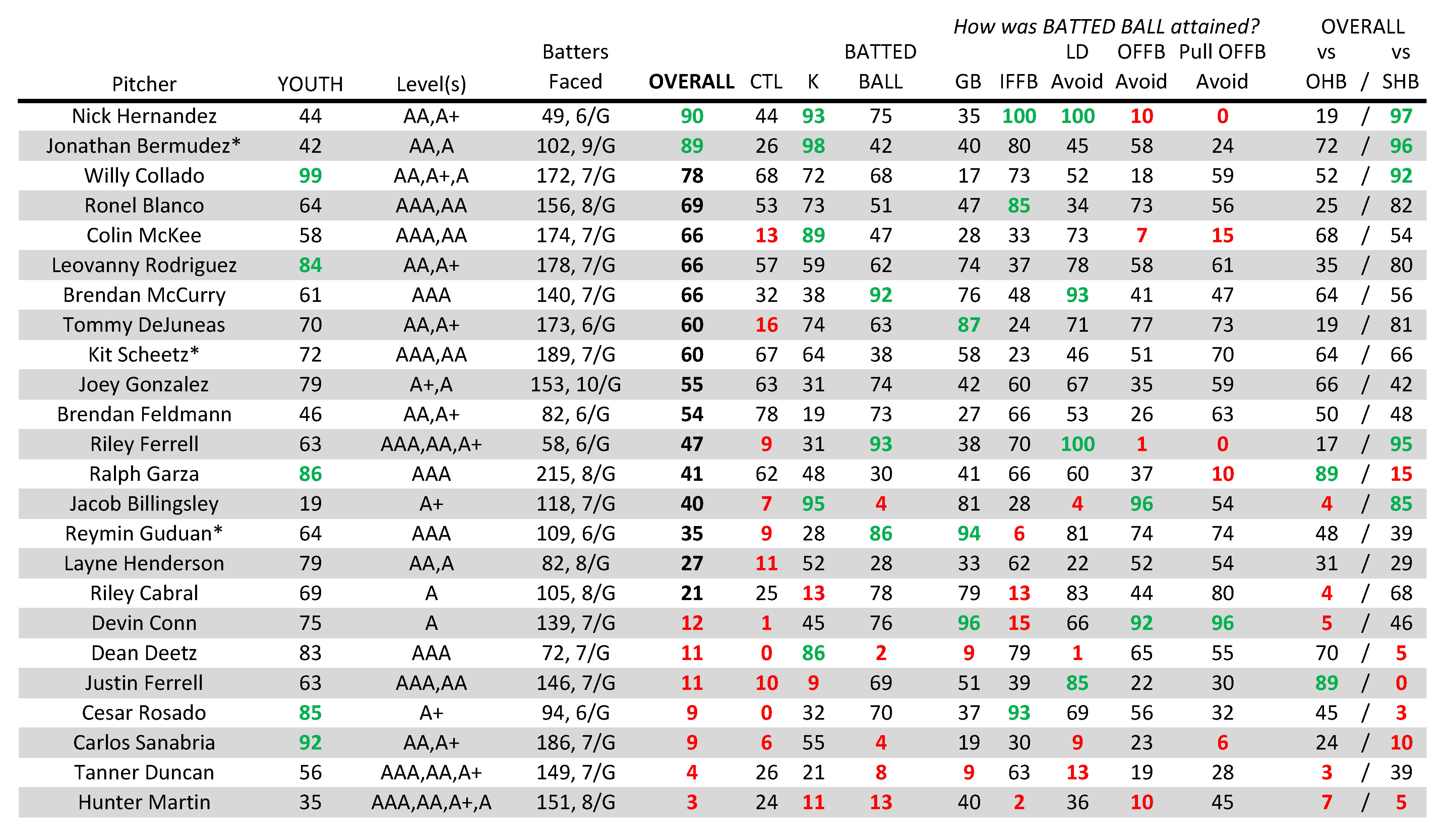 Spring training standout Reymin Guduan appears to be nearing the end of the line with the organization, as the out-of-options for 2020 southpaw is no longer even faring well vs LHB (as he had done in recent seasons). In the pending return from injury Dean Deetz must rehab his formerly strong batted ball profile to re-enter the MLB bullpen picture for 2020.

Who among these candidates earns your vote for Astros Minor League Pitcher of the 2019 First-Half?