Max Stassi? I Don't Know Who That Is.

In August of 2017, my wife and I brought our 20-month-old son, adorned in a bright orange Altuve T-shirt and a matching blue Astros cap to Minute Maid Park for Houston Astros Photo Day. Our roles were clear. My son would get the attention of an Astros player (Little children are the best player magnets for events like these), I would hand him to the player, and my wife would take the pictures.

Today, as big an Astros fan as anyone, my wife can recite the Astros 25-man roster. But at that time, her familiarity with the players was limited largely to Jose Altuve, Carlos Correa, and Dallas Keuchel. So anyone wearing an Astros jersey, she snapped photos of, and we would sort them out later.

She took a lot of pictures of one player in particular: a pleasant, 5’10" bearded man. 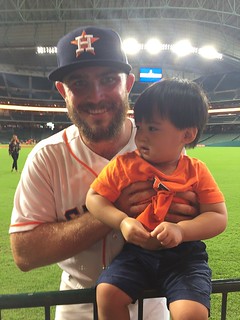 Contrary to the title of this article, the little one is more valuable.

"You sure took a lot of pictures of Max Stassi," I commented, flipping through the photos on her phone.

"Max Stassi? I don’t know who that is," she answered, "Is he just like a backup or someone?"

"He is the backup to the backup. . . to the backup. Our usual catchers Brian McCann and Evan Gattis are hurt, so we have this guy Juan Centeno and behind him, Max Stassi."

The following season, Max Stassi would go on to be the most valuable catcher in the league. And nobody would realize it.

Being buried down in the depth chart of the Astros organization was a familiar position for Stassi, and would continue to be. That year in 2017, The Astros would go on to carry three catchers on their postseason and eventual World Series-winning roster. Stassi was fourth in line behind McCann, Gattis, and Centeno, and was left off.

The following season, opportunities arose for Stassi. Gattis was being transitioned to a full-time designated hitter. Centeno was waived and claimed by the Texas Rangers, leaving Stassi as the primary backup to Brian McCann. Knee injuries would limit McCann, and the occasional start behind the plate for Stassi soon turned into regular starts.

Despite having played in big league games for Houston for 5 consecutive years, starting in 2013, Stassi had not yet exceeded his rookie limits, coming into 2018. At the age of 27, 2018 would officially be his rookie season. He would play in 88 games, starting 64, and logging 250 plate appearances.

He did not appear to standout offensively nor defensively. Despite some early season hitting success against left-handed pitching, by the end of the season, he sported an underwhelming .228 batting average, with an WRC+ and OPS+ of 100 and 96, the definition of average to near average for a position player. Behind the plate, he would throw out 11 of 43 base runners (25.6%). Respectable, but a shade below the major league average of 27.9%.

The Astros would make a trade with the Los Angeles Angels (of Anaheim) to obtain Martin Maldonado, a Gold Glove catcher. In 2018, Maldonado would throw out 17 of 35 would-be base-stealers, a gaudy 48.6%. Heading into October, Stassi again would find himself left off the postseason roster, backup to the backup.

This past offseason, every player Stassi found himself buried behind on the depth chart would leave the organization. McCann would return as a free agent to his hometown Atlanta Braves. Maldonado would join the Kansas City Royals as a free agent. Gattis, still unsigned as a free agent as of this writing, would not be brought back by Houston.

With Stassi their remaining primary option at catcher, the Houston Astros sought an alternative, or at least additional help. They offered a 2-year contract, reportedly, to Maldonado, who declined. (Maldonado would later go on to fire his agent, Scott Boras as he would ultimately settle for far less with the Royals.) Rumors persisted that the Astros were in discussion with the Miami Marlins about obtaining All-Star catcher J.T. Realmuto, who would eventually be dealt to the Philadelphia Phillies, Houston unwilling to part with either of their top two prospects. In the end, they signed free agent Robinson Chirinos, previously of the Texas Rangers, who as recently as 2017, had an impressive WRC+ and OPS+ of 124 and 120 respectively.

The plan would be for Chirinos and Stassi to split starts 50/50, but when opening day came, it would be Chirinos who would have the distinction of being the opening day starter, with Stassi in his familiar backup role.

The Most Valuable Catcher in the League

Being a backup should not be that surprising for Stassi. After all, in his first season, there was nothing very glamorous to his game. He was at best an average hitter, and maybe a little below average in controlling the running game defensively.

Until March 20, 2019, when Fangraphs, the Mecca of baseball analytics, updated their Fangraphs Wins Above Replacement (fWAR) formula that measures how valuable a player was to winning ballgames. The formula now incorporated catcher framing, the ability of a catcher to receive a borderline pitch and position his glove and body in such a way that the pitch is called a strike, rather than a ball.

In the major leagues, Stassi would rank 4th in fWAR, with 3 catchers in the NL ahead of him:

The 3 players ahead all had significantly more playing time than Stassi. The top 2, had over double the plate appearances that Stassi had, yet did not accrue double the fWAR Stassi would, including Realmuto, the prize catcher trade target of the offseason.

StatCorner and Baseball Prospectus feature the most popular ways to measure framing. They are complex formulas, both beyond the scope of this article, and conceivably beyond the scope of this author’s mathematical energy. Fangraphs summarizes it well, explaining that every pitch, based on its location in or from the strike zone, has a certain probability of being called a ball or a strike. Catchers who get more strike calls than probability would suggest are considered to be better framers.

The model is not perfect, by any means. Some umpires have larger strike zones than others. A catcher catching pitches on a day when Bill Mueller, famous for his larger strike zone, is behind home plate will seem like an excellent framer.

Compare that scenario to pitch number 5 in the below graphic, thrown by Gerrit Cole to Joey Gallo of the Rangers, received by Stassi this past Wednesday, April 3rd. 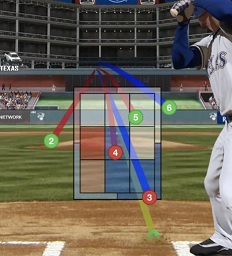 Just a bit down the middle...

What should have been strike 3 was called ball 3 by home plate umpire Ron Kulpa. "Mea Kulpa" on the umpire certainly, but when the data is crunched, it will simply appear as if Stassi was phenomenally terrible at framing that pitch.

Hopefully, over the course of a season or a career, variations in who is umpiring home plate even out, though. If a catcher can have an impact how borderline pitches are called, it can make the difference between a 3-1 count and a 2-2 count, and swing the at-bat in the defense’s favor. If he can do that over and over through countless pitches over dozens of dozens of games, he can essentially manipulate the home plate umpire, whose job it is to make sure the game is fair, to calling a game unfairly in his team’s favor.

Stassi is playing mind games with the umpire, positioning his body and glove in such a way that makes the umpire think a pitch is a strike when it might not necessarily be, and in a way that the umpire is none the wiser, thinking it was his call, uninfluenced. Stassi is Leonardo DiCaprio and he is practicing inception on umpires on a near daily basis.

It is easy to overlook Max Stassi. Almost everyone has, possibly including his own organization. When you buy Topps baseball cards, they feature action shots of players hitting, throwing, fielding, and running. None of which Stassi is a standout at, or even average at. There is no action shot of a catcher "framing." Stassi’s greatest talent is a skill which he doesn’t want people to know he performed. He sits behind a mask, and catches a ball offering suggestions to man who doesn’t know he is being suggested to.

He is the best catcher at catching a ball.

It may only be half a season’s worth of data, but Stassi has come out on top. Maybe he doesn’t need to be the backup to the backup anymore. Maybe the number one catcher in the league needs to start.