Revenge of the Tandem: Why Starters and Relievers Need To Go (Part I)

Starting pitchers getting worse each subsequent time through the order? Relief pitchers lacking consistency? Why tandem pitching should be the way of the future.

Share All sharing options for: Revenge of the Tandem: Why Starters and Relievers Need To Go (Part I)

Note: This pair of articles is intended to stoke discussions about tandem rotations, and the one in which I make the case for tandems should follow soon (this one is about starters and relievers as currently constructed). I started working on this pair of articles last spring, so all stats, unless specified otherwise, are 2015. The conclusion hasn't changed, however.

Back in 2013, the Astros employed tandem rotations for their minor league teams, an experiment previously used by the Colorado Rockies and previously employed by Tony La Russa in the early '90's. All three experiments were soon scrapped (the one used by the Astros was changed and then thrown out), and the same goes for other unidentified experiments with paired pitching. The first question is: why did they fail? One reason is the probable need of a thirteenth pitcher on every team (i.e., the mop-up guy). Another is more related to money: no one will be racking up wins or saves (but saves are obviously awful for baseball), leading to less money in the free-agent market. But we here at the Crawfish Boxes live in an ideal world. One where paired pitching is possible, J.D. Martinez is still an Astro, and Jeff Bagwell is in the Hall of Fame (man, I started this a while ago). So let's explore paired/tandem/piggyback pitching, beginning with why anyone in the world ever thought it was a good idea.

Starting pitchers get worse as games go on

Look no further than this chart of 2015 starters as they proceed through the order once, twice, and thrice (w/r/t tOPS+:<100=good for pitcher; >100=bad for pitcher, and it's performance relative to to doing better/worse than usual):

But don't take my word (or, I guess BBREF's word) for it--check out this super amazing article by Mitchel Lichtman over at BP, where he discusses wOBA-against in a multitude of ways (this is 1999-2002):

As stated by Lichtman, pitchers who make their way through the order for a 3rd (and even 4th) time are, on the whole, better than their counterparts. Therefore, when he judged for pitcher quality, these results appeared:

Judging by this chart, you can see that wOBA is below expected for the first time through the PA, and it jumps by .001 for the 2nd and 4th+ time. Yet for the third PA, it jumps by .008.

This data does have a larger sample size (but not necessarily more impactful, except for possibly 4+). As evidenced by this, wOBA jumps up to be more than expected by at least .01 for each time through the order.

Lichtman has quite a bit more to talk about, so check it out (along with his follow-up article on pitchers' repertoires). BP does in fact have more articles with similar topics. Ken Funck, for example, put up an article in 2009 about tandem pitchers, in which he referenced the performance of pitchers in trips through the order. The 2006-2008 stats of all starting pitchers:

An obvious jump exists here as well, unsurprisingly. Both the wOBA and OPS jumps are pronounced. To put the OPS jump in context, it's like having Nick Markakis (2016 OPS: .744) turn into Carlos Correa (2016 OPS: .811) just by going through the order two extra times.

Funck wondered whether or not those stats were being influenced by "bad starters", so he checked out the stats while only including pitchers with 40+ total starts (143 of those pitchers) in the same era:

This one's a little better, but take a look at the 1st & 3rd TTTO for both wOBA and OPS. They show a similar jump (.066 in the first chart and .061 in the second for OPS, and .024 in the first and .02 in the second for wOBA). This led to Funck's suggestion of implementing a tandem rotation (more on that later!)

Russell Carlton addressed a similar topic, this time wondering about how many pitchers can go late in games. First, he explored how deep starters went into games (in 2012):

The mean number of outs is 17.4 and the median is 18, suggesting most pitchers make it through between 5-7 innings per outing. This is consistent with what most people assume about starters. Interestingly enough, Carleton discovered that, in 2012, more starts lasted four innings or fewer (12.7%) than lasted past the seventh inning (12.0%), suggesting that good starts are becoming less likely.

Looking at pitcher quality and perseverance made me wonder about a point brought up in Scorecasting (and probably other places as well), which is that ace pitchers are usually defined as those who are able to make their way through more innings than the average pitcher without getting shelled. Here is how the pitchers with a SIERA of 3.00 and under performed in 2015 (sOPS+ has the same rules as tOPS+, except it's adjusted for the league):

And here's how they did (same order as above) relative to the rest of the league (as far as vs. OPS/tOPS+ for that trip through the order and league OPS/tOPS+ as a whole, respectively):

As a whole, that group performed rather well, and here are the averages of those groups versus the rest of the league:

Now, in the interest of fairness, I then chose the nine worst (as opposed to the above nine best) in 2015, at least as far as SIERA. Behold:

And now, the averages (exact same format as the chart above):

Some of the above are, of course, subject to small sample size, but as a whole, the data seem to support the hypothesis that, in fact, better pitchers tend to perform better than lesser-skilled pitchers if left in longer. Now, back to the topic at hand.

Why relief pitchers are inconsistent

Everyone moans about it. Relief pitchers are inconsistent, don't succeed from year to year, and pop up out of nowhere to have shutdown seasons before disappearing into the ether. And that is what makes this line (from 2015) so tempting yet so awful:

Yup, that's an OPS which is .01 better than a starter's first TTTO, and .065 better than their third.

If only relief pitchers could somehow sustain this achievement. An OPS below .700! Only 38 starters matched or beat that mark, and yet the mark above is an average of all relievers in baseball (that includes pitchers like Tanner Scheppers and Jason Motte). Of course, as stated above, that is but a mirage. Relievers are less consistent than the Astros' ability to score runners from third base. Our sister site Athletics Nation summed it up rather succintly: 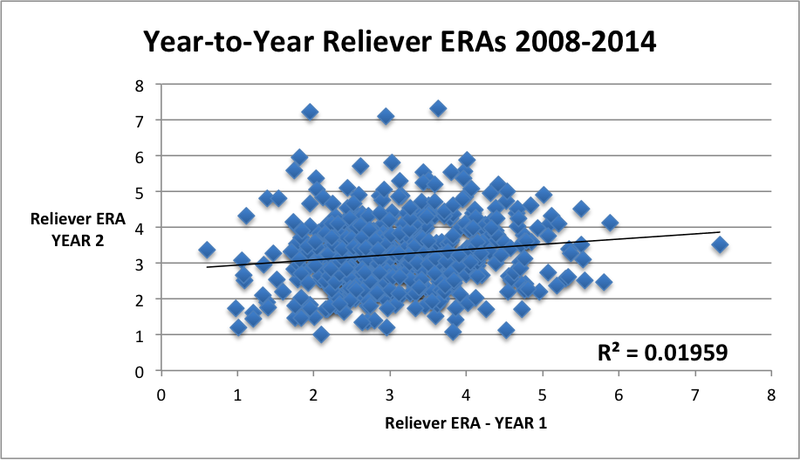 Relievers, as can be seen by the R^2 factor of 0.02 (a perfect correlation is 1), are wildly inconsistent from season to season. Even the top relievers are inconsistent. Twenty-five relievers earned 2+ fWAR in at least one season between 2011-2015:

Of those twenty-five pitchers, only three made the top five twice (Craig Kimbrel, Aroldis Chapman, and Kenley Jansen), and none made it thrice. In fact, only three pitchers even reached 2 fWAR thrice.

Teams, not surprisingly, show no more consistency than do individual relievers. Bullpens fluctuate constantly, and BTBS put out an article in September 2014 detailing the fluctuation of team FIP- from month to month:

I mean, just take a look at the Astros from April through June. A drop of 53 from April to May, with a sudden jump of 24 in June? And poor Minnesota. After losing 27 FIP points in July, they jumped up a staggering 61 points in August. They had the fourth-best bullpen in July, and, ignominiously, were the flat-out worst in August.

To more easily understand the volatility, see this accompanying graph:

I then decided to check out team SIERA in 2015, and sure enough, more change was at hand:

The Astros may have, by a hair, had the best bullpen in baseball, but that didn't stop them from, after having an average of 2.59 over the first two months, averaging 3.725 over the next two. And despite the Padres having the second-worst bullpen in April, theirs was suddenly tied for second-best in May.

So, to sum it all up, pitchers don't last that long and relievers are rather inconsistent. Now, how can paired pitching fix both of these problems? That's for the next installment.