Baseball is a long season. Say it with me nice and slow. One hundred and sixty-two games. MLB teams play twice as many games as NBA teams, and over ten times as many games as NFL teams. So why even bother watching the Astros until the heat of the summer? Surely, the first two months don't mean much. There are still over 100 games left to play at that point.

However, the way a team starts the season (even just the first 30 games) may be more meaningful then you think. Let's take a look.

The graph below shows how well (or poorly) each playoff team performed through their first 30 games, going back to 2000. The bigger bubbles indicate multiple teams with the same winning percentage. 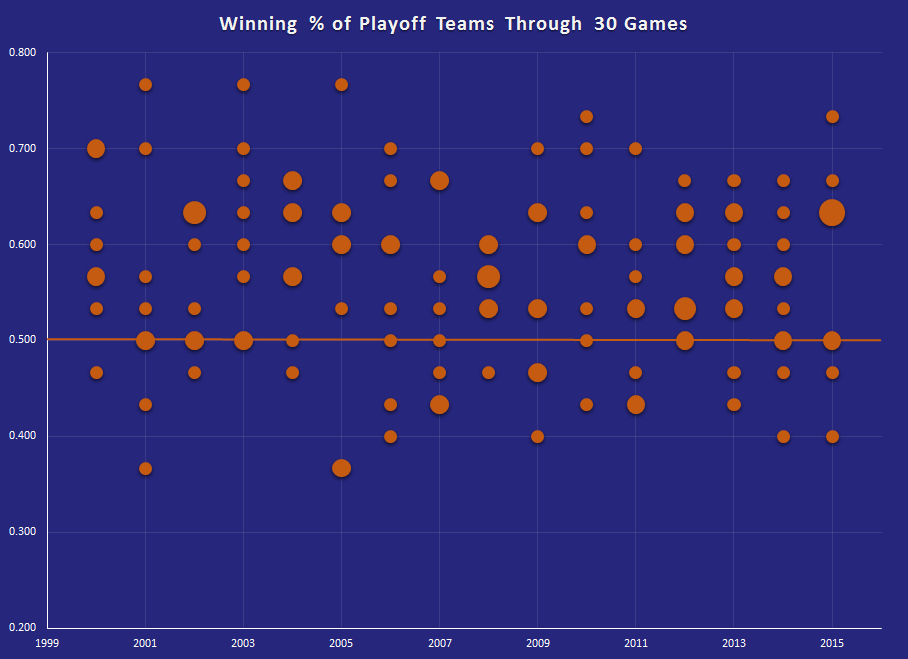 The clear takeaway is that you don't want to be on the wrong side of the orange line (which marks a .500 winning percentage) when Game #31 rolls around. 81% of the teams that made the playoffs from 2000-2015 were playing at least .500 baseball through their first 30 games. That's not even 1/5th of the season, but if you've got a losing record, you now have only a 19% chance of making the playoffs.

Ok, so a losing record in April puts you in a tough spot, but a winning record through your first 30 games doesn't guarantee you much, right? Well, it depends on how good of an April you have. The Astros won 19 of their first 30 games last year and were still being written off by... well, everyone (except TCB of course). From 2000-2011, with only one wild card per league, 54% of teams who started 19-11 or better made the playoffs. Since the addition of the second wild card, 74% of teams that began 19-11 or better made the playoffs. A 74% chance of playing October baseball after only 30 games sounds pretty good to me.

The implications get even more severe after 60 games. 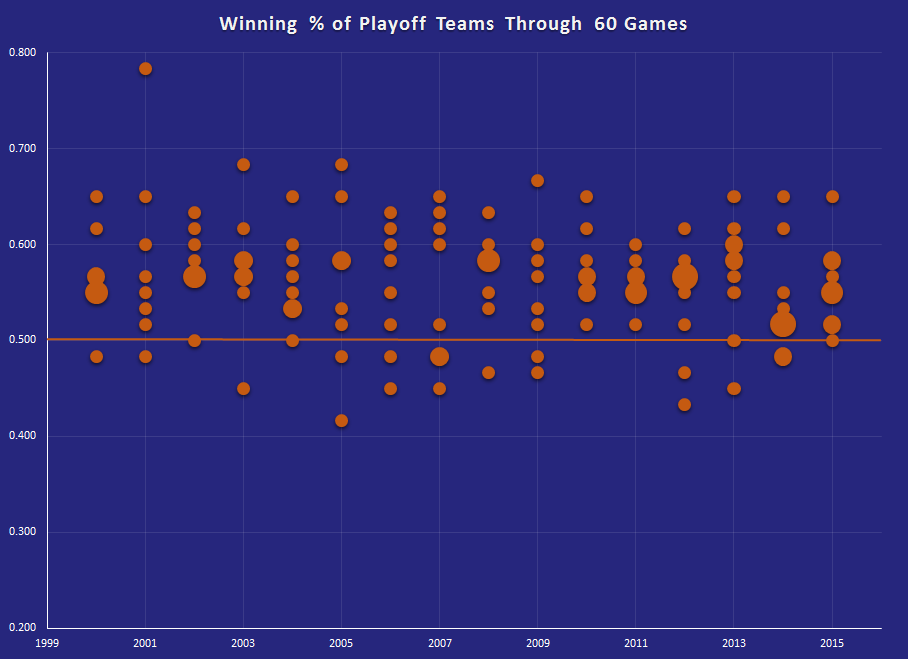 Before you do anything else, find the lowest dot on this graph. You know what that dot represents. Admire it. Let it bring back memories. Now, think about making even better memories this October when we finish the job.

Daydreaming aside, the winning percentages of playoff teams have begun to converge after 60 games. No team in the last 16 years has made the playoffs after playing .400 baseball through the first 60 games of the season, even though ONE HUNDRED AND TWO games still remained. In fact, in five of the seasons shown above, not a single team with a losing record after 60 games made the playoffs.

Furthermore, 76% of teams with a winning percentage greater than .600 through their first 60 have made the playoffs since 2000. Since the addition of the 2nd wild card in 2012, only 1 team has played better than .600 ball through 60 games and missed the playoffs (2012 Dodgers).

There are many implications of a hot start to the season. It gives players confidence and makes it easier for them to believe they have what it takes to go the distance. It gives the front office the confidence to be buyers and not sellers at the trade deadline. Most importantly, it puts the team in a great position to make the playoffs.

With a young, energetic group that hasn't changed much since last October, I expect the Astros to start the season with determination and talent that will outmatch the competition. Call me an optimist, but I think they'll win 18 or more of their first 30 games. What do you think?

How many wins will the Astros have after 30 games this season?