Having a look at the Astros' pitching staff through some cool visuals, courtesy of Kevin Dame.

Share All sharing options for: Visualizing the Astros' pitching staff through Paintomatics

We've all been there: bleary eyed, clicked on Dallas Keuchel's Fangraphs page, desperately trying to come to some kind of conclusion as to how good he is, how good his last season was, or how good he will be next year. Somewhere in the mass of data and statistics displayed exists your answer; but you can't find it.

Sifting through the information can be fun, but it can also be tiring. Tiring on both the eyes and the brain. And so, having something like Kevin Dame's Paintomatics can be a lifesaver. As displayed over at the Hardball Times, the graphic is a simple, yet informative, way of unlocking insight that's hidden in the reams of data, spreadsheets and statistics.

Essentially, there are a couple of key things to know about Paintomatics before we have a look at how it portrays the Astros' pitchers. In terms of colour coding, think the opposite of traffic lights, but with a blue light that means you can never move. Red is the best. Orange is great. Green is good. Light blue is not great. Last, dark blue is awful. Or, to put it a lot more eloquently, courtesy of Kevin Dame, the warmer the colour the better, the cooler the worse. And, what does it depict?

In the redesign of Paintomatic, I wanted to visualize and blend together two essential parts of performance: process and outcomes. Process – the factors within the pitcher’s control – are pitch selection and usage, movement, and speed. The outcomes – quantified by Pitch Value – are represented via color. In blending these elements together, my goal is to create an easy-to-digest snapshot that describes the pitcher and what he throws. I think there’s a need for this blend of process and outcomes, visualized in an easy-to-understand format.

Going into the season, the Astros figure to use the following six pitchers in the rotation during the first few months of the season (barring any disaster, of course): Dallas Keuchel, Lance McCullers Jr, Collin McHugh, Scott Feldman, Doug Fister, and Mike Fiers. First up, this is how our resident ace, Dallas Keuchel, looks through the eyes of Paintomatics (using last seasons numbers).

As expected, the Cy Young winner looks rather impressive. There is a complete absence of blue, and three of his five pitches register as red. His two seam fastball, slider, and changeup are all extremely valuable pitches. His cutter and his four seam fastball are all good pitches, too. Perhaps the most noteworthy thing here is that, unsurprisingly, Keuchel seems to have a very strong understanding of what works for him, as his three best pitches are used the majority of the time. Onto Lance McCullers.

Lance McCullers isn't too far away from Keuchel on his Paintomatic, which reflects just how good his rookie season was, and good he may very well be. Just like Keuchel, he has three deadly pitches, paired with two lesser pitches. Of course, McCullers' lesser pitchers are around average, lower than Keuchel's, so there is plenty of room for improvement. He has a devastating knuckle-curve which he throws a lot. The only issue that can be had with McCuller is that his most used pitch, his fastball which registers an average 94 on the gun, has plenty of room for improvement. Expect big things from his sophomore campaign, though.

There is a complete lack of blue, but also a complete lack of red, which almost perfectly sums up Collin McHugh: he isn't an ace, but he sure is a quality pitcher. With a fastball, cutter, slider, and changeup that are all good pitches, with a huge variance in movement between them, he already has an impressive repertoire. However, on top of that, he has that curveball. The movement is quite simply ridiculous. I mean, it nearly falls of the chart, and it's a rather warm shade of orange. He also has a strong balance in his pitch usage; you certainly can't sit on any one pitch. Despite getting shelled against the Yankees, I'd guess he'll be just fine this season. 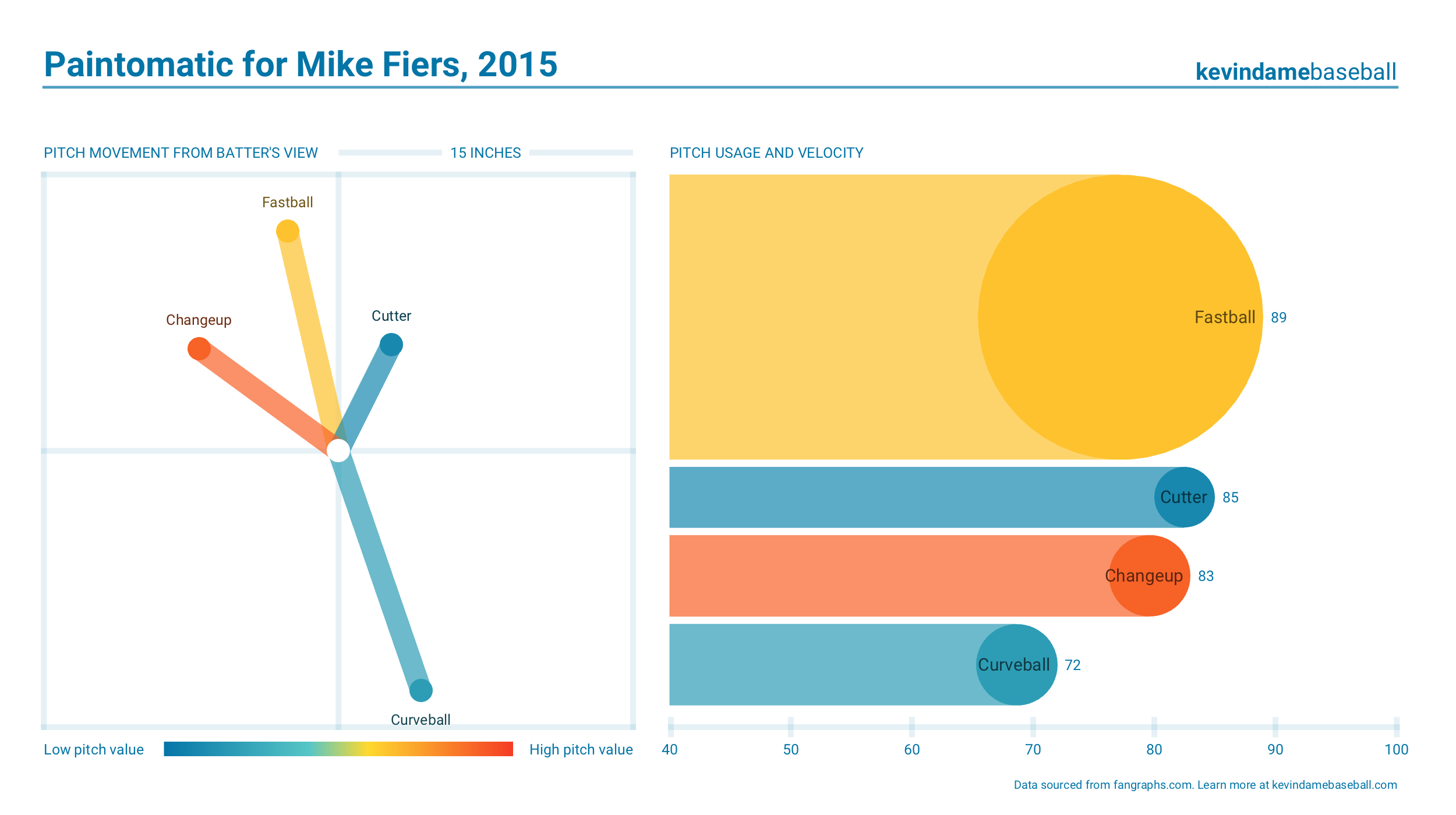 Mike Fiers is the first pitcher thus far to deviate from the "yeah, he's pretty darn good" narrative. He has a strong fastball, which registers 89, on average, on the gun. He uses this fastball a lot, and you can't really blame him, either. He has a really good changeup, too, which he uses a fair bit. However, his cutter and curveball need a lot of work. His curveball may have ridiculous movement, but it hasn't had great outcomes. The same goes for his cutter. On the whole, his repertoire is okay; two good pitches, two not so good pitches. 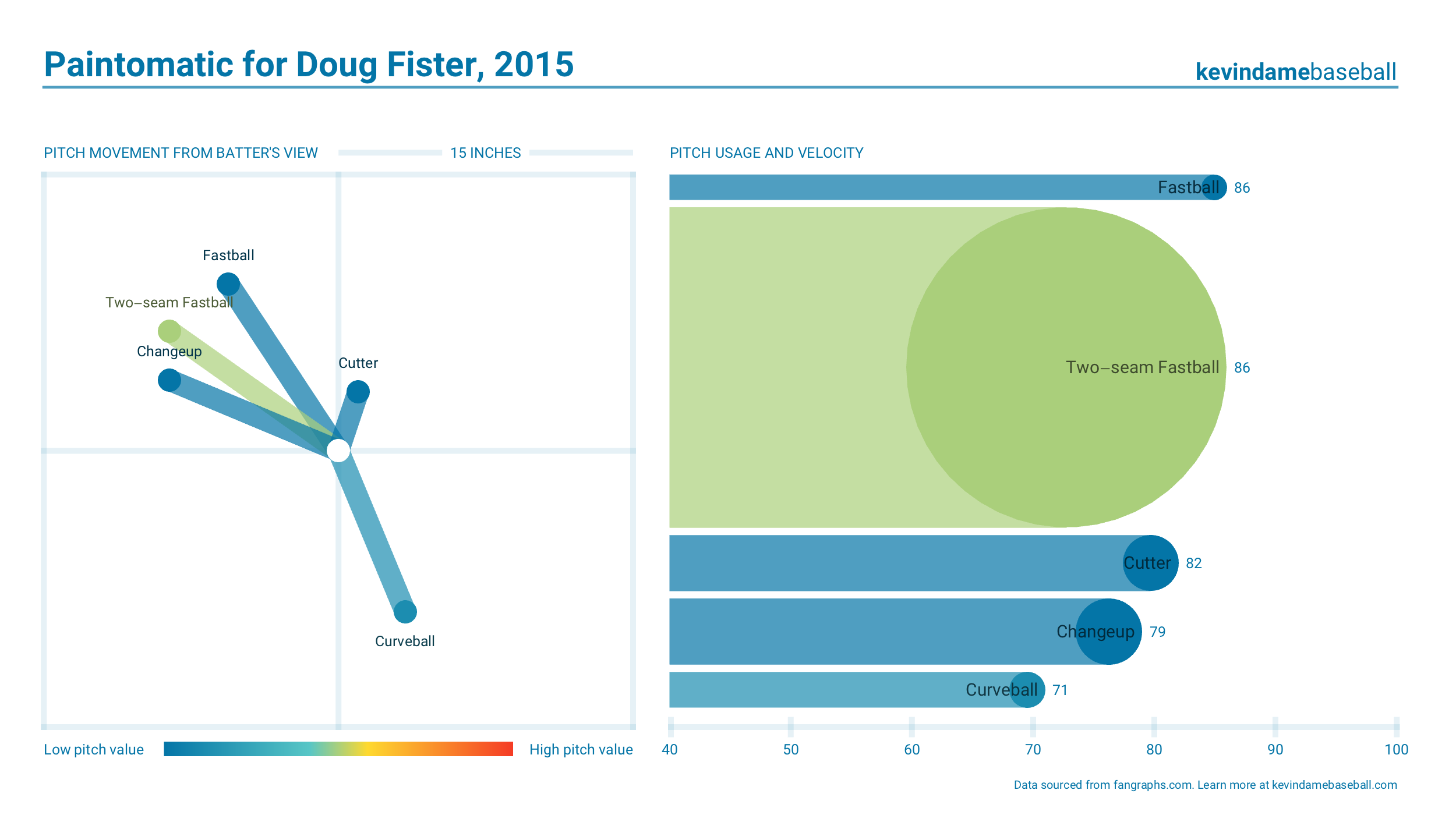 As one may very well have anticipated, Doug Fister's Paintomatic is not a sight for sore eyes. His best pitch, his two seam fastball (which he used all of the time), was just okay. He used that alongside an awful cutter, an awful fastball, an awful changeup, and an awful curveball. But, the Astros didn't sign him because of what he did last year; we all knew he had a huge down year. A rather cold looking Paintomatic doesn't paint Fister in the best light. He will need to have a resurgent season. 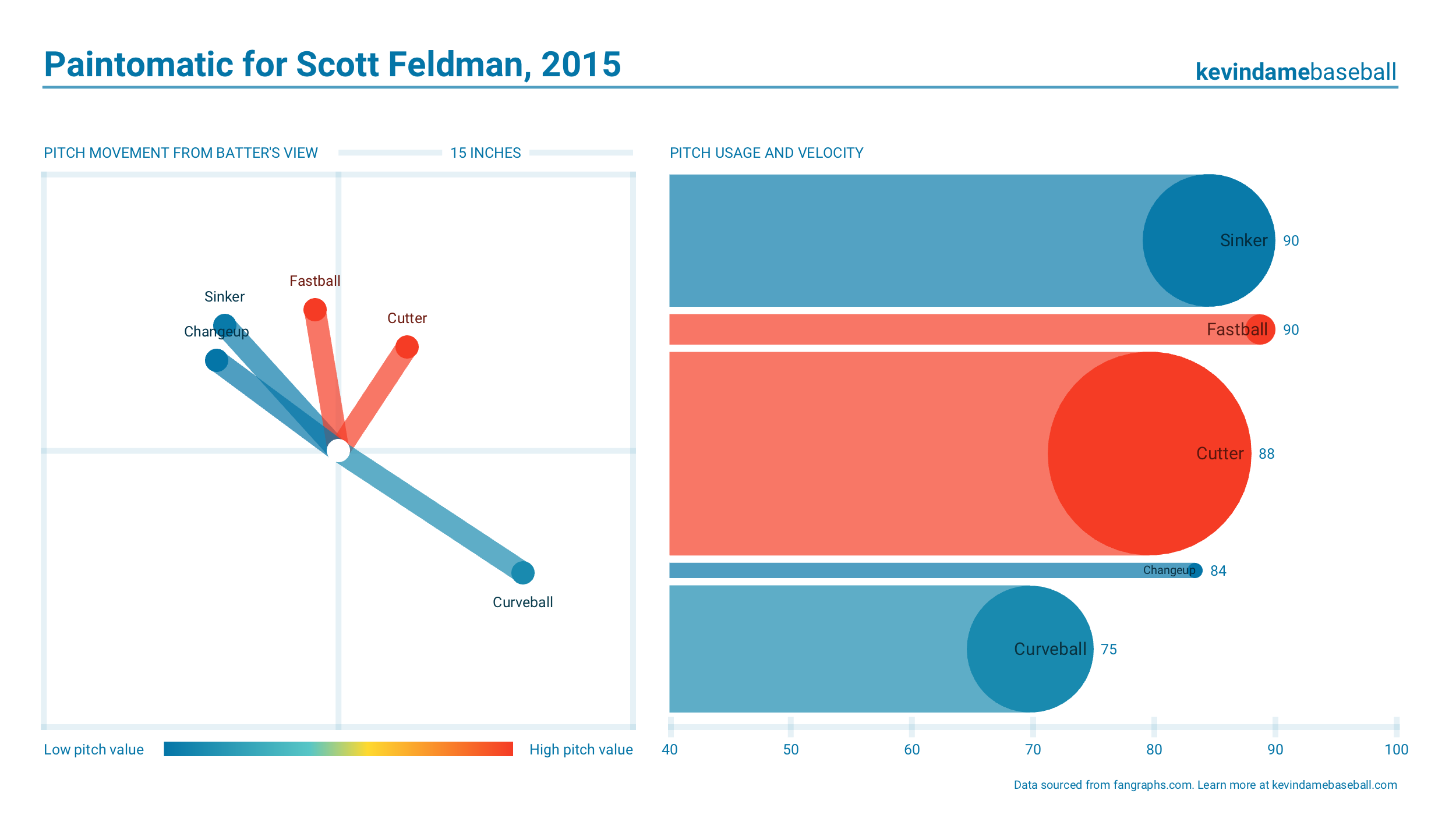 Scott Feldman, last season, was a pitcher of the extremes: he had two quality pitches, and three awful pitches. His fastball, and his cutter (which he uses a large proportion of the time), were extremely good last season; his bread and butter, if you like. But, unfortunately he wasn't quite able to dominate hitters Mariano Rivera style: his curveball, which he used a lot, was pretty awful. His seldomly used changeup was awful. His sinker which he used relatively often was awful. I feel as though I've been using the word awful way too much recently. I guess this Paintomatic is a fair reflection of Feldman as a pitcher: a solid back of rotation starter.

The Astros started the season with the following pitchers in the bullpen: Luke Gregerson, Ken Giles, Pat Neshek, Tony Sipp, Will Harris, Josh Fields, and Michael Feliz. With Paintomatics available online to whoever wishes to see them using the link at the top of the article, I'm just going to have a look at the key components of the bullpen: Giles, Gregerson, and Neshek. 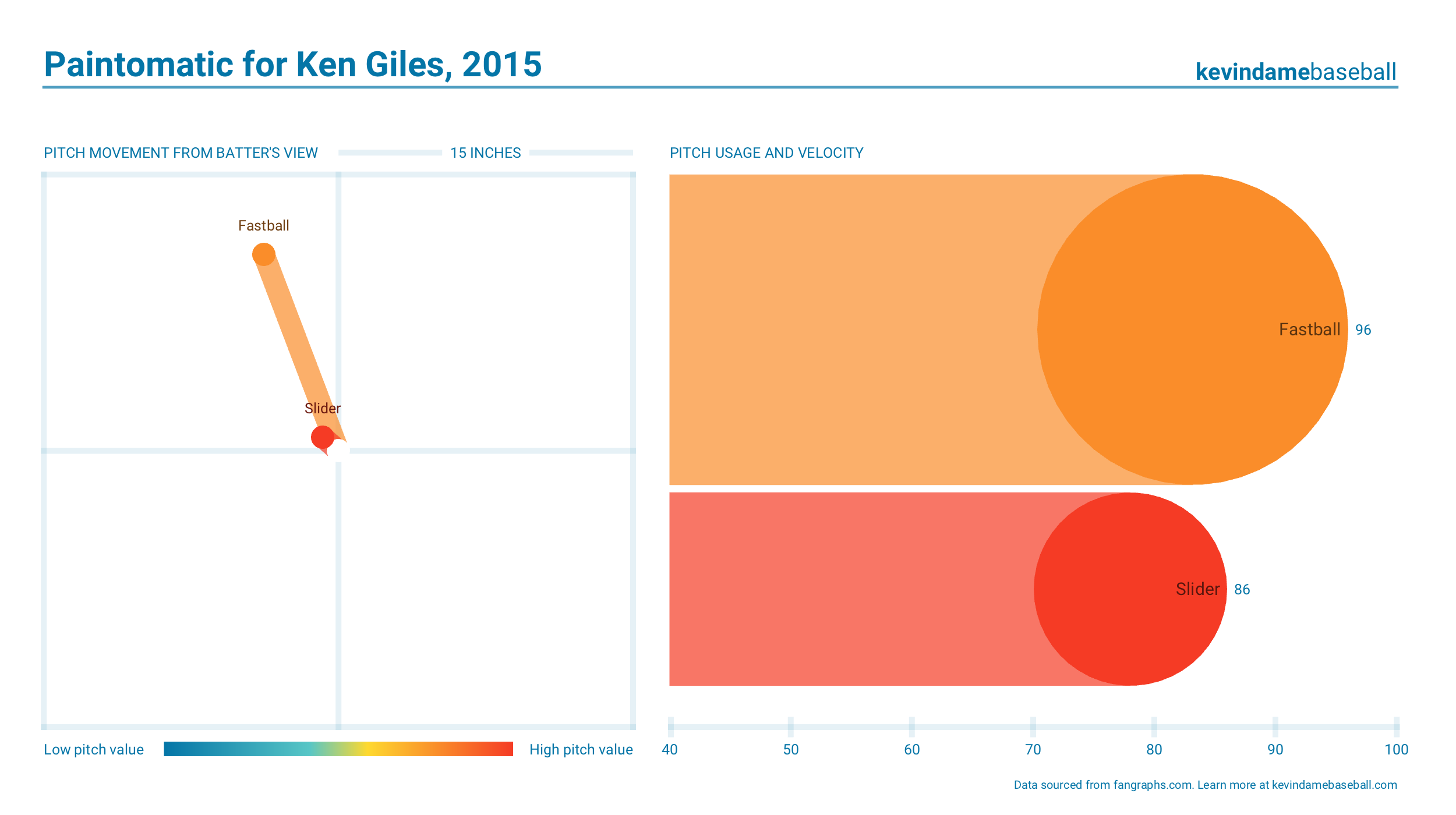 Ken Giles' Paintomatic is pretty simple: two dominant pitches. His slider, despite not having the most devastating of movements, is lethal. Averaging 86 on the gun, it is paired beautifully with a strong fastball that averages at 96. After both a strong rookie, and sophomore season we can expect big things in Giles' inaugural year in Houston. 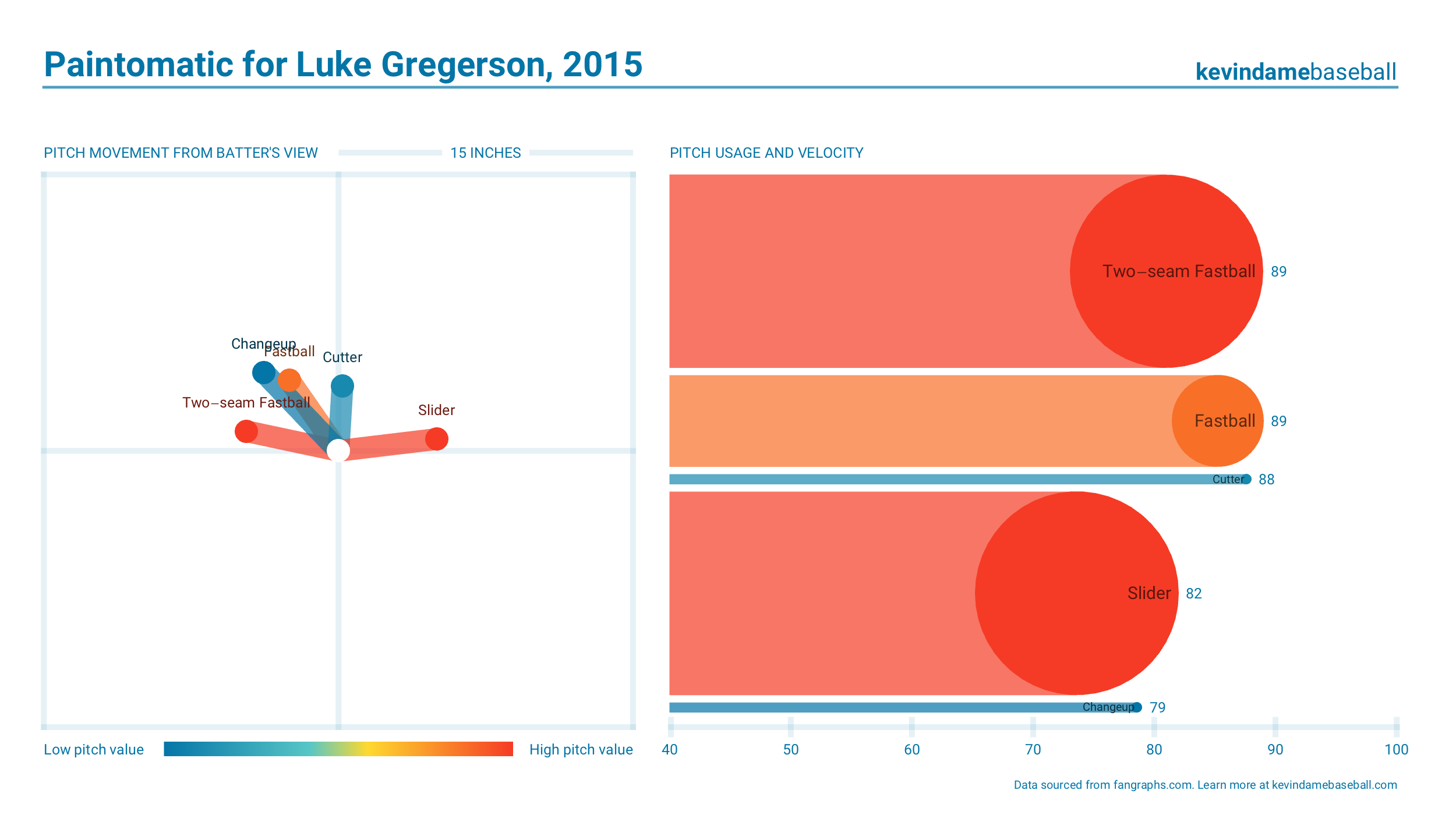 It's not hard to see why Gregerson is going to be the closer this season. I'll concede, his cutter, and his changeup aren't great pitches, but he doesn't use them, so who cares? On the other hand, his two-seam fastball (which averaged 89 miles per hour), and his slider were incredibly good. Adding on to the that, a pretty strong four-seam fastball. An impressive Paintomatic. 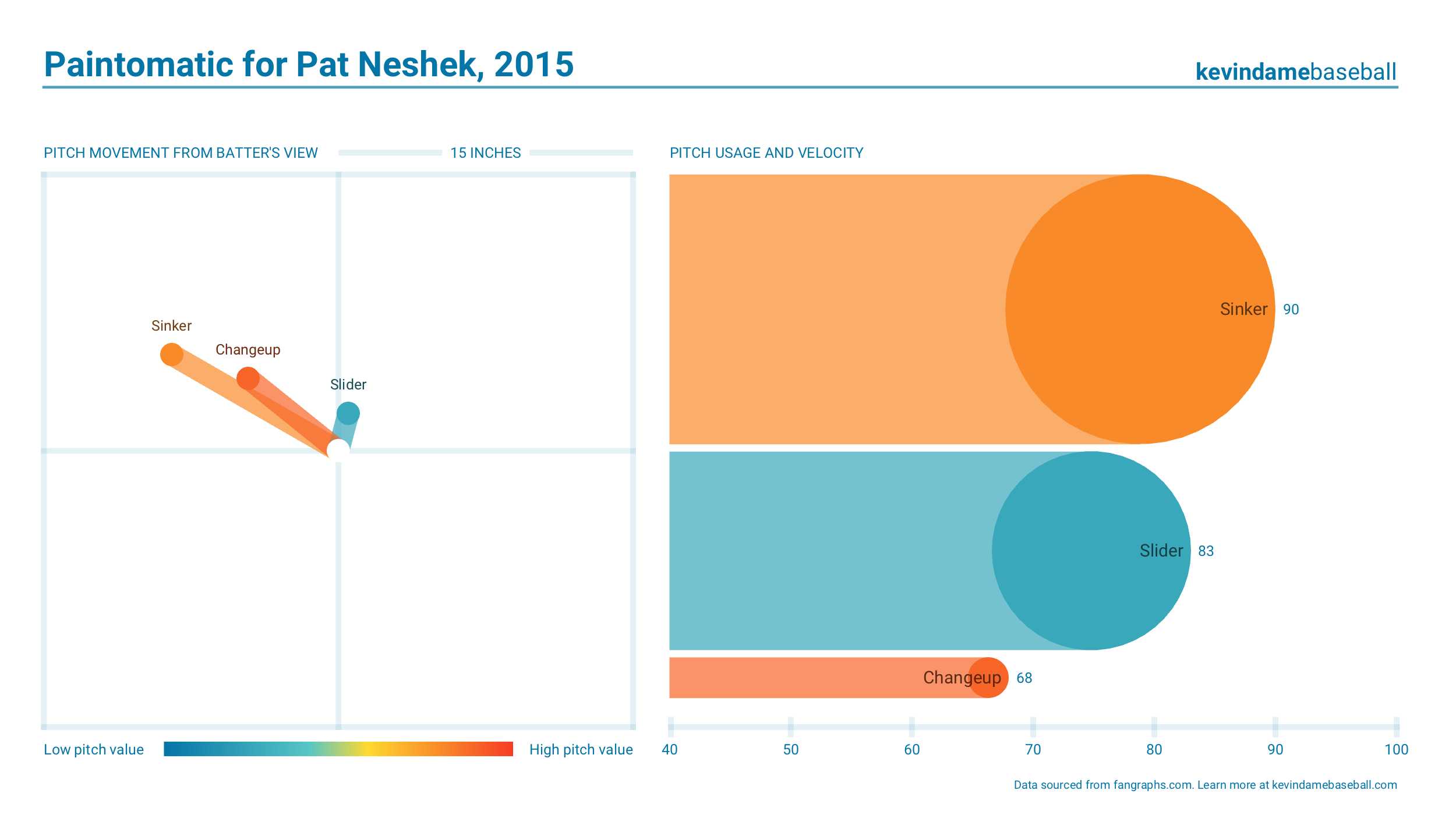 Pat Neshek is probably the quirkiest pitcher in the game of baseball, but his Paintomatic is pretty, well, normal. He has a nice sinker, with nice movement, which averages at 90 miles per hour. His changeup, which is seldomly used, is actually his best pitch -- note the incredible difference in velocities between his different pitches. And, last, and most definitely least, his slider was pretty poor last season, without a huge amount of movement.

So, there you have it: the Astros through Paintomatics. It's always interesting to have a different way of looking at statistics, and Kevin Dame has done some great work with his interesting visual. And, the best bit is: the Astros look really good; positive signs for the pitching staff for the year ahead.