MLB Opening Day 2016: A Preview Of The Houston Astros

'The Process' comes full circle for the Astros.

Share All sharing options for: MLB Opening Day 2016: A Preview Of The Houston Astros

‘The Process' has come to fruition for the Houston Astros.

The Astros moved from its long-time home in the National league Central to start a new chapter in the American League West in 2013. Along the way, Astros general manager Jeff Luhnow razed the team. He flipped any and all assets he had his hands on. It resulted in some loathsome baseball for a few years but it also created the team we see today -- a team on the doorstep of another head-turning season.

The Astros' game plan was to rebuild with the draft and create a winning culture that spilled over from the minor leagues to the majors. Since Jeff Luhnow took over in 2012, the Astros minor league system has had the highest winning percentage (.550) among all major league systems and Houston is tied with the Arizona Diamondbacks for most MILBtitles over that span (6).

So maybe it wasn't a surprise when that success reached the major league last season. The Astros overshot projections in 2015 and reached the postseason for the first time in 10 years.

Houston rode a 15-7 start almost all the way to an American League West division title but settled for an 86-76 season and a Wild Card berth. In the postseason, the Astros were six outs away from eliminating the eventual World Series champion Kansas City Royals in the American League Division Series.

Age is just a number

Two of the most prolific pieces for the Astros last season were Carlos Correa and Lance McCullers.

Correa was an all-world shortstop that led AL rookies in home runs (22), slugging (.512) and OPS (.857). Correa was only one of three rookies in MLB history to hit in the three-hole for their team in the playoffs -- joining Joe DiMaggio and Mickey Mantle.

The Astros relied heavily on these two young studs in 2015. The question is, "Is a sophomore slump looming?"

Was 2015 enough experience to not worry about the lack of extended major league experience for the youthful Astros?

‘The Process' is to draft and develop a team from within. The Houston haven't 100 percent followed that plan, the team has flipped young assets from the previous administration and drafted players by Luhnow's team into major league veterans.

Before the 2015 season, the Astros traded for Luis Valbuena, Evan Gattis, and Dan Straily. Valbuena and Gattis would be in the starting lineup for the majority of the season.

The Astros continued to fill holes in the roster with Major League-Ready players, trading for Carlos Gomez and Mike Fiersat the 2015 deadline.

During the offseason, Houston found the team's closer of the future with Ken Giles.

But this trade and other offseason transactions show the next phase of the ‘The Process'.

Starting with the current AL Cy Young winner is as good as it gets when building a rotation. Dallas Keuchel earned the award by finishing first in the American League in wins (20), innings pitched (232), batters faced (911), ERA+ (162), WHIP (1.02 WHIP) and groundball rate (61.7 percent). He was perfect 15-0 at Minute Park this season with a 1.46 ERA.Keuchel doesn't show any signs of slowing down as his game isn't based on velocity but the location and reading the batter's swing -- Keuchel has become a master at both.

Not be lost in the shuffle is Collin McHugh. McHugh has continued as Brent Strom's greatest success story, winning 19 games last season. McHugh has perfected effective velocity with his fastball and curveball.

Questions still remain around the rest of the Astros rotation, but the players that will fill the roles are known.

The team is currently playing it safe with Lance McCullers who has dealt with a sore shoulder during Spring Training. TheAstros have prepared for a situation like this with the actuation of Doug Fister.

Fister slots in the Astros rotation primed for a bounce back year following an injury-plagued final season with the Washington Nationals. He joins the back-end of the rotation with a returning pitchers Scott Feldman and Mike Fiers.

The Astros have five Major League ready starters at the moment. The team has six when McCullers returned.

When, not if the injury bug hits, Houston has more options with Dan Straily, Michael Feliz, and Asher Wojciechowski.

The Astros turned a weakness into a strength in 2015 with the bullpen. The key additions of Luke Gregerson and PatNeshek brought some veteran leadership to a very inexperienced position for the Astros. Resigning Tony Sipp give theAstros the answer they need against left-handed bats and Will Harris was the type surprise teams are looking for in a waiver pickup.

With the addition of Ken Giles is the final piece. No matter who is the closer, Gregerson or Giles, the Astros now have a veteran option and a flamethrower to get the final three outs in a game.

For the first time in a long time, the Houston Astros have long-term answers at the majority of the team's starting positions. The outfield is locked in with three centerfield-caliber outfielders at all three positions with Colby Rasmus in left, Carlos Gomez in the center, and George Springer in right. The team arguably has their best outfielder on the bench with Jake Marisnick waiting in the wings.

Carlos Correa and Jose Altuve make up one of the baseball's best double-play tandems. Luis Valbuena is solid at third base and carries a heavy stick at the plate. Jason Castro continues to evolve as a defensive catcher and is looking to find his All-Star spark at the plate.

The only questions remaining is who will be manning first base and the designated hitter position. Evan Gattis is dealing with a sports hernia surgery. The Astros have said time and again that Jon Singleton will get the first shot with Chris Carter gone.

Singleton will be in the field on Opening Day more than likely but will his possible replacement be in the lineup at DH if he struggles? Say Tyler White, A.J. Reed or Matt Duffy takes the job?

The backup catcher position shouldn't be overlooked with Max Stassi injured to start the season. The Astros haven't hinted a move yet but a veteran catching option will more than likely in the works after Spring Training roster cuts.

The actual batting lineup will look a lot like the one seen the playoffs: Altuve, Springer, Correa, Rasmus, Gomez, Preston Tucker, Valbuena, Singleton, and Castro. 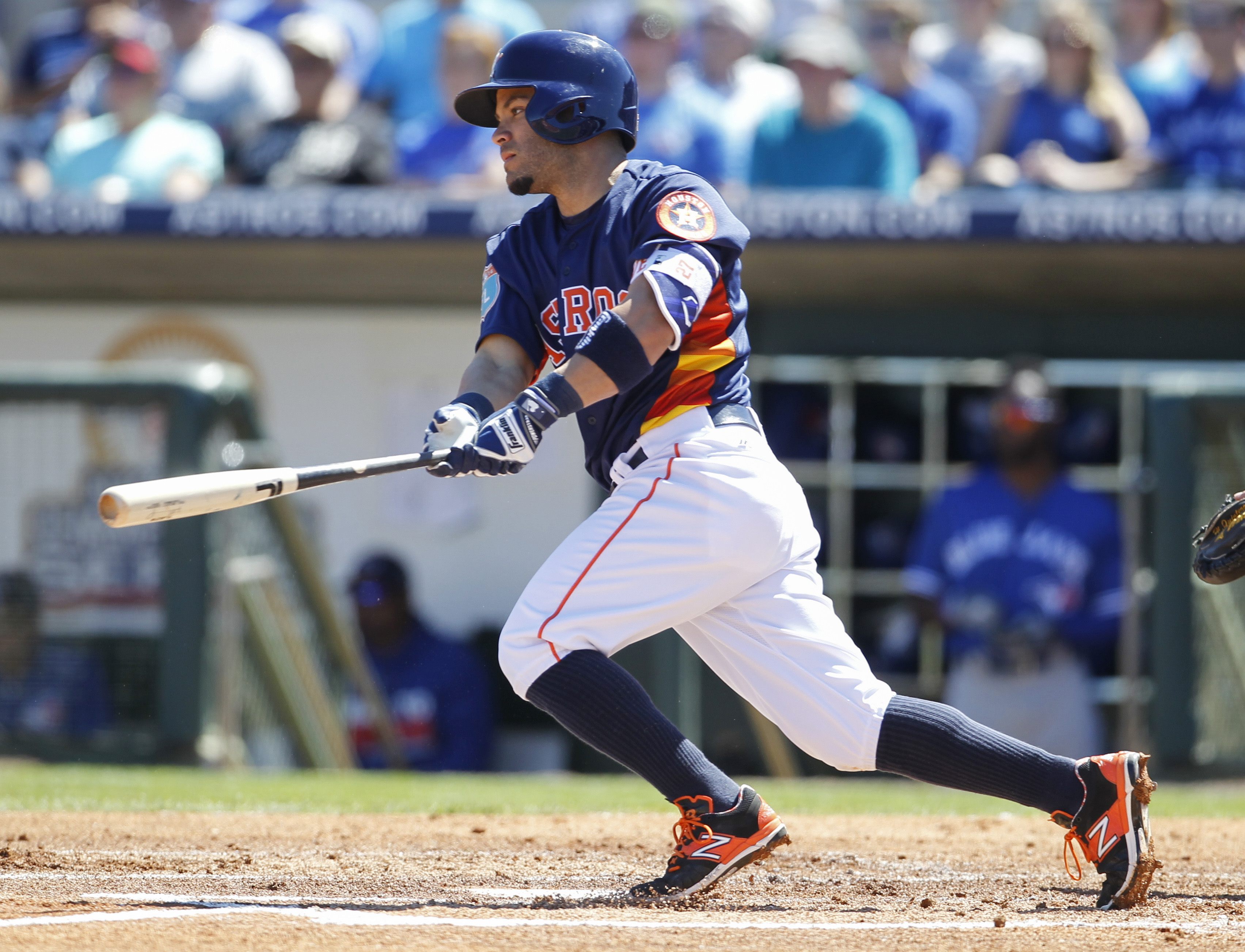 The Astros bench is comprised Jake Marisnick, Marwin Gonzalez, Preston Tucker, and Max Stassi's temporary replacement. The Astros bench has every option that the team needs: speed with Marisnick, Gonzalez can play multiple positions, and Tucker with a power bat.

The same question lingers for Houston, who will be the backup catcher? Will it be rookie Tyler Heineman or a late Spring Training pickup?

Who is left to breakout for the Astros? The team was full of breakout players in 2015. The answer will come at the first base position. I don't believe the Astros will sit pat if Jon Singleton struggles out of the gate. The breakout candidate will be Singleton or his replacement be Tyler White, Matt Duffy, or uber-prospect A.J. Reed.

MVP Candidate
Carlos Correa has the Rookie of the Year award under his belt. It's time to go for the MVP award. Correa hasn't slowed down this spring, batting .412 (14x34) with four home runs and eight RBIs. It's true we can't put any weight on Spring Training stats, but Correa is doing what he supposed to do with average pitching.

His value in the lineup and in the field is unmatched. If he keeps up his pace from 2015, the discussion will be Donaldson, Trout, and Correa for the top prize.

Doug Fister isn't a flashy pickup for the Astros. Fister was 5-7 with 4.19 ERA in 25 appearances (15 starts) with the Washington Nationals in 2015. If he can return to his 2013-14 from where he won 30 games, the Astros will have one of the deepest rotations in all of baseball. 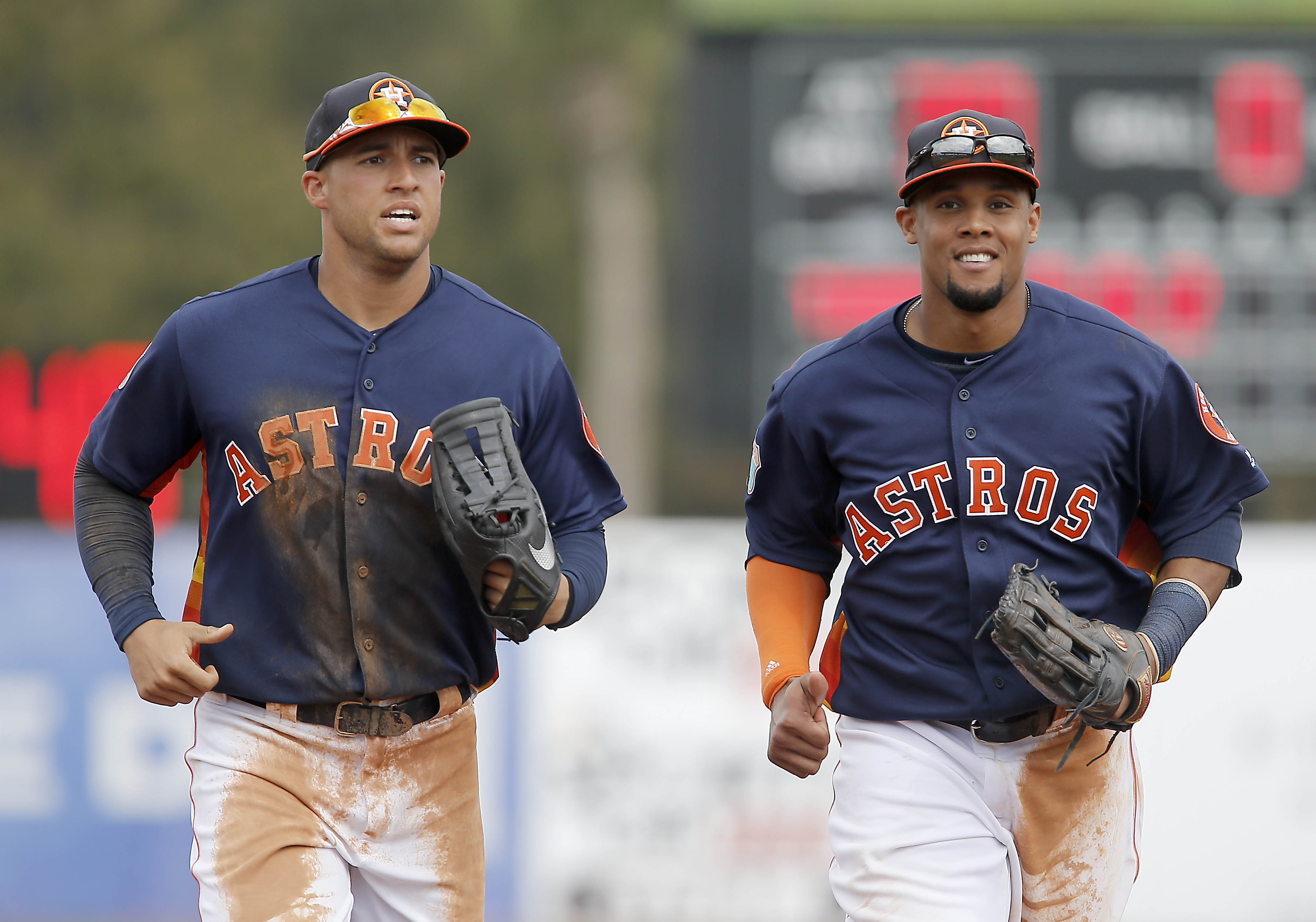 The Astros 2016 x-factor will be George Springer. But we know Spring is great? Right? But do we know what a full season of George Springer looks like? Springer has played in just 180 games since joining the Astros in the middle of the 2014 season. Springer has been talked about on the same level of Correa as the prospect and has shown signs of being a difference-making player. He batted .391 (18x46) in the team's final 10 regular season games after coming back from a broken hand.

It is a small sample size, but a healthy Springer will only help the Astros make bigger strides.

Impact From the Farm

The Astros prospect talks for 2016 starts and ends with A.J. Reed. Will the Astros bring up their top prospect at first base this season? Reed has hit at every level thus far, he'll more than likely need to prove it once again in Triple-A to start the season.

Another possible candidate to help the Astros is Colin Moran. The Astros have options at third but if Valbuena and Gonzalez get hurt, Moran could be the first one to get the call.

The Astros are already ahead of schedule, the team was supposed to get its first taste of winning in 2015. Instead, the Astros made the playoffs and won a wild card game. This time around, 90-plus wins and a division crown isn't out of the question with a full season of Carlos Correa in tow.