As a first step of what stands to be a prolonged transition of making the Fielding- and Ballpark-Independent Outcomes (FaBIO) evaluation system applicable to assessing offensive performance I have modified the same files used to process pitcher data for speed and baserunning analyses. Below I will present how most Astros minor league position players of 2015 and/or now rated in terms of these somewhat fielding- and ballpark-independent offensive speed/baserunning analytics.

The first course of action is to filter out the specific events on which a given player's offensive speed and baserunning ability is most likely to show up in game action. There are three general groups of events to review per player: 1. the most relevant of their own plate appearances (esp. infield groundballs and outfield basehits), 2. nonbatted ball sequences while others are at the plate on which the base ahead of them is open for an advance, and 3. batted balls hit by others on which they as a baserunner are capable of taking an extra base or are at risk for being doubled off the bag (select types of outfield basehits, outfield airouts, and infield lineouts).

As such, included in this analysis is every 2015 MiLB plate appearance involving the player for which at least one of the following was true (use CTL + and CTL - to zoom in and out if you insist on reading the fine print):

In each instance, the specific amount of nonzero runs credited or docked is determined based on how the inning’s run expectancy per league standards would theoretically rise or fall in line with how the outs and base occupation state changed as a result of or in the absence of the event. In 7 of the 10 scenarios, that value of runs is amplified slightly based on the relative frequency of attempts at that per opportunity in the corresponding ballpark (rewarding the successful advancer more at venues where that advance attempt is rarer by league standards and less so where it is more common).

The player’s overall Offensive Speed Rating for the season will be expressed on both a percentile basis (that reflects the expected percentage of league peers beaten on the statistic, where 50 is average, 84 is plus, 97 is plus plus, 16 is minus, 3 is minus minus, …) and on a scout scale (where 50 is average, each 10 points up or down is one standard deviation, with 60 plus, 70 plus plus, 40 minus, 30 minus minus, … with the rating rounded to the nearest value that ends with a 0 or 5) for reasons that will become clearer later.

Results: 2015 MiLB Season
.
Full-Season Players
.
AAA level indicates Fresno (and some Colorado Springs for two players) of the Pacific Coast League, AA indicates Corpus Christi of the Texas League (a bit of Biloxi of the Southern League, in one case), A+ indicates Lancaster (and a stint with Stockton, for one) of the California League, while A indicates Quad Cities of the Midwest League. 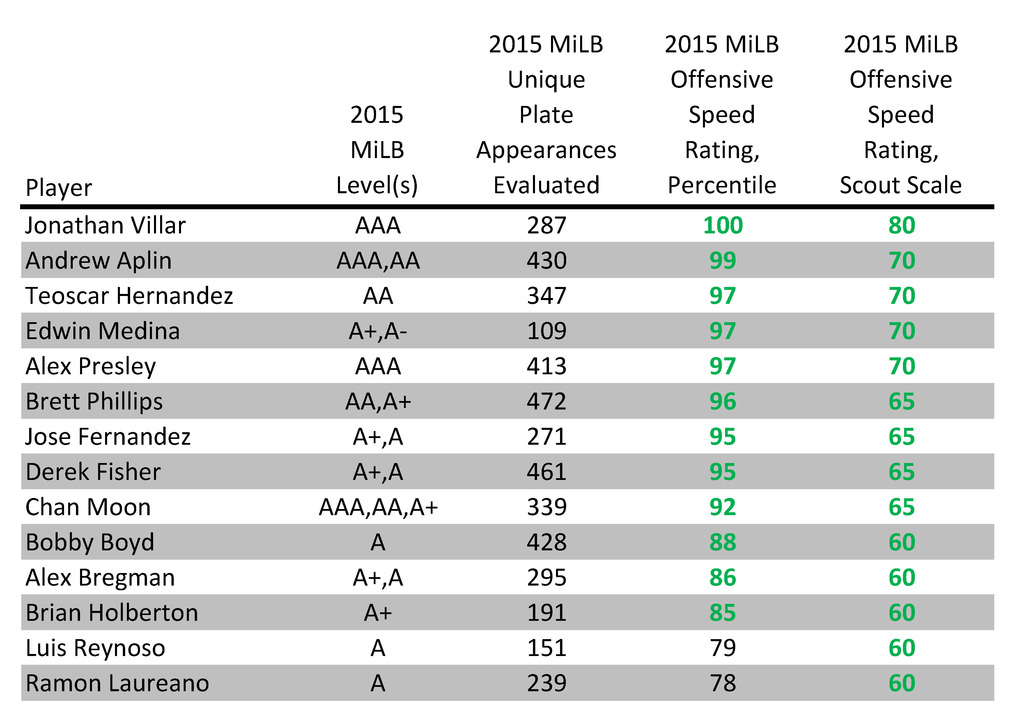 This collection of full-seasoners who earned a near plus of better Offensive Speed Rating naturally features organizational hares and better running athletes. Occasionally a leftfielder rather than a catcher Brian Holberton would stand to be the most surprising player to make the table.
. 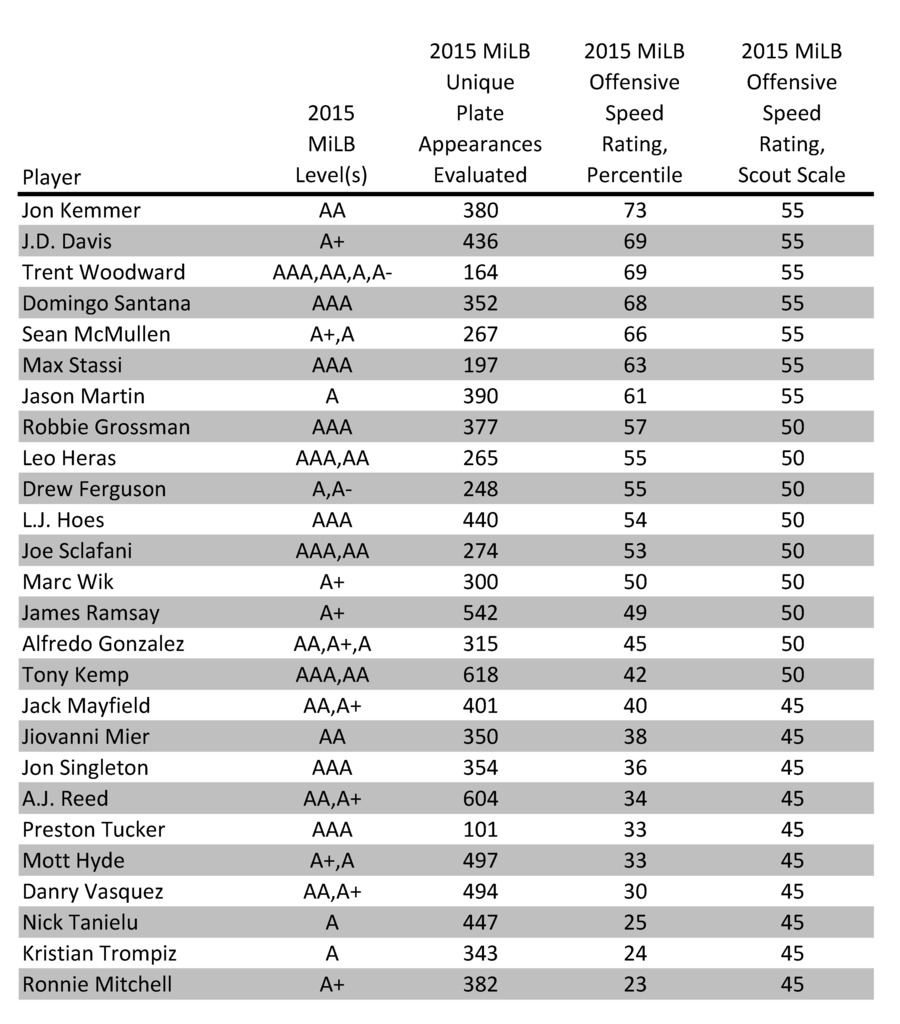 This larger ensemble represents a more middle of the road baserunning crowd, with ratings ranging from half plus (55 scout scale) to half minus (45 scout scale). A rather high handful of outs made advancing on his own singles or doubles may be all that denied emerging corner outfield prospect Jon Kemmer a full plus rating. For A.J. Reed to rate as well as half minus prospectively on comparable MLB speed and baserunning metrics would be a favorable outcome given the combination of his physique and how frequently he projects to reach base.
. 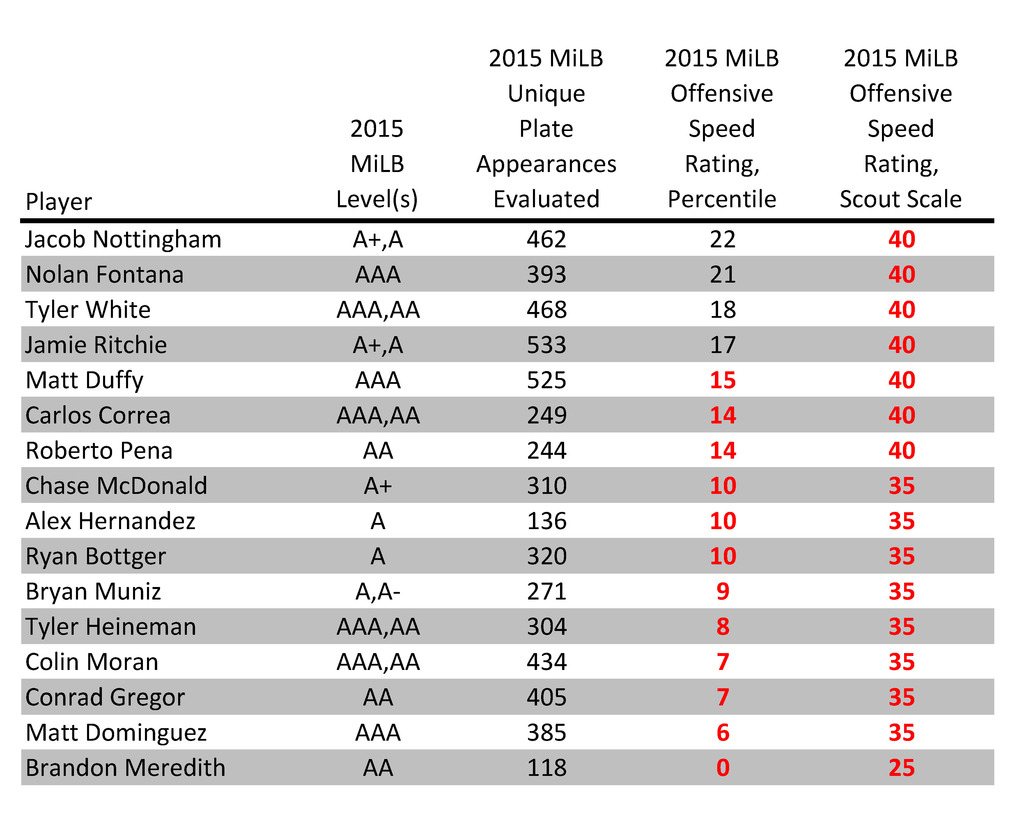 And this collection who rated minus or worse stands to include the more leadfooted runners of the full season squads. With walking seemingly Nolan Fontana's lone plate skill one would prefer that he run the bases more swiftly and deftly after reaching in that fashion. Carlos Correa makes a surprising appearance here as his baserunning/speed seems to have graded out positively and in the neighborhood of half plus during the MLB portion of his 2015. More extra base hits off Colin Moran's capable bat would lessen the difficulty associated with trying to plate him after he reaches via a hit.
.
Short-Season Players
.
A- level indicates Tri-City of New York-Penn League, R+ indicates Greeneville of the Appalachian League, R indicates Gulf Coast League (GCL), while R- indicates Dominican Summer League (DSL). 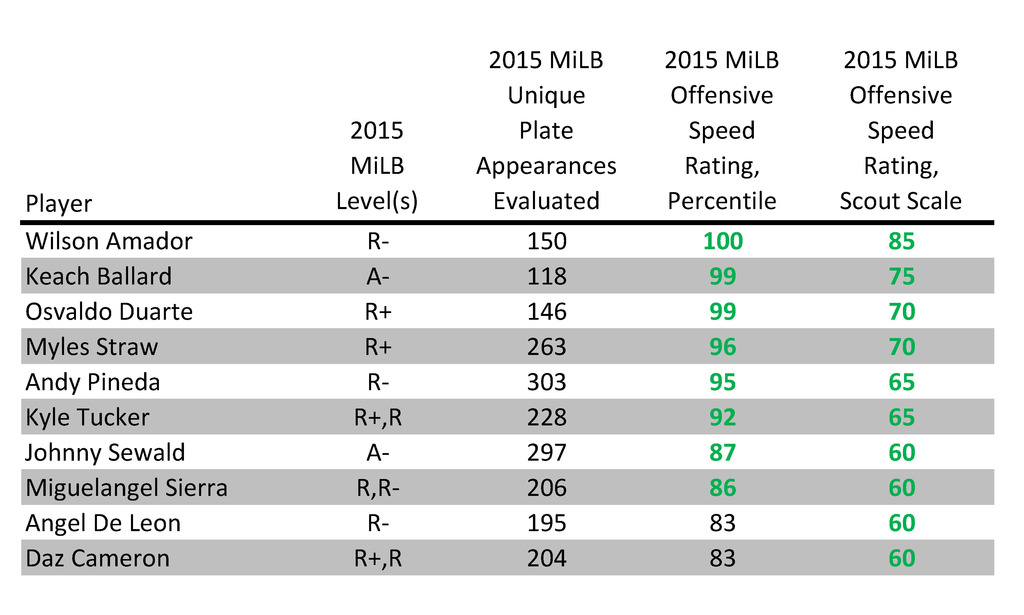 Osvaldo Duarte has been assigned the top speed grade in the organization by MLB.com in the past. Greeneville teammate and 2015 junior college draftee Myles Straw raised eyebrows with his wheels in a private workout before the 2015 draft. The rating of Kyle Tucker is impressive and gives hope that he may also run the bases like Ted Williams.
. 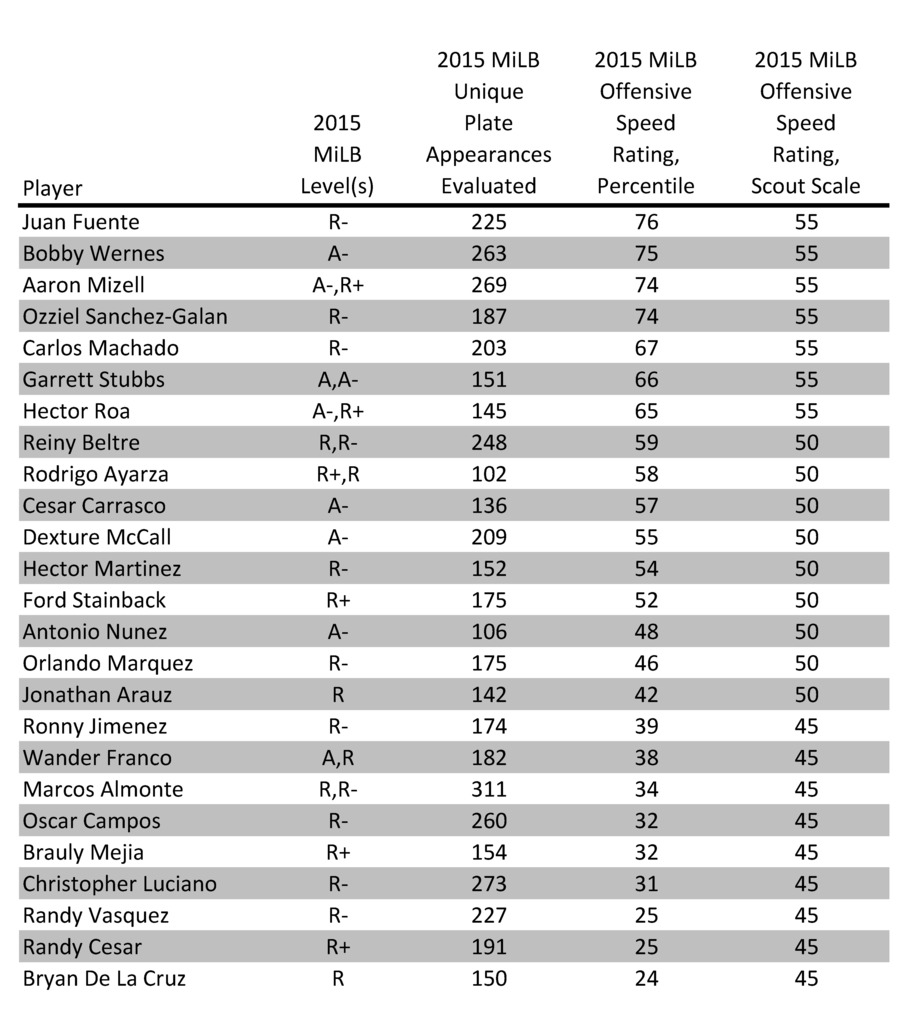 Organizational newcomer Jonathan Arauz rated just under league average as a member of the GCL Phillies.
. 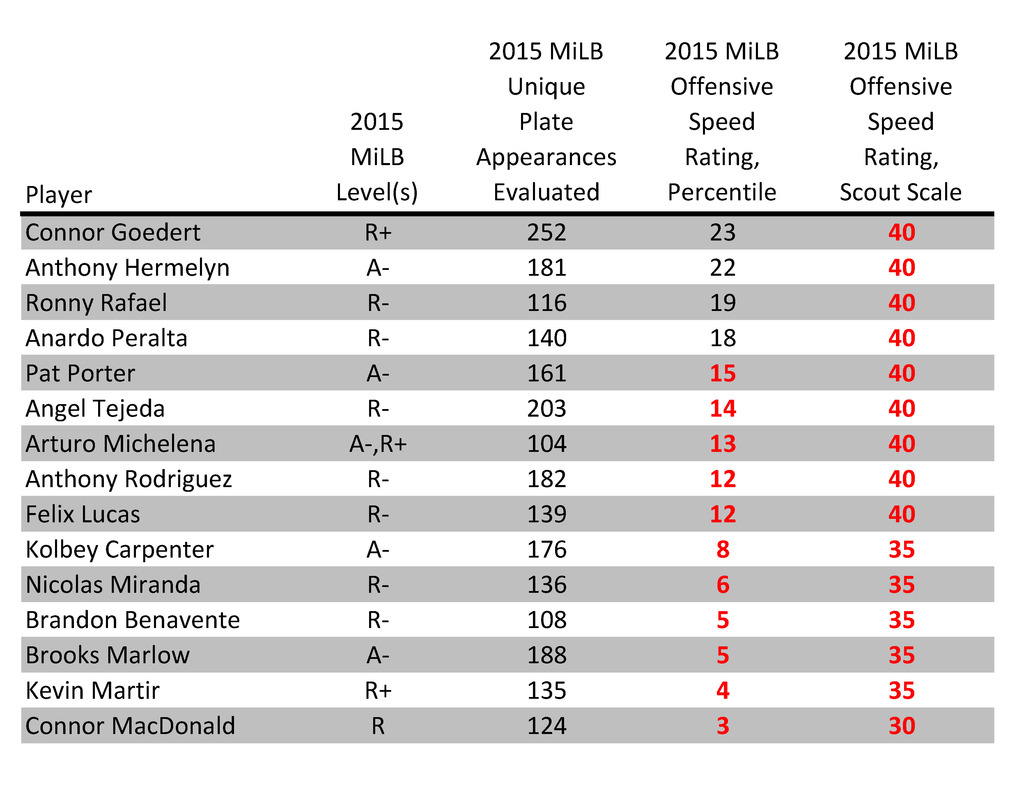 Running was thought to be a positive tool of DSL debutant Ronny Rafael as a top 2014 international free agent and as such his future rating should rise as his sample of professional data increases.
.
Context: 2015 MiLB Results Versus Actual Scouting Grades
In this subset of still-a-prospects the Offensive Speed Scout Scale Rating computed here is compared with the "Run" Scouting Grade placed on the player by MLB.com's prospecting team at some point during the past couple of seasons (which is also expressed on the 20 to 80 scale with 50 average and 10 points amounting to 1 standard deviation). Which players would you expect to have the biggest discrepancies between the Scout Scale Rating and the much more generic MLB.com Run Scouting Grade? 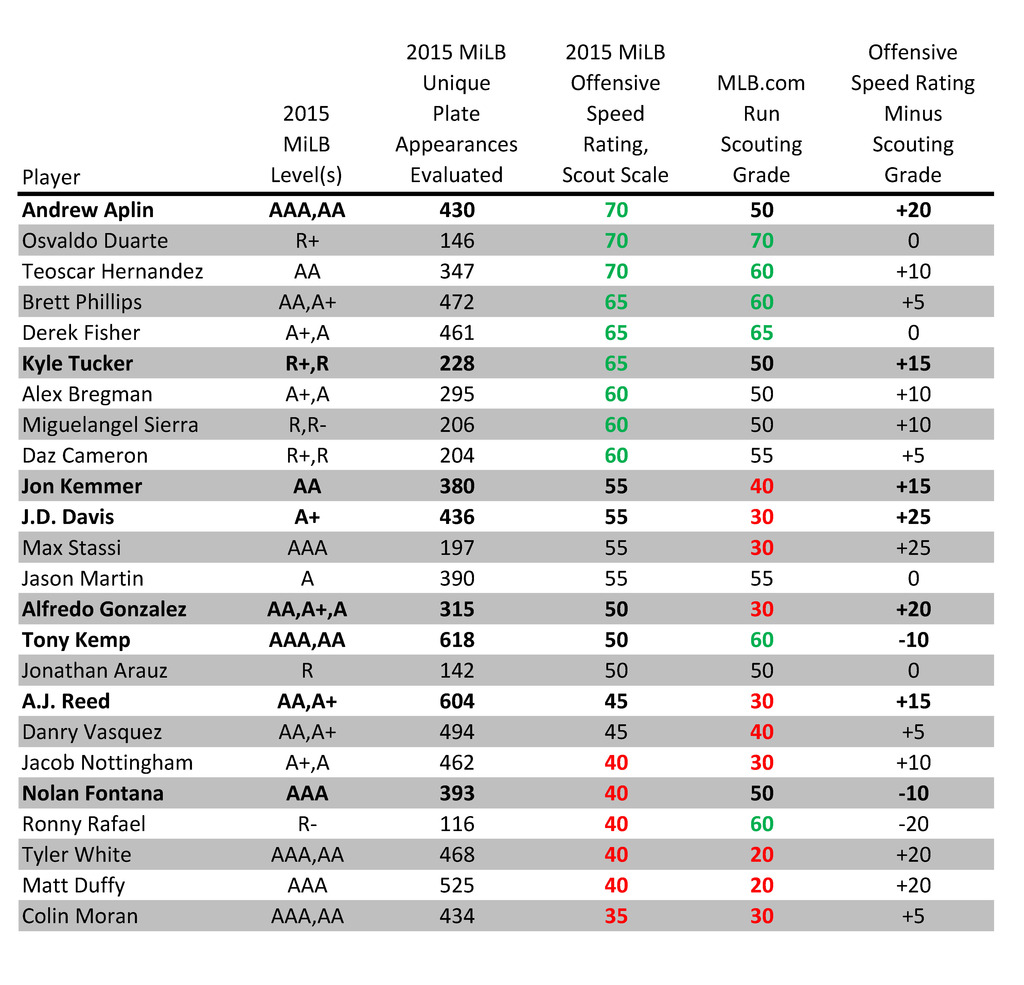 The largest exceeders of their MLB.com Run Grade were J.D. Davis, Max Stassi, Andrew Aplin, Alfredo Gonzalez, Tyler White, Matt Duffy, Jon Kemmer, Kyle Tucker, and A.J. Reed. The largest trailers of their MLB.com Run Grade were Ronny Rafael, Nolan Fontana, and Tony Kemp. The prevailing theme of the Offensive Speed Rating exceeding the Run Grade would likely be true for many an organization assessed in this manner as the MLB.com writeups tend to assume future slowdowns with aging (especially for the youngest prospects) and harshly grade catchers and corner infielders.
.
Exit Poll
Note that the data rows of the poll options are in bold text in the table not quite immediately above.

Which player's 2015 MiLB Offensive Speed Rating surprised you the most in either direction?