I have been an avid reader, but very seldom poster, on this site for over 5 years. I love all of the content, perspective, and insight that this site provides and I definitely wanted to begin by showing my appreciation for all of the great writers and posters that frequent this community.

At some point before this last year's draft I was thinking about how the production from the 2012 draft class could be historic. I did some light research and I came across the total war by player drafted pages over at b-ref. I began sifting through the different draft classes and I decided that a breakdown of how our organization has produced over the last 15-20 years would make an interesting fan post. I never really got around to doing it, but, as I have some extra time on my hands today, I decided to go ahead and write it up (despite the fact that this post would be much more relevant and interesting during draft season). Regardless, here is my breakdown of the Astros draft performance over the course of 1995 to 2012.

To start, here is a bar graph of career WAR (so far) by year for all of the Astros drafts followed by an analysis of each of the general manager's performance. 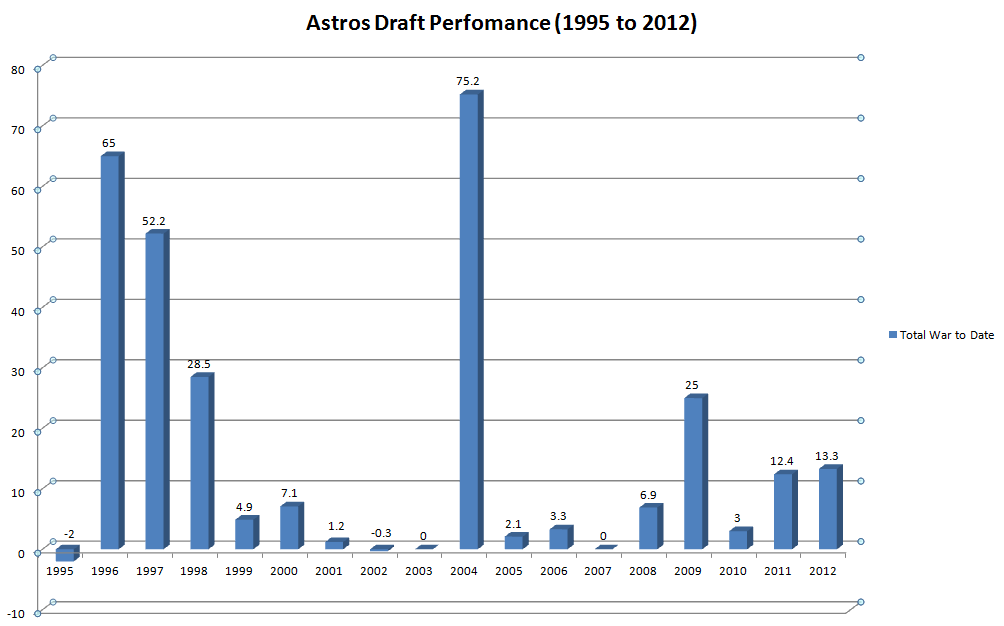 Gerry Hunsicker Total War = 233.8
Average War per Draft = 29
2005 to 2007: Tim Purpura
Tim Purpura Total War = 5.4
Average per Draft = 1.8
2008 to 2011: Ed Wade
Ed Wade Total War = 47.3
Average per draft = 11.8*
*It is obvious, at this point, that Hunsicker has a huge advantage in these metrics as most of the players that he drafted have played the majority, if not all, of their careers (yielding much greater career Wars), but I was actually surprised with the quality of Ed Wade's drafts. I expect him to eventually outpace Hunsicker in average war per draft as these younger players continue to do well in the majors.

So, after doing this exercise, a few things stood out to me: 1) Tim Purpura did a horrendous job of utilizing the draft to inject talent into the organization. 2) Ed Wade performed much better than I think many people give him credit for, and 3) While I am very bullish on Luhnow's performance, it is still very early to analyze how well he has done.

What do you think? Any surprises? Is Luhnow going to be the best drafting GM of all time? Is Ed Wade going to top him on average war per draft? Is Purpura the worst thing to ever happen to the Astros?