Tweaking my Fielding and Ballpark-Independent Outcomes (FaBIO) evaluation system for application to offensive players has created a need to quantify parameters that were not necessary in pitcher analyses, namely the speed and power of individual batters. Below you will see how early attempts at quantifying position player speed on the offensive side of the ball are progressing, and what those results say about current and recent Astros.

The present need to for this arises as the runs value associated with a groundball increases (gets more positive) as the batter's speed increases. Without the benefit of a handy max-effort 40 yard dash (or better yet a 90 feet one) spring training time on every position player, one has to generate methods from in-game speed-sensitive data to stratify players based on that parameter.

Rating One: Stolen Bases per Opportunity

This formula is stolen bases minus non-picked off caught stealings, divided by the number of stolen base opportunities (times the player was stationed on first or second with the next base unoccupied). The players of a league who meet the minimum plate appearances threshold for the study group are ultimately percentile ranked from highest percentage to lowest on a 100 to 0 scale. Besides simply speed the result involves both the quality of the jump the player gets as well as player/manager/coach aggression.

Rating Two: Extra Bases Taken on Other Batter's Singles and Doubles per Opportunity

This is the number of times the player successfully went first to third or second to home on a single or first to home on a double, divided by the number of opportunities to do so. Leads and coach/player aggression also factor in here, as do field factors such as outfield fence proximities. These advance opportunities present much more seldom than the former type do. The league qualifiers are ultimately percentile ranked from highest percentage to lowest on a 100 to 0 scale, with 97 being plus plus, 84 being plus, 50 league average, 16 minus, and 3 minus minus.

An Overall Offensive Speed Rating can be generated by weight-averaging the 3 prior ratings based on the player's relative frequency of each opportunity type. This, too, will be expressed on the 100 to 0 scale.

The following numbers express how 2015 Astros fared relative to the standards of their league(s). 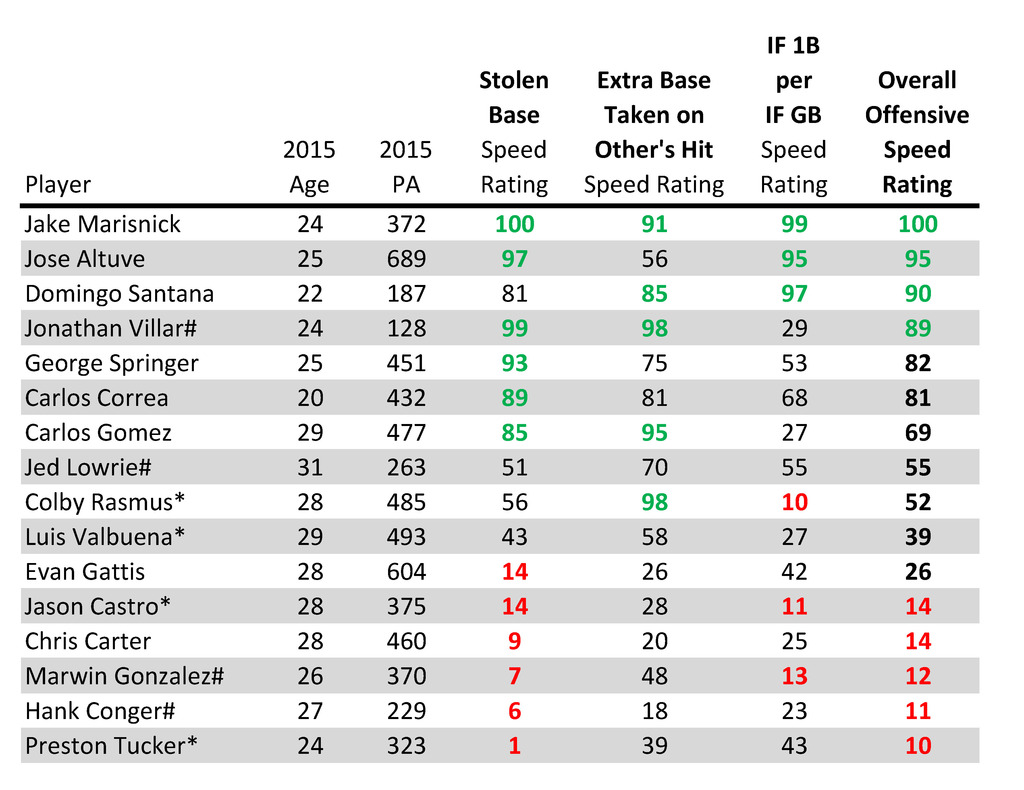 Combined 2015 and 2014 Seasons: Recent Houston Astros and Other MLBers of Interest

Going back another MLB season to 2014 and combining the results of the two seasons yields the following results, with select non-Astros included as data frames of reference. 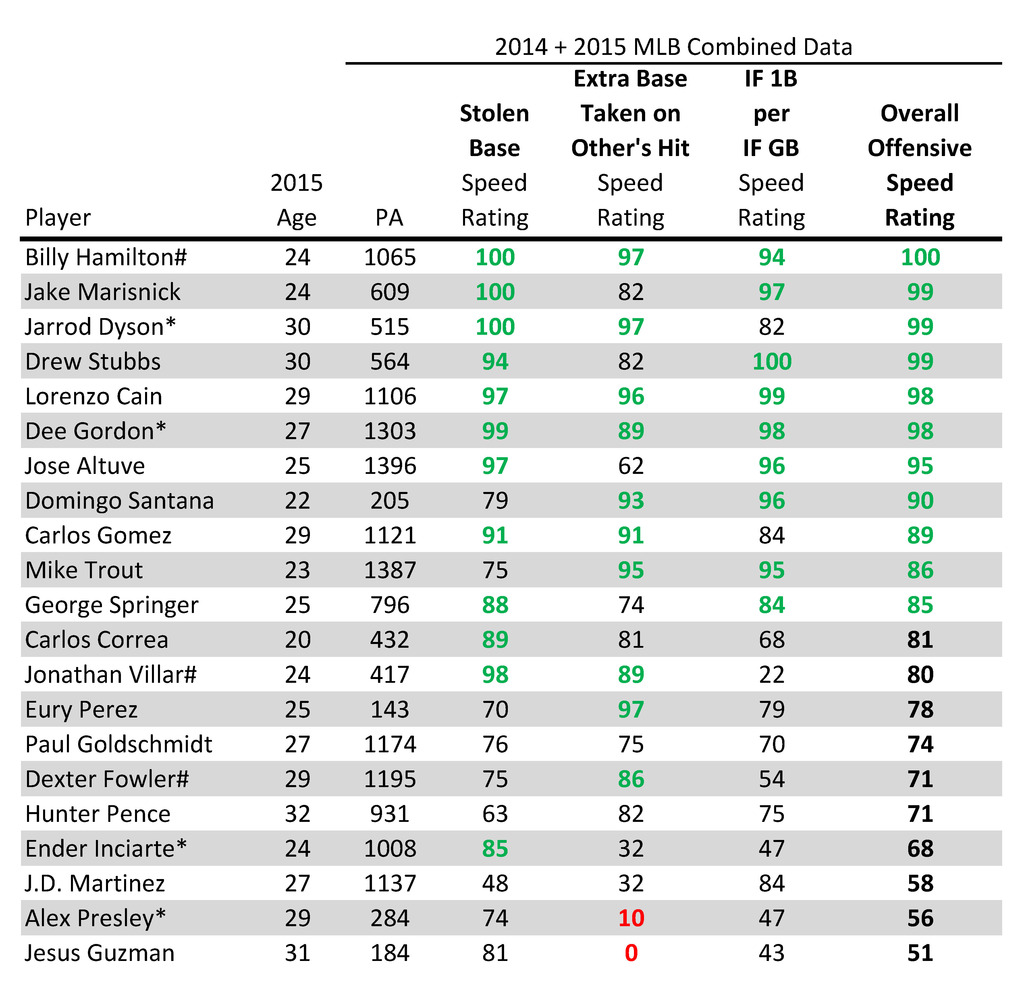 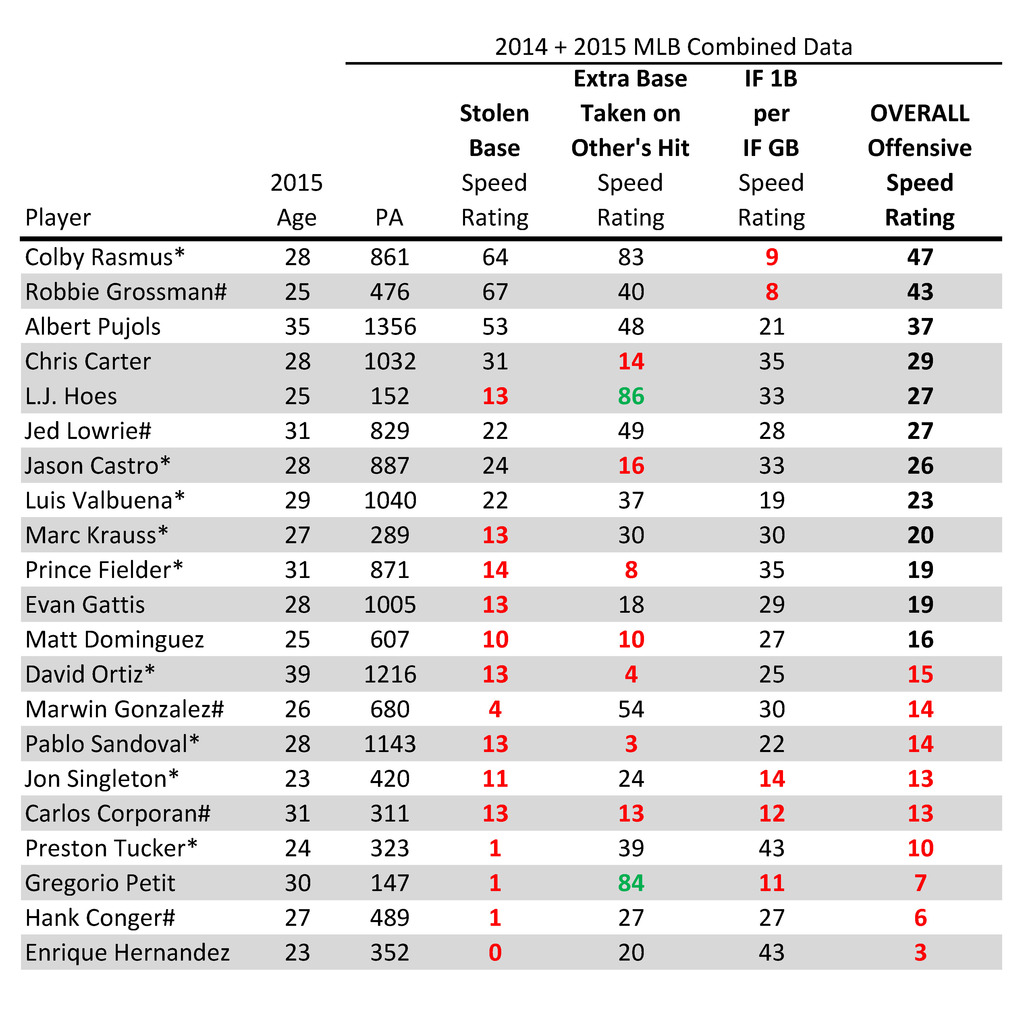 Which of these players' 2015 Overall Offensive Speed Rating did you find the most surprising in either the positive or negative direction?