Bo Porter fired: Who are the Astros managerial candidates?

Who's been thrown around already as a possible managerial candidate?

Share All sharing options for: Bo Porter fired: Who are the Astros managerial candidates?

As you might have heard, the Astros are in the market for a new manager, having fired Bo Porter less than two years after they hired him.

Currently, Tom Lawless is undefeated as interim manager and, until he loses a game, probably has a lock on the job. But, assuming Lawless doesn't pull off a 20-3 run to finish the season, it's likely that the Astros will hire a new man to helm the big league ship next season.

Who are those candidates? We know that Jeff Luhnow said some of the finalists for the job two years ago will be in play again and that he's been getting non-stop calls from around the league.

Let's run down the names and give you a quick snapshot of each man's qualifications. 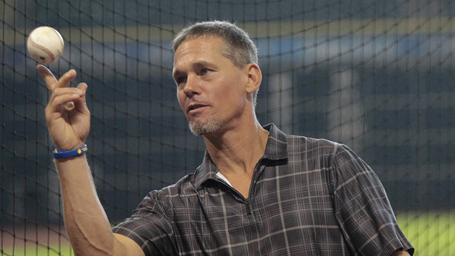 This has been the most popular name brought up in recent days. Biggio has been a fixture around the Astros in recent sesaons. He's been seen talking frequently to Jeff Luhnow and the Astros GM has praised Biggio in interviews over the past few years.

But, as Hardball Talk points out, hiring Biggio doesn't make a ton of sense. While some managers have been hired for high-profile gigs with little to no managerial experience, it may not work for the Astros to do this. You know, since they just fired a guy with little experience.

What's also interesting is that Jim Crane said that Reid Ryan, Nolan Ryan and Biggio will all be involved with the interview process. If Biggio ends up as a candidate, it'd be like the person in charge of vetting vice presidential candidates recommending themself. That's not a bad thing, mind you. 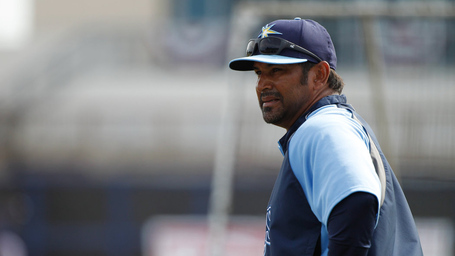 If I had to handicap the field, Martinez would be the prohibitive favorite. He was one of the few finalists last time around that got named and admitted he'd interviewed. He comes from an organization that possesses the "synergy" between the front office and the manager's office Houston appears to want. He likely has seen how to implement reams of data into action.

Oh, and he apparently would be receptive to another interview, while acknowledging that he's already got a pretty good job.

"My job is to be the bench coach with the Rays and help this team succeed," said Martinez, who has also previously interviewed for manager jobs with the Cubs, Indians and Blue Jays. "If another opportunity arises, I'd welcome the opportunity. (The Astros) are good people over there. I've interviewed with them before. If they do call me, I'd be looking forward to it."

With all the talk about how awful the Astros management is, a baseball guy like Martinez mentioning that they're "good people" could be a good sign for him getting the job. Maybe all those leaks about working in the Astros salt mines would finally stop. 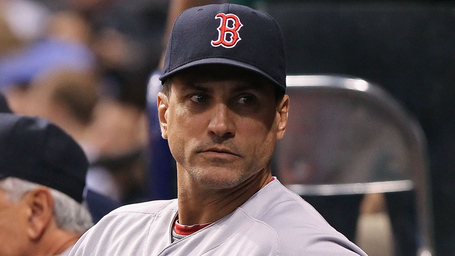 One of my favorite former Astros, Bogar had a good shot at the job last time around. Reportedly, Bogar interviewed for the job last time around. He's one of the few candidates actually acknowledged as part of the search, as Jeff Luhnow kept a tight lid on his finalists in 2012, much moreso than Ed Wade did when he hired Brad Mills and each candidate got his own press conference after the interview.

Bogar may not be a managerial veteran, but he's certainly a veteran of the interview process. His name has been linked to most of the prominent openings for the past few years and there was even a time when it seemed like he might take over in Boston after the Bobby Valentine mess imploded.

The former shortstop also has plenty of managerial experience in the minors and has worked with forward-thinking front offices, both in Boston and in Texas.

In addition to Bogar, the Astros have also been linked to Texas pitching coach Mike Maddux and Rangers minor league manager Steve Buechele. 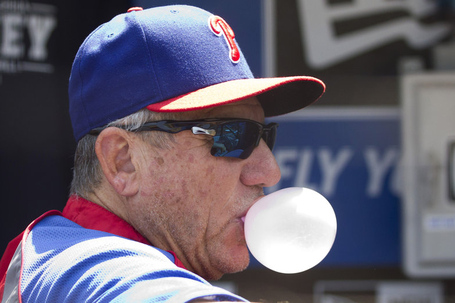 This one doesn't seem to make a ton of sense, does it? Bowa is one of the most notoriously fiery managers in MLB history. He was a hard-nosed player and a hard-nosed manager, but the Phillies took off when Bowa was replaced by Uncle Charlie Manuel.

Bowa hasn't been mentioned by anyone as a candidate and, at 68, would be one of the oldest men on this list. But, he did interview last time around. Maybe that was just a favor for a friend or maybe it was Luhnow trying to collect some baseball knowledge from a lifer like Bowa. 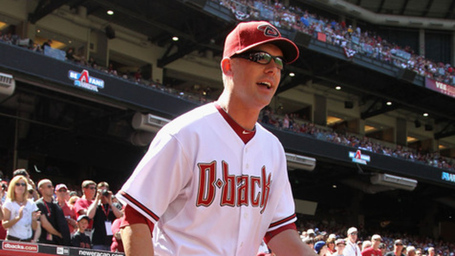 One of the youngest candidates on this list, the 40-year-old Hinch has a pretty varied background. He's been a manager in Arizona and has worked on the scouting side as well. He worked with Josh Byrnes, an analytics-driven front office type and probably has some familiarity with the kind of information Luhnow's Nerd Cave team will likely flow to the position.

Hinch didn't interview last time around, but did "draw interest," according to Evan Drellich. He's currently unaffiliated with an organization, which is a nice way of saying he's unemployed since the shakeup in San Diego. 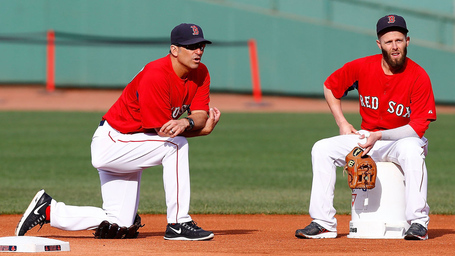 Here's a name that has heated up in managerial races since last season. Of course, helping a team win the World Series last season will do that. But, managerial interviews are nothing new for Lovullo. After a successful run as a minor league manager with the Indians, he interviewed for the Los Angeles Dodgers opening before the 2006 season.

Lovullo also interviewed for the Pirates job after the 2007 season, but spent the next few seasons as a Triple-A manager for the Indians, before the Red Sox stole him away to be their Triple-A manager in 2010. In 2011, John Farrell took Lovullo to Torotono, where Lovullo served as first base coach for two seasons.

When Farrell took over in Boston last year, Lovullo joined him as bench coach, where he's been for the past two seasons.

Growing up in the Indians, Blue Jays and Boston systems, Lovullo probably has a healthy respect for analytics and knows from the last two seasons on how the Red Sox integrate analytics into coaching decisions. Unlike Bogar, Bowa, Biggio, Martinez and Hinch, Lovullo only had one seasons where he received significant at-bats in the major leagues. But, he did hang around for eight seasons.

Listen to what Adam Everett and Tom Lawless talked about before Tuesday's game, about how their experience in a big league clubhouse could help ease the transition for players. Bo Porter only played three season and 86 games in the majors. Could the Astros be looking for someone with more big league time to know how major league players respond to things? 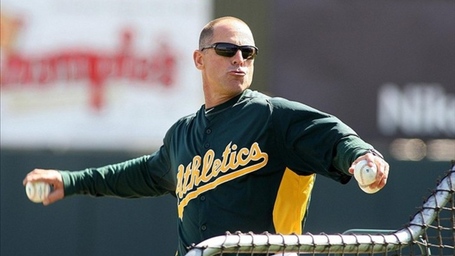 Another name that Drellich brought up, who hasn't been linked to the Astros before now. Hale makes sense, though. He's the bench coach for one of the best teams in baseball over the last two seasons (an August swoon notwithstanding). He's in an organization that "the Astros would like to emulate" as Drellich says Oh, and the A's are also at the forefront of using analytics in lineup construction, using platoons and other innovative things the Astros would like to employ.

Hale has as much playing experience in the majors as Lovullo or Hinch, while his minor league managing experience falls below Lovullo and Bogar. He, like many of the candidates on this list, has really no managerial experience in MLB.

The side benefit is that this could weaken the A's, hurting a division rival. But, how much value does a bench coach provide, aside from leaking damaging things about the organization to the press? 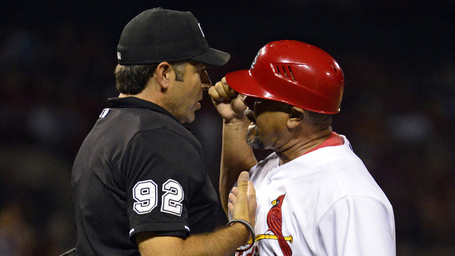 Ah, the Cardinals connection. Oquendo comes from one of the most successful franchises in baseball and the one Houston wants to emulate more than any other. He knows about the kind of analytics-based approach Luhnow imported from St. Louis and would be familiar with guys like Brent Strom and some of Houston's other coaching holdovers.

Oquendo has also been a popular managerial interview over the past few seasons and was considered a favorite to take over for Tony La Russa, before Mike Matheny got the job. He's got major league playing experience, but little managerial experience.

Well, wouldn't that just be full-circle? This is a name that comes courtesy of Bob Nightingale. We don't know how solid this is, but Nevin may be a candidate.

Look for Phil Nevin, their former No. 1 pick, to emerge as candidate for #Astros managerial opening. Getting reviews as Reno Aces manager.

The difference between Nevin and other managers with minor league coaching experience is that Nevin has been a bad minor league manager. He had a sub-.500 record in three seasons with the Tigers' Double-A and Triple-A affiliates before being fired after last season. He caught on with the Diamondbacks Triple-A affiliate this season and skippered them to a first-place finish in the PCL's Pacific North division.

Trey Hillman or Manny Acta or any other experienced managerial candidate

There is a school of thinking that, after going with a rookie manager, it would behoove the Astros to hire a manager who knows what it takes to motivate major leaguers. Most successful MLB managers weren't successful in their first go-round (like Joe Torre) or may still have something left in the tank (like Jim Leyland was for the Marlins and Tigers).

There's no clear-cut plan on how to pick a successful manager. Bruce Bochy was a good manager with the Padres, but his experience there wouldn't have immediately suggested he would pilot the Giants to two World Series titles. The same can be said of Mike Matheny or John Farrell, who didn't look automatically like guys who could get their teams to the promised land, either.

The case for bringing in an experienced manager would be that he could learn what went wrong the first time and fix it. He likely wouldn't try stuff like Porter's motivational sayings, which weren't accepted well by Astros players, according to multiple reports after Porter was fired.

The case against it would be that an established guy likely also has established ideas on how to work with a front office. He'd likely want more autonomy and might bristle if those Cray supercomputers spit out a lineup based on probabilities or Markov chains or run expectancy.

Acta had a reputation as a very saber-friendly manager and nearly had the job that went to Brad Mills in 2009. Yet, Acta was not very good when he got the job in Washington or in Cleveland. Is the third time the charm? What about Hillman, who came from a very non-analytical team in Kansas City and reportedly had some of the same issues Porter did as far as not taking help from coaches or the front office?

The only thing we can know from this process will be that the Astros keep things close to the vest. We won't find out much until a candidate gets close to the job. So, of these hypothetical candidates, who is your favorite? Is there anyone not on this list that you'd want the Astros to consider?