Jose Altuve and Victor Martinez's batting averages are only three points apart with one game remain. Who will take home the batting title?

It's fitting that Nick Tropeano makes his final start in New York, he was born in West Islip, New York. New York is in his veins. When his family attended his first start on September 10 in Seattle, they weren't dressed to the nines in Astros gear but instead they had local New York hockey teams' gear on. This will be NiTro's fourth start of the season, he has allowed seven earned runs over 16 2/3 innings thus far.

Bartolo Colon makes his 31st start for the Mets on Sunday, he has been the pitcher of record in 27 of his previous 30 starts. Colon is best known for his insane level of control and his comical adventures at the plate. He has a 4.56 ERA in 23 2/3 innings in september, and a 3.68 ERA in 93 innings pitch at Citi Field.

The pitching matchup is nice, but the more important story in the game is Jose Altuve. Altuve's lead on the American League batting crown shrunk with his 0-for-4 performance Saturday. Altuve's competition Victor Martinez went 1-for-2 before being pulled out of the game. Altuve currently sits a .340 batting average, while Martinez is three points behind at .337. Altuve already has the most hits for an Astros in one season and the most hits for a second baseman since 1936. If Altuve can hold on, he would be the first Astros in team history to win a batting title.

The following chart represents if both Jose Altuve and Victor Martinez got five at-bats on Sunday. Each axis is the respective outcomes if for example Altuve and Martinez went 0-for-5, 1-for-5, etc. 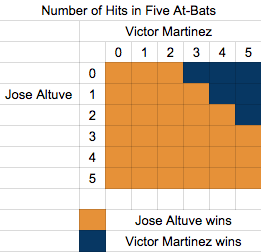 Altuve as previously mentioned is facing Bartolo Colon, who he is 5-for-14 against his career. Martinez faces Kyle Gibson, who he is 3-for-9 against in his career. Should be a fun final Sunday of baseball to say the least.