Astros quick hits: Jose Altuve's hits not as empty as you might think

Not all hit totals are created equal, but Jose Altuve's aren't as paltry as you'd expect.

Share All sharing options for: Astros quick hits: Jose Altuve's hits not as empty as you might think

Ed. note: Again, we're bringing you this rather new feature, with a short take on a subject that might've ended up as one item in a 3 Things. Alas, time is in short supply these days, so these items get their own space.

Jose Altuve is having a heck of a season. You know this. I know this. Jeff Luhnow knows this. He's already got the franchise record for hits and passed 220 over the weekend.

When Altuve crossed the 200-hit threshold, the eminent Zachary Levine tweeted about it, suggesting that by focusing on hits alone, we might be overstating his impact. Or something along those lines, I can't really remember past two days ago.

But, the point is, because Altuve doesn't hit a ton of home runs, his average and hit total can be a tad empty. Heck, Grant Brisbee felt the need to defend Altuve against these very charges this week.

Yet, let's look at Altuve's cohort now that he's in such lofty company. How many batters have totaled 220 hits since 1961? To Baseball Reference!

Only 22 seasons with 16 players reaching the mark. There's not an obscure name among them, either. Every one is a player who had a nice career and wouldn't be scoffed at the way someone like Freddy Sanchez might be.

The Joy of Jose Altuve 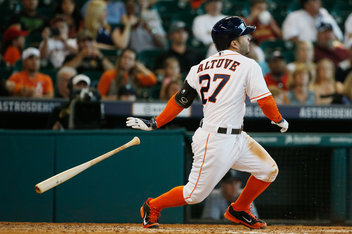 Summary or blurb about the related article

What's more, if we look at these players who have topped 220 hits by OPS+ (which puts performance into the context of the league in which they played), Altuve is nowhere near the bottom. In fact, he's 10th overall in OPS+ among this group.

Oh, and by the way, Altuve also has the most steals of any player with 220 or more hits. He's like a better version of Ichiro or Juan Pierre. Only Willie Wilson and Tommy Davis did it as young or younger than Altuve, too.

Batting average may be misleading. Hits aren't a great measuring point of offensive impact. But, hits, age and OPS+ tell the story here.

Altuve is having a brilliant, and impactful, season.