Jose Altuve deserves a raise: Why the second baseman is underpaid

Astros' Jose Altuve's 2014 season is 2nd-best among major league second-basemen. This despite a salary that is one-fifteenth that of league-leader Robinson Cano. Give that boy a raise!

Share All sharing options for: Jose Altuve deserves a raise: Why the second baseman is underpaid

In July of 2013, we reported that the Astros and All-Star second baseman Jose Altuve agreed to a 6-year contract that paid Altuve a guaranteed $12.5 million over four years, plus two option years worth another $12.5 million.  At the time, fans expressed one of the following three reactions:

All three of those opinions were completely valid and justifiable at the time.  Altuve was in the midst of a season that was a big step downward from his impressive but slightly-above-average rookie season.  He ended up 2013 with an 85 wRC+ (a measure of a player's offensive value where 100 is a league-average batter) and the perception was that because of Altuve's limited range, he was a poor defender.

With that backdrop, $12.5 million still seemed a bargain, and a wise signing for both Altuve and the Astros due to the uncertainty of his ceiling.  Had pitchers figured him out?  Could he make adjustments?  Had he reached the physical limitations of his small frame?  Or would he turn awesome?

Then came this season.  To date, Altuve is 2nd in MLB among second basemen in wRC+ at 133, behind only Robinson Cano.  On offense, he has been 33% more valuable than an average batter.  His 52 stolen bases leads the American league, and his .339 batting average and 206 hits lead the major leagues by a large margin.  Altuve should expect to receive MVP votes this season, and justifiably so.

Since 1962, Altuve's 2014 season ranks him 69th of 937 among qualified second basemen (93rd percentile).  Those ahead of him largely number seasons belonging to hall-of-famers or All-Stars such as Roberto Alomar, Ryne Sandberg, Cano, Jeff Kent, Joe Morgan, Craig Biggio, Rod Carew, and Chase Utley.

One of the biggest mistakes made by less-savvy GM's is to overpay for career years. In most cases, one should pay for what the player is projected to do in the future rather than what they have done in the past.  The St. Louis Cardinals adhered to this rule when they allowed Albert Pujols to sign with the Los Angeles Angels of Wherever-They-Are-This-Year for like five zillion dollars.  But sometimes recognizing that a player is underpaid, tearing up his contract, and giving him a higher level of compensation is the right thing to do.  Not just because it is deserved, which it must be for such a move to make sense, but because it engenders goodwill between the players and the organization.

The NFL's Houston Texans made such a deal when they awarded league-best defensive player JJ Watt with a new 6-year contract worth over $50 million in guaranteed dollars, up to $100 million for the life of the contract.  Watt, still on a rookie contract, would have been cheap for the Texans for several more years.  But they recognized that despite the effect of Watt's new deal on their salary cap, rewarding him for his dominant play and expected continuation of it would prove to fans, players, and agents alike that the Texans pay for excellence -- even when they don't contractually need to. 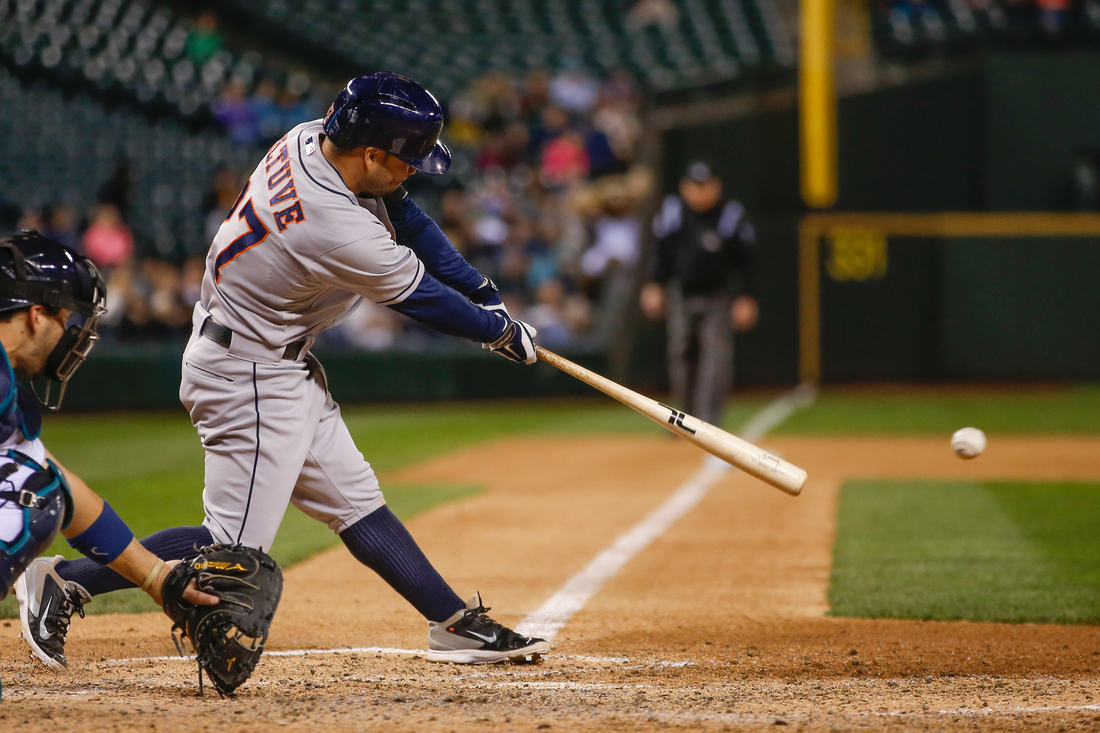 Back to baseball.  At an annual value of $3.125 million per season, Altuve's yearly salary is about half of the signing bonus paid to 2013 1st-overall draft pick Mark Appel before Appel had ever thrown a professional pitch.  It is not just an idle comparison for shock value - Altuve was signed as an international free agent for just $75,000 and subsisted on that plus a meager minor league salary (between $1,000 to $2,000 per month gross, and only during the regular season) for the first four years of his professional career.  Most of the players in the big leagues today were drafted in high rounds of the draft and are paid more for a signing bonus than most twenty-somethings earn during the first decade of their professional careers.  Meanwhile, the odds against 16-year-old Latin free agents are astronomically high, and so compared to his peers (star-level baseball players) he has made but a fraction of their earnings.  His current contract is only a little bit more annually than Astros Rookie first-baseman Jon Singleton, whose own contract was roundly lambasted by the media and other players for its 'cheapness'.  In fact, Altuve's contract only pays him $1.4 million in 2014, which is less than Singleton (who currently is batting .176) makes.  Heck, Ed Wade gave $4.5 million to 3B Pedro Feliz in 2010, who never posted a wRC+ higher than 101 in his career, and that was seven years earlier.  Altuve is a cheap star.

Statistical indicators show that Altuve may be able to maintain the type of season he's posted in 2014, or at least close enough that nobody will complain.  His BABIP sits at a career-high .358, but his profile as a high-contact speedster means that he should be able to sustain a higher BABIP than league-average.  His xBABIP (expected BABIP, a historically-derived stat that uses batted ball rates to predict what a player's BABIP should be if opponent defense played no part) sits at a shockingly-high .342, which indicates that his performance is not too wild of a statistical anomaly.  The Astros would be unwise to expect Altuve to be a .340 hitter over the next several years, but .320 is easily within the sphere of his abilities.

Also, Altuve's "poor defender" reputation seems more based on the perception that because of his height, his limited range prevents him from making plays that other second basemen would make.  Yes, his range is limited compared to other 2nd basemen.  But Altuve has successfully converted 98% of the plays considered "routine" by Inside Edge fielding scouts, and is within the expected range for all plays designated as "unlikely", "even chance", and "likely" to be made by an average defender.  In the opinion of this humble blogger, a player who executes routine plays at a near-100% rate is more valuable than one who occasionally makes highlight-reel ones but bungles a large number of the easy ones*.  Altuve's skill at turning routine plays into outs is the same skill that gave Derek Jeter his good defender reputation in his heyday despite limited range.

*cough* Jonathan Villar has a 94% rate at recording outs on routine plays, 379th out of 414 fielders who have played at least 200 innings in the field...including pitchers. *cough* 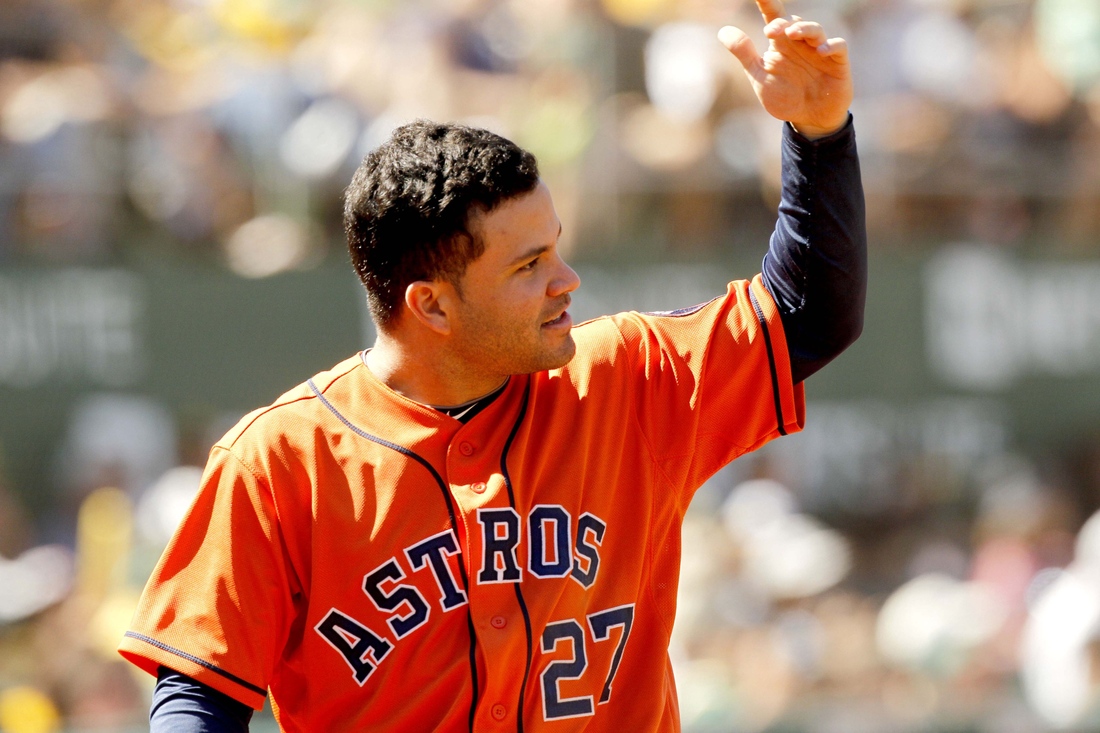 While Altuve is too early in his career to reach the type of salary commanded by Robinson Cano ($24M AAV, which is just silly for any player), there's a strong argument for him to be paid like some of the 2B's in the "B" tier.  While Jose Altuve is making $1.4 million this season, Dan Uggla has earned $13 million and has been cut by two different clubs this year.  Chase Utley is being paid $15 million for his first healthy season in living memory.  Aaron Hill is earning $11 million for posting a 76 wRC+.  Rather than suggesting those values for a new Altuve contract, they rather illustrate the folly of paying for older players heading towards the twilights of their careers.  The time to spend the money on a star-level player is when they are young and the club can control for how much of their prime a player can be kept.

Jose Altuve is 24 years old - younger than rookie teammate George Springer.  Conceivably, Altuve's performance will not significantly decline until six or seven years from now.  As such, a contract such as the one the Angels paid to Howie Kendrick (4 years, 33.5 million, for an annual value of over $8 million) would be a nice boost for Altuve while still giving the Astros good value.  Let's say, for grins, 5 years, $45 million with a club option or two will get it done.  That salary would make Altuve only the 9th-highest-paid second baseman in the majors, at an age where from a cost-for-production value standpoint, the Astros are still getting a bargain.

Given all of this, it would make sense for the Astros to engender some goodwill by tearing up Altuve's contract.  At his current ability and expected future performance, there is still the opportunity for the Astros to work a below-market-rate deal that would provide them plenty of value while still acknowledging Altuve's performance, and signalling to other players and free agents that hard work, a good attitude, and positive results will lead to a reward with this organization.