On a mission: The Corpus Christi Hooks in San Antonio

With the Hooks' regular season ending this afternoon, Edward S. Garza takes us back to the team's 7-3 win on August 24th. Here are some shots from the game.

Share All sharing options for: On a mission: The Corpus Christi Hooks in San Antonio

On Sunday, August 24th, I had the pleasure of seeing the Corpus Christi Hooks, the Astros' AA affiliate, visit the San Antonio Missions, the AA squad of the San Diego Padres. As soon as I realized the Hooks were in town, I headed down U.S. 90 to Nelson W. Wolff Municipal Stadium. The game took place on a sweltering evening, one that thankfully lacked humidity (as a native Houstonian, I appreciate the small things when it comes to climate).

Fittingly, earlier this summer I watched these teams play at Minute Maid Park for the first-ever Astros Futures Game, an experience I wrote about here at TCB. That day the Missions prevailed by one run in a slugfest. Nonetheless, I figured that this evening held better times for the Hooks, since the team's de facto ace, 20-year-old lefty Josh Hader, was starting. Indeed, though Hader surrendered three earned runs over five innings, his performance laid the groundwork for a 7-3 Hooks win.

In the end, Hader showed why he has graced Astros prospect rankings, and so did others. Second baseman Tony Kemp, for example, went five-for-five (!) on the night, tallying two RBIs on a double. There was also new acquisition Colin Moran, who displayed his plus bat-to-ball skills, collecting an RBI single. Both players have maintained solid on-base percentages this season.

And, of course, there were other quality prospects to watch. On defense, Teoscar Hernandez showed strong range in center field, running down balls that could've easily been doubles. From the bullpen, southpaw David Rollins worked 2.2 shutout innings, flashing a mid-90s fastball that embarrassed hitters, especially lefties. It will be fun to watch each player advance through the system.

But this article is more than a traditional recap. Throughout the evening, I snapped photos not only of the game, but also of the ballpark experience itself. Like any good minor league venue, Wolff Stadium kept us fans entertained whenever there was a break in the action.

With that in mind, enjoy these pictures and captions of the evening. There were numerous moments worth capturing.

(All pictures and captions are by Edward S. Garza, except for some shots by Ballapeño (this last part will make more sense).) 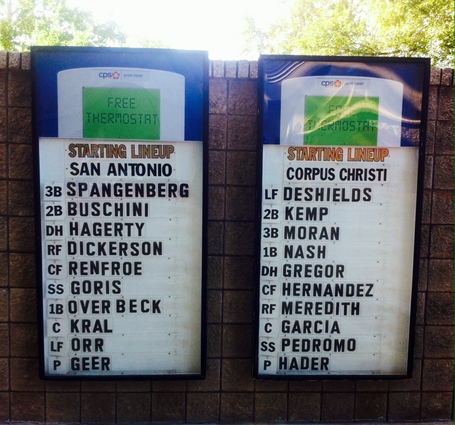 After entering the stadium, I saw two old-school marquees listing the day's lineups. 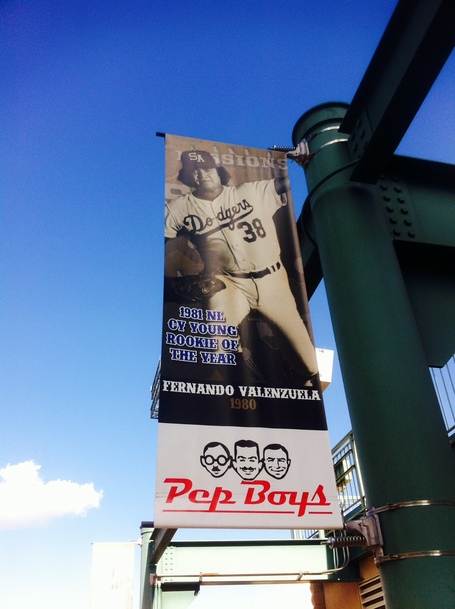 I also saw some banners displaying baseball greats who once played for the Missions. Here, for example, is Dodger icon Fernando Valenzuela. He was a Mission in 1980, the season before he won both Rookie of the Year and the Cy Young Award. 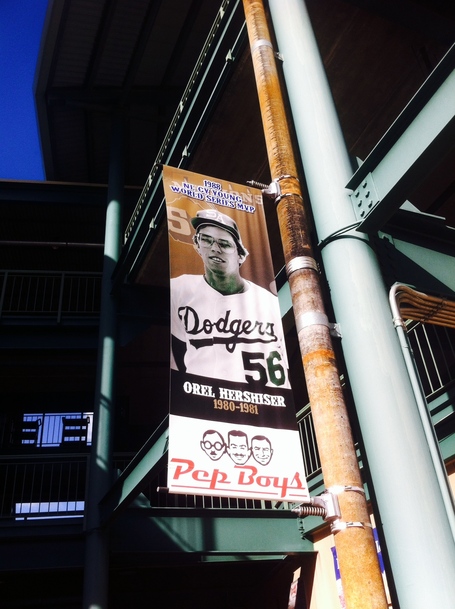 Continuing the L.A. theme--the Missions were a longtime affiliate of the Dodgers--I next saw a banner of Orel Hershiser, here doing his best impression of Napoleon Dynamite. 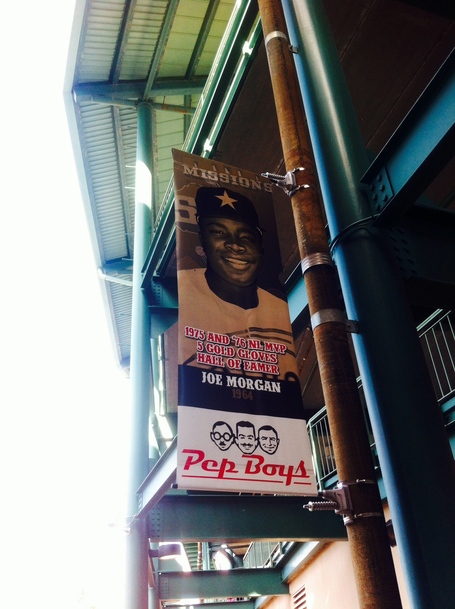 Then I saw a banner of Hall of Famer Joe Morgan, who was a Mission in 1964.

Walking down the concourse's left-field side, I also glimpsed an image of HOF-inductee Brooks Robinson, he of the 16 gold gloves. 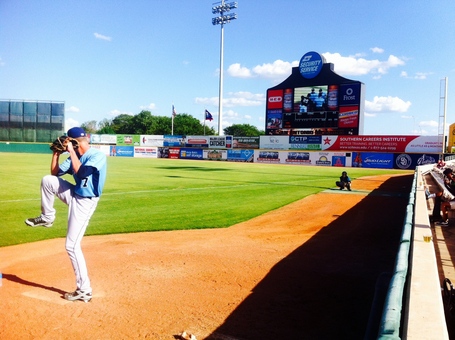 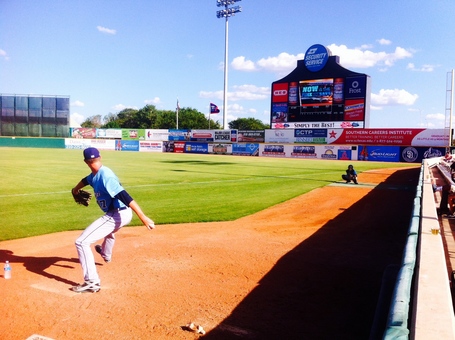 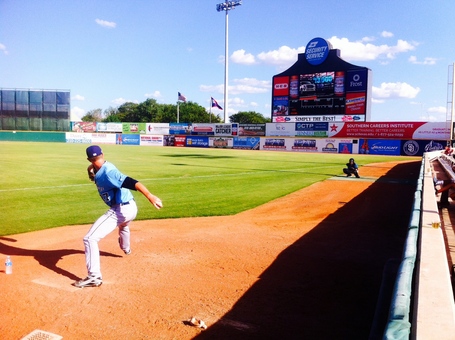 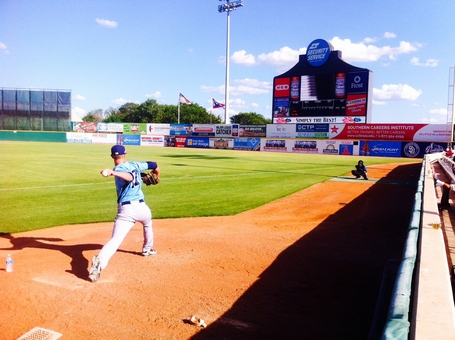 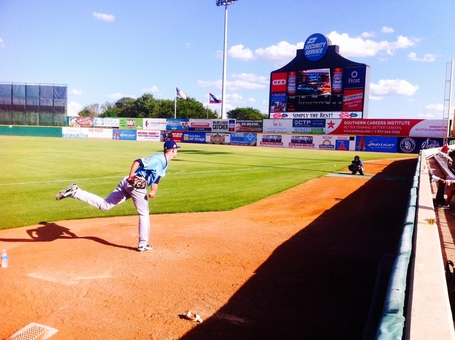 I arrived early enough to watch Hader warm up. His delivery was at times scattered, but it seemed that he'd gotten better at tightening and repeating it, all while harnessing his momentum. 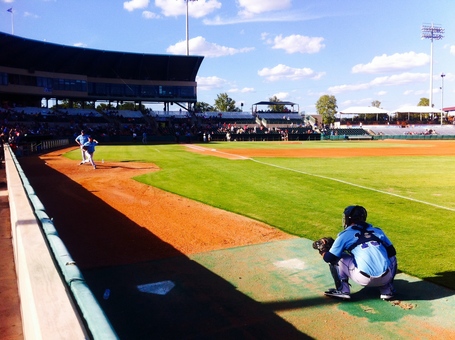 And here is a shot from the angle of the catcher, Rene Garcia. As you see, Hader pitched slightly across his body, a technique that may be altering his command. Behind him stood Hooks coach Doug Brocail. 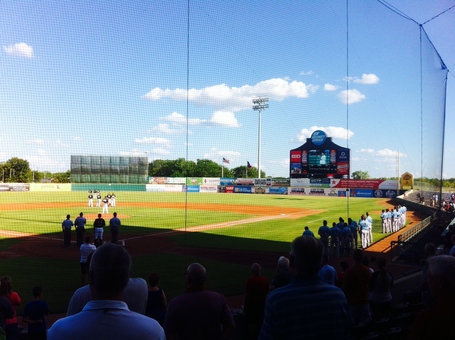 Most of the crowd arrived in time for the national anthem. 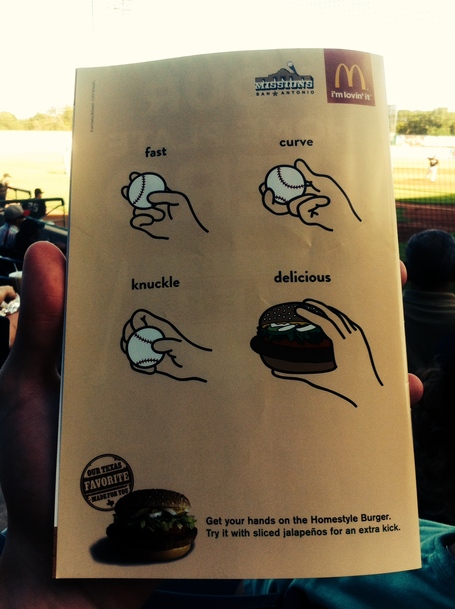 On the back of the game's program, there was perhaps the funniest McDonald's ad I've ever seen (not that the competition has been stiff). 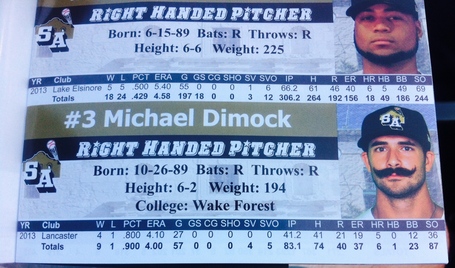 Reading through the program, I saw that the Missions now have Michael Dimock on their roster. He's a reliever who was on the Hooks as recently as the Astros Futures Game, where I photographed him for my article. I was glad to see he's found a spot elsewhere, and that he's still rockin' the handle-bar mustache. Well played, Dimock. 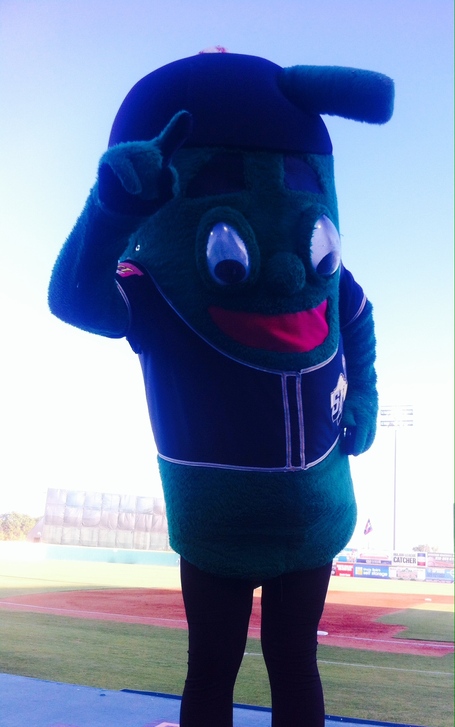 After a few innings, the Missions' gregarious mascot, Ballapeño, started walking on top of the Hooks' dugout, waving to get the fans pumped up. (Earlier he had successfully executed both the stanky leg and the wobble.) Seeing me taking pictures, he decided to strike a victorious pose. 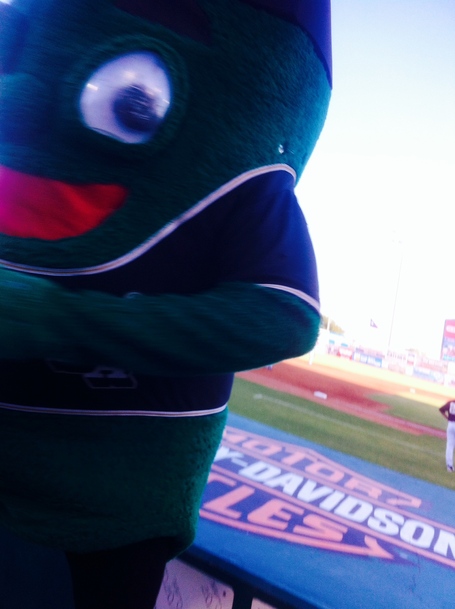 Ballapeño then stepped off the dugout and seemed ready to leave. It turned out, though, that he was just getting started. 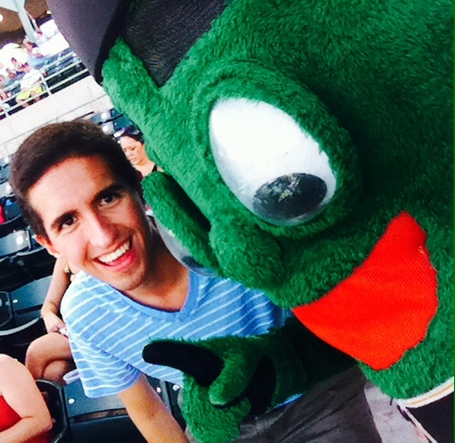 Extending his left hand, Ballapeño silently asked for my phone, which I reluctantly (and foolishly) gave him. He threw himself next to me and snapped ten selfies of us. They were nearly identical, but this one came out the best. 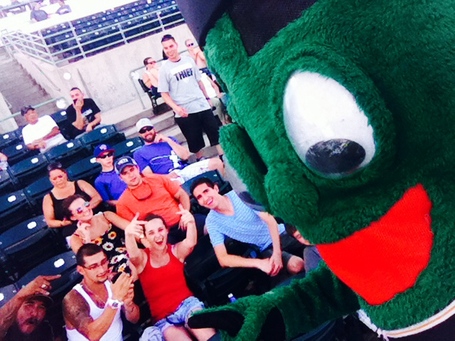 But then Ballapeño went crazy. He held onto my phone, jumped back on the Hooks' dugout, and took several more selfies, this time including more fans. 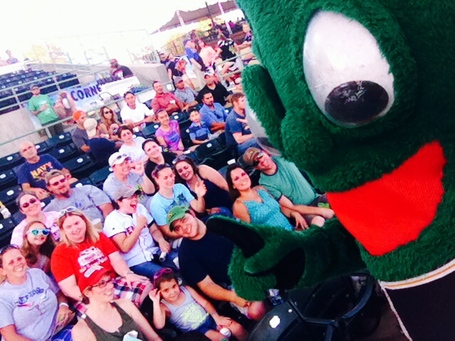 He did the same thing on the other edge of the dugout. 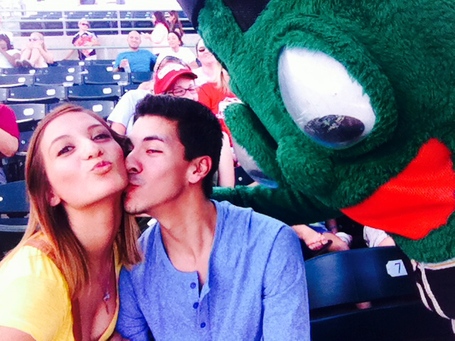 Then he started creepin' on couples. 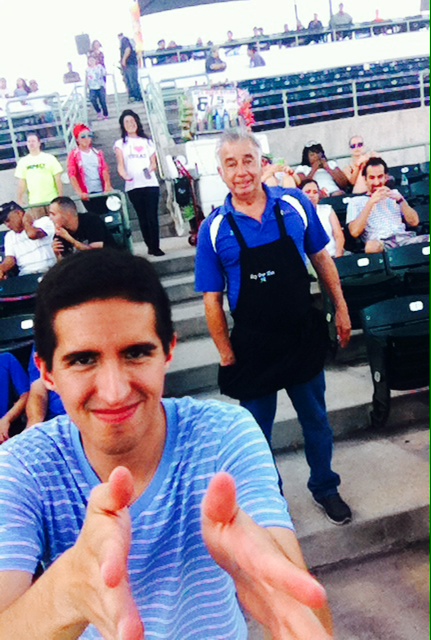 To top it off, Ballapeño refused to return my phone. (Perhaps my light blue shirt revealed my Hooks fandom.) Of course, he documented this moment as well, snapping this photo. Behind me stood an usher whose face showed a mix of amusement and genuine concern for my property. After hundreds of games and topical dances, had Ballapeño finally lost it? Well, I soon pried my phone from his spicy fingers, so we may never know.

(This story has an epilogue. In the middle of the eighth inning, I was walking near the men's restroom when Ballapeño stormed out the door and up the ramp, running as fast as his black tights would allow. (Apparently he was late for his middle-inning dance routine.) Behind him I heard the wail of a toilet. Though he was mostly panicked, Ballapeño gave me a wave and a doe-eyed nod, gestures that I took as an olive branch. "Hey, thanks for being a good sport back there," the oblong creature seemed to be saying. I smiled and nodded back, watching Ballapeño scurry into the night.) 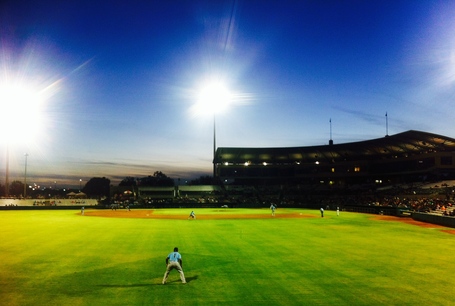 The Hooks defense was sharp overall, including Delino DeShields, Jr. (#1), who brought a center fielder's range to the corner. 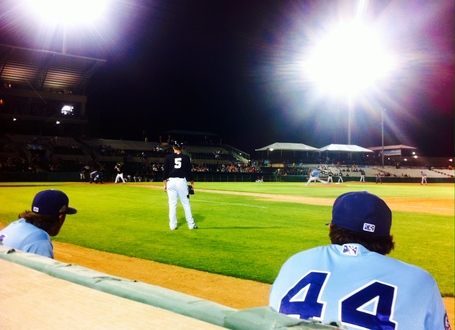 With the score 7-3 Hooks, the Missions threatened to inch closer in the bottom of the eighth, putting a runner on third base. However, Corpus reliever Ruben Alaniz (blur on mound) squelched the potential rally. Here he is delivering a called strike to end the inning. Left-handed reliever (and recent Arizona Fall League selection) Mitchell Lambson (#44) observed coolly. 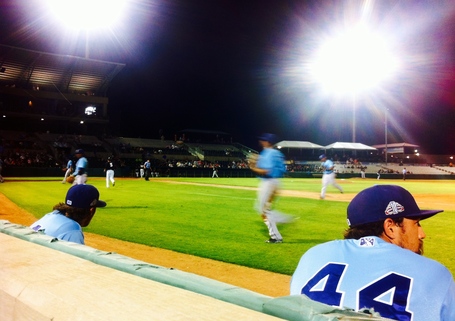 In general, the Hooks enjoyed a solid team win. It appears that the positive energy carried over to the next night's game, which Corpus won 23-7 (!). Go Hooks!