What to Expect from Mike Foltynewicz

The Astros have called up flame throwing right-hander Mike Foltynewicz, Subber10 breaks down what you can expect from him on the mound.

Share All sharing options for: What to Expect from Mike Foltynewicz

How can I tell you what to expect from a pitcher you probably have already seen? If you missed the Houston Astros game on Saturday, you missed Mike Foltynewicz's major league debut. It was simple, yet flashy. It's hard not to be flashy with a fastball that topped at 100.1 MPH according BrooksBaseball.net.  But, the simple aspect is that all he threw were blazing fastballs.

I guess there is a little more to tell you then.

Tim and I were able to catch Folty live back in May when he made a start for the Oklahoma City RedHawks against the Nashville Sounds. I was able to catch some video of Folty in which you can take a look at his stuff and his delivery.

Let's talk about that delivery first.

It's hard to throw as hard as Folty does without doing some good things mechanically. Things like getting good drive from your legs and hip as well as good hip rotation velocity. Those are all correlated with velocity and he does them well. It's not always easy for guys with his velocity to have repeatability of their mechanics or have their arms in good positions to protect themselves from injury. Folty does a lot of things well.

Folty has two measurements that are outside of the "Elite Pitchers" ranges. Those are the max knee height in the leg lift phase of his delivery and hip flexion at release point.

The max knee height is usually a concern with timing as well as aiding in creating momentum. He definitely has the momentum to his delivery. It allows for him to create a long stride as well. The issue is timing. When the leg gets too high, it can throw off timing for the push off the rubber as well as the timing of hip rotation. The timing for hip rotation can wreck havoc on trunk rotation and create both early and late arm action. That is the primary issue that Folty has with his delivery. That timing is what is causing issues with his control. 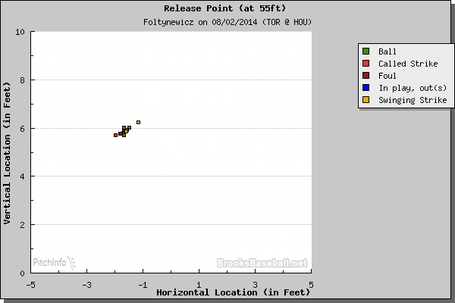 I caution you in drawing conclusions base on this graph of Folty's release point in his outing last Saturday since it was a ML debut and contained a lot more variables. However, it does illustrate that there is a spread in his release (remember he threw just fastballs).

The other metric is the hip flexion at release point. He's at 90 degrees which the range is 92-115 degrees. There is error in these measurements and this is based on just one pitch. So, he could actually be in range. So, it's important to look at how it correlates to aspects of the delivery. In this particular one, it has to do with the deceleration path. He is a bit upright in the deceleration phase. He counteracts that some by not having a firm front side so that the can get better forward rotation. He also extends his lead knee late which helps lessen the impact of his hip flexion angle. It's still not a great deceleration phase. That does add some stress to the shoulder. He would benefit from finishing off his pitches better with some improved hip flexion.

Everybody is probably wondering how his delivery affects his elbow since there continues to be a lot of talk about TJ this year.  He keeps his shoulder in range for abduction. He keeps his wrist inside his elbow (greater/less than 90 degrees of elbow flexion pending how you measure). He does a good job of pronating his wrist as well.

Velocity is a risk factor for elbow issues, but kinematic measurements are not a flag for him.

The fastball is well documented. He can hit 103 MPH. He can hit triple digits regularly. He sits in the mid to upper 90's. It's pure filth. He flashes some tail to it with the 2-seam. The 4-seam can flatten out but works very well up the zone.

The best off-speed at this point is the change up as he throws it in the mid-80's and creating 10-15 MPH separation. When used properly in the Effective Velocity method, that can be lethal and create a combination of whiffs and very weak contact.

He has two breaking balls, with either one having their days. The slider got a lot press last year as it was working well in his AA debut last year. However, when you have a 4-seam fastball like his, a curve is much more desirable. It was the main breaking ball when he was drafted and has been a weapon at times for him this year. It's not a big breaker but he can spin it well and can consistently be a 50 grade pitch. The slider flashes that same grade but is less consistent.

As GM Jeff Luhnow has said, he'll be used as a reliever this season as he is approaching his innings limit. That will a great spot for him as it will allow for him to use his fastball much more often and have rely on his secondaries less. That will allow him to be dominant when his control is on. However, if the control is not due to the timing in his delivery, things can get bad.

That's the thing with young pitchers though. They'll take their lumps with their delivery. Yet, with his athleticism and the magic that pitching coach Brent Strom has already shown that he possesses, I can see Folty improving the timing in his delivery.