For the first time ever, The Crawfish Boxes presents a one-inning Astros game recap.

Tonight's recap is going to be a little different.  Instead of recapping the entire ball game, in which the Astros defeated the Indians by a score of 5 to 1, I will only recap the last inning.  Here are innings 1 through 8 in one sentence:

Brad Peacock dealt, throwing 5 IP in 60 pitches with zero walks and 1 ER, but left early with forearm tightness, and after a Marwin Gonzalez home run followed by an answering homer by the Indians tied the game at 1 to 1, nothing happened until the 9th inning.

There, now that's out of the way.

The ninth inning was legitimately more entertaining than the rest of the game, while simultaneously being a little sad.  Here it is, moment-by-moment. 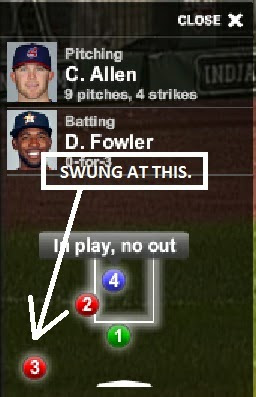 Then the Indians come to bat against a recently-ailing Chad Qualls in the bottom of the frame.

@CRPerry13 Houston We Have a Problem. @alysonfooter

@CRPerry13 @CrawfishBoxes The Pen Is Mightier and Adored.

@CRPerry13 @CrawfishBoxes This was good - from @nitetimeguy- "That was a very Astros 2013 performance.......by The Indians."

At least Mike owns up...

@CRPerry13 @CrawfishBoxes You didn't say they had to be good headlines.

@CRPerry13 @CrawfishBoxes "Call the stewardess Vaughn. I need one of those air bags."

And perhaps even more apt:

Then, in timely fashion, Astros' Social Media Manager Amanda Rykoff comes in with a half-court three just after the buzzer. Which, of course, means I have to edit this post to include her suggestion, so that she will keep inviting me to blogger events at the park. Sigh. What one won't do...

Astros Make Most of Mistakes By the Lake. You're welcome, @CRPerry13 @CrawfishBoxes