An undrafted free agent out of the Dominican Republic, Teoscar Hernandez has faced his share of adversity, away from his family eleven months a year while he tries to find his way to the major leagues. He handles it the only way he knows how: By working harder than everyone else.

About seventy feet long, nine feet wide, lined with a chain link fence. And eleven months a year, it's a safe bet that you'll find Houston Astros prospect Teoscar Hernandez there. It's his safe place. Every day, rain or shine, he's there, working.

This particular batting cage is in Lancaster, California. It sits just outside the Lancaster Jethawks' clubhouse, and the team's hitting coach, Darryl ("D-Rob") Robinson, considers it to be his office. "He beats me to the office every day," he says of Hernandez. "He's continuously trying to get better. He wants to learn, he wants to know. He takes things in. Then, in the game, he goes out and does it."

Hernandez is listed at 6'2", 180 lbs., with a lean, sinewy body. At rest (which he almost never is), he looks uneasy. Anxious. Ready to leap into action at a moment's notice. Even when he jokes and laughs with his teammates - especially his good friend, Danry Vasquez - you get the sense that every moment he spends not working at his craft, he considers to be a moment lost. 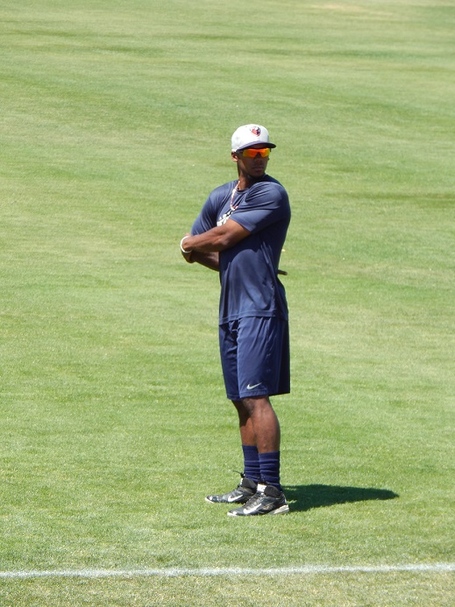 "Sometimes people don't see how hard we work in the Dominican. We try to do our very best to help our family out there and try to get a better life." - Teoscar Hernandez

Hard work is nothing new to Hernandez. In fact, the way he sees it, he doesn't have a choice. He began playing baseball in the Dominican Republic when he was four years old, and eventually he moved into his manager's house. "When I practiced, before I signed, I wake up like five o'clock in the morning and I go to bed at ten, eleven o'clock at night," he told me. "We worked every day. Long days. Sometimes people don't see how hard we work in the Dominican. We put in so much effort to try to get signed to get some money. We try to do our very best to help our family out there and try to get a better life."

He sees his family in the Dominican for maybe one month out of the year, he says. The rest of the time, he's working, whether it's full-season ball in the U.S., instructs in Florida, or winter ball back in the Dominican."I don't have a lot of occasion to see my family. Maybe a month. Get some rest and come out and start working again."

Coming into the 2014 season, Hernandez was rated the Houston Astros' No. 16 prospect by Baseball America, No. 12 by MLB.com and Baseball Prospectus, and all the way down at No. 20 here at The Crawfish Boxes. All sources have mentioned that he has all five tools.

If you ever need an example of the uncertainty of the International Free Agent (IFA) market, look no further than Hernandez. Not long after the Astros inked Ariel Ovando for $2.6 million, Hernandez was signed for the paltry sum of $20,000. At the time, his signing was a favor to then-Latin America director Felix Francisco, whose brother-in-law was a friend of Hernandez's family. Hernandez has eclipsed Ovando as a prospect, at less than one percent of the cost.

[All scouting grades are my own, and differ from those found in other sources. Stats are current as of June 29.]

Folks in Lancaster have been spoiled in center field. In 2013, Andrew Aplin made highlight-reel catches on a nightly basis, helping lead the Jethawks to a California League South Division championship. The year before that, it was super-prospect George Springer doing the honors. Entering 2014, Hernandez had some big shoes to fill, particularly off of reports that in Quad Cities, he lacked a decisive first step.

"I never saw him when he didn't have that first step," Robinson said. "That was what we heard - that the first step wasn't very good. But he took the information that Vince Coleman supplied, and he made himself better. When I saw him for the first time, in instructional ball, I was thinking, 'Here's a kid that can play center field. He's a true center fielder.'"

It's not just the improved first step, Robinson says. "His routes to the ball are incredible. I see him all the time, taking routes during BP, even. He picks up the ball early, he jumps early."

It's no secret how he improved. He worked.

"Here, the wind is tough," Hernandez says of the unrelenting Lancaster winds. "This season, I wanted to be better on defense. So I worked hard in the offseason. I worked hard on my defense. My defense now is better than last year."

Hernandez is tied for first among California League center fielders with six outfield assists this season. He had nine in center field in 2013 for the Quad Cities River Bandits, his first season as a full-time center fielder.

Arm strength is often the hardest tool to gauge, because evaluators see it tested so infrequently.  When Baseball Prospectus's Chris Rodriguez tagged Hernandez's arm with a future 50 grade, despite having seen him on seven different occasions in the month of April, he may have been under-selling the young center fielder.

"Solid-average arm; has good carry; hits the cutoff man with ease; enough arm to stick in center; aggressive in other aspects, but not careless with the arm."

In long-toss drills, hours before game time, Hernandez was able to make accurate throws from over three hundred feet. Of course, long-toss drills aren't game situations. But it's not unrealistic to expect a 60 Arm tool from Hernandez, based on reports from those who see him every day.

Recently, Hernandez was tied for third in the Cal League with 23 steals, and had been caught just six times - fewer than everyone else tied with or above him on that list. I've clocked him regularly at 4.20-4.22 seconds to first base, and he runs the bases on a clean, straight line with little to no wasted effort.

Hernandez is built like a strong safety, with a lean, compact, muscular build. He doesn't look like a burner, which makes his speed much more surprising when you see him take off. He accelerates quickly and doesn't waste energy when running.

When looking at the California League home run leaderboards, you expect to see a few Jethawks. The Hangar has a well-deserved reputation as a hitters' park, and Astros prospect hounds have been bitten in the past. Names like Jon Gaston, Kody Hinze and Koby Clemens spring to mind. Power can be a mirage in the California desert.

Hernandez's fourteen home runs do carry some validity. They easily lead the team. The next-highest total is seven, which Rio Ruiz and Brandon Meredith have each hit. He also pairs it with team-leading totals in doubles (21) and triples (7).

A look at MLB Farm shows quite a bit about Hernandez's approach: 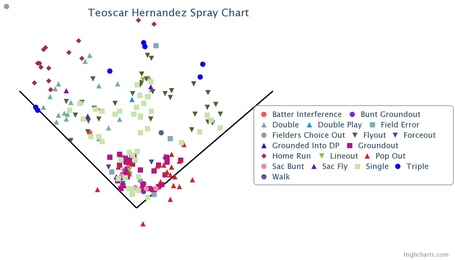 The majority of his power has gone to left field - his pull field, but traditionally away from the Lancaster winds. He doesn't have a strong opposite-field approach, but he does use his speed to turn singles into doubles and balls in the gap into triples.

As Robinson puts it: "There's been a couple instances during a game where he's pulled off of pitches. I just tell him, 'Get a pitch you can drive the other way,' just to change the mindset a little bit. So he'll go up there and he may not hit the ball the other way, but he won't spin off of his pitches. He'll go to the gap, or hit a line drive up the middle. Those are the things that happen as a hitter. Occasionally, you just get too quick. Not trusting yourself. You want to spin on it, turn on it."

Perhaps most-surprising are his home/road splits. Offensively, Hernandez has performed much better in 2014 on the road, across the board. Batting average, on-base percentage, slugging, steals, extra-base hits of all varieties:

The only real limit to Hernandez's power is going to be his hit tool:

Hernandez combines exceptional bat speed and a quick trigger to create hard contact. Right now, at 21 years old, he has work to do on his pitch recognition, and he's the first to mention it.

When I asked him what he wanted to work on most, he didn't hesitate to say, "The strike zone." He didn't elaborate. Those three words said everything.

Most people you talk to acknowledge that there will always be some swing-and-miss to his game. His focus right now is on reducing it. And how does he do that? The answer takes us back to the beginning of our story.

Having watched him throughout the season, the video above is actually very encouraging. In April, Hernandez had a tendency to let his hands push forward early. He's clearly worked on clearing his lower body first, and letting his hands follow his hips, allowing him to stay inside the ball and giving him more time to read the pitch and acquire the necessary information on pitch type before committing to his swing.

Again, it's one thing to do this in batting practice. It's another thing to do it in-game, and Hernandez ended up 1-for-5 with three strikeouts during the game following this BP session. Still, it demonstrates an understanding of the principles. Repetition will allow him to commit them to muscle memory, and to instinctively perform the same way in-game.

If it hasn't been drilled home enough, Hernandez pairs his tools with an exceptional work ethic. He hustles, both out of the box and onto the field, and does his homework on opposing hitters. 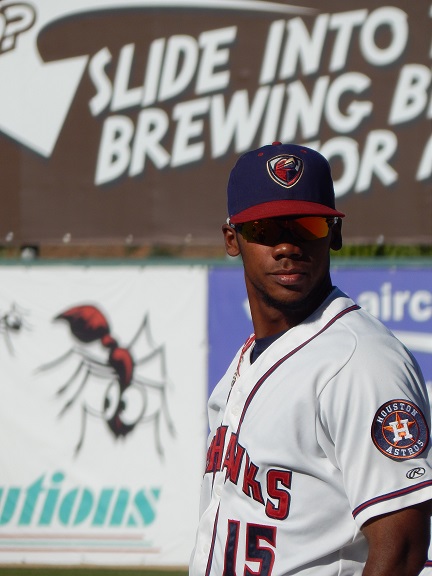 His body is more or less maxed out. There isn't much room for growth, which in this case is a good thing, as much of his value lies in his quick-twitch athleticism and his speed, which plays both on offense and on defense. It's hard to imagine he'll lose much of that moving forward.

He's also extremely coachable, and has drawn rave reviews from front office staff and coaches throughout the Houston Astros system.

When I asked Robinson for a comp for Hernandez, he hesitated for a moment. Before I tell you his answer, I will present:

Both players were plus center fielders, and both seasons were in Lancaster.  Player A was George Springer in 2012. Player B is Teoscar Hernandez so far this season. While Springer displayed slightly more power, Hernandez's speed has played in-game better.

"I enjoy watching (Hernandez) play. He can run, he can throw, he can hit. Hit for power. He plays great defense. I find myself just watching him a lot. He's getting ready to do something. I say it all the time."

I caught up with a scouting contact of mine recently, who had this to say: "He's 21 years old. If this guy was coming out of UConn right now like Springer, with those tools and those numbers, which one would you take? It's a tough choice. And he's not doing it in the Big East. He's doing it as a pro in the California League. Plus center fielder with power? That's a guy to dream on."

To Hernandez, the dream is his life.

The game he's been playing since he was four years old, idolizing Vladimir Guerrero and, later, Albert Pujols.

The game that's taken him to a foreign country, away from his family.

"Baseball is the same everywhere," Hernandez says. "I just try to work hard every day, all year, to get better. Just keep going, work hard, and do my best. It's tough to be up here and leave our family in our country. But we need to do it. Work hard and do good."

(All photos in this article by Anthony Boyer, http://www.crawfishboxes.com)