Share All sharing options for: Planes, Shinkansens and Dekatora: Jeff and Kevin Do Japan

Despite the gulf, physical and cultural, between the United States and Japan, both societies are, in the end, made up of people, and people everywhere – when you strip away their superficial differences – are crazy.

The Following Article Is Loosely Based on True Events

In between making up off-color limericks, exchanging recipes, assigning secret code names, debating favorite episodes of the Golden Girls, uploading our Ren Fair and Cosplay photos and negotiating salary with David, the writers on rare occasion use the email exchanges to run ideas by each other. When the idea of writing about Jeff Luhnow's tweets regarding his two-week homestay trip to Japan with classmate and wise-cracking best friend Kevin Goldstein was suggested, I jumped at the opportunity. I explained I was best suited for this prized assignment because I had lived for over four years in Japan, all of my offspring have Japanese first names and I have been compared to Hemingway (for my paranoia and drinking). I even recommended an amazing book about the historical cultural clash involving baseball in Japan: You Gotta Have Wa by the journalist Robert Whiting. No really -- it's a great book.

I had pulled out all the stops. Like a German in a pig sty or a Russian autocrat eyeing a swathe of neighboring countries, I wanted this bad. It was the clichéd plum assignment, the Toyota Prius of TCB articles, so imagine my excitement when David personally assigned it to me, using my code name, 'Jackal'. 'Sugar Daddy' had made his decision so there was nothing to be done. He then gave us his trademark ‘GET BACK TO WORK. I'M NOT PAYING YOU FOR DOING NOTHING!" which what it lacks in protocol is made up for by a certain clumsy, unintended accuracy.

The other writers expressed their great collective confidence in me subtly but clearly with responses such as "Him? Not him! Anyone but him!", "%*!^%!" and "Oh well." But this task was daunting: my fellow writers had suggestions and they seemed to want an all-encompassing, sweeping, Pasternakian screenplay founded upon tweets that would reference everything from Planes, Trains and Automobiles to The Hangover. They wanted a darkly comedic buddy road movie that seamlessly blended sabermetrics with sushi. "Make it edgy but not too edgy," one helpfully suggested.

It wasn't just the automatic comedic gold that comes from anything involving baseball and Japan (see The Bad News Bears Go to Japan and Mr. Baseball) that was attractive to me as a non-serious writer. It was also a chance to tell my Japan stories to a large, somewhat captive audience. I could tell them about the time I stepped onto a conspicuously empty train car, on an otherwise packed train, to encounter a drunk yakuza in a pimp-like white suit reclining across an entire row of seats using a pineapple as a pillow. Apparently that's enough to clear out a car. Or the time on a different late-night train ride home a drunk salaryman serenaded me with Hey Jude. Or the time I was accused by a little old lady from my neighborhood of stealing from my own house because she caught me red-handed leaving it with ... a duffle bag filled with my own crap. Or the time that I found myself waiting in line behind octogenarians halfway up Mt. Fuji at 2:00 a.m. Seriously: even Mt. Fuji after midnight has lines.

Or I could tell them about the nice, exotic trappings of everyday life: the vending machines with beer and coffee; the chain of English conversation schools called Let's English; my prized Japanese-English t-shirts that say simply, ‘eat poo'; conveyor belt sushi; the never-know-which-you're-going-to-get polarized traditional squat versus space age toilets; the 7-Elevens with rice balls instead of hot dogs; the perfectly sweet and polite populace; the all-you-can-drink specials at some restaurants that often include whiskey.

Or I could list my pet peeves and things that started to drag me down and drive me out: the pushing and shoving in public; the smoke-filled ... everything; the homogeneity; the assumptions; the poker-faced middle-aged obachan ladies, flying down the sidewalks on their bicycles, just daring pedestrians to exist; the refusal to answer a normal freaking question, by tilting one's head and sucking in air; the formal and informal rules, everywhere, constantly; and, most of all, the unanimous approval and ubiquity of The Carpenters.

But then I realized that only a truly selfish person with significant self-esteem issues would use this forum for those purposes. So my natural humility and altruism won out, as is so often the case. I decided to not make this about me. You're welcome.

How should I do that, I asked myself? They want movie references, I'll give ‘em references. Slumping into my beanbag, pencil and Post-Its in hand, I listed off applicable references and influences for what would be an opus of a screenplay. First, there were the obvious ones: Mr. Baseball, The Bad News Bears Go to Japan, Shall We Dance, The Hangover, The Odd Couple, Lost in Translation, Rising Sun, Black Rain, Thelma and Louise, and Hostel. Then there were the not so obvious ones: The Brothers Karamazov and The Tempest, for starters. This project was quickly becoming unmanageable. 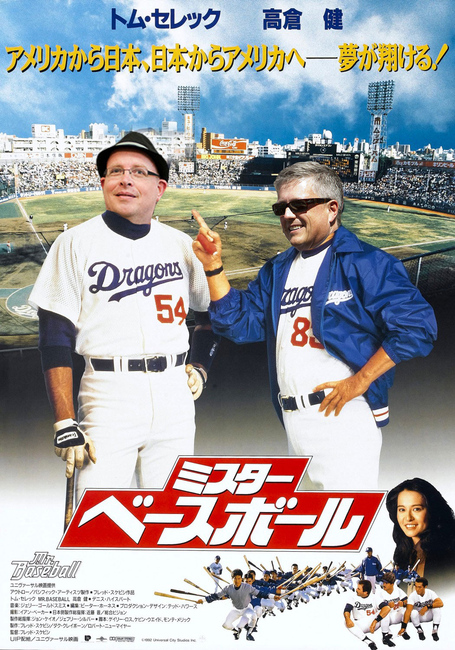 I frowned and took another deep, satisfying swig of Pocari Sweat followed by a chaser of Calpis and decided to just do this normally, like a real writer, by beginning with the purpose of the trip. Which was, I was surprised to learn, not actually a homestay trip to live with Japanese families and learn about the culture but a business trip to establish professional relationships with local Japanese baseball scouts, teams, authorities and players as a first step toward building a lasting, fruitful presence in Japan. Given the upsurge in available Japanese players, this made immediate intuitive sense to me: there is a gap in the market waiting for the right front office to exploit. Teams are paying big money for players they know very little about. That's when I realized I had another mystery on my hands because foreign countries plus money equals corruption, which is a subject I know a thing or two about, as an official Twitter Corruption Expert. It's axiomatic. I decided to get to the bottom of it, and fast.

I began the way I always do: I hit the stacks, I plowed through the microfiche, I sweet-talked the librarians, I called up my sources and leaned heavy on my stool pigeons. But nobody was talking. There just hasn't been too much in-depth coverage of their trip. Then it hit me! Luhnow has been tweeting up a storm about Japan, Japanese life and, of course, baseball. I could look there to expose the dark underbelly of this trip. This series of tweets called Random Observations from a Mexican-American in Tokyo, had a suspicious look to them. I decided to start there.

Uh-oh! Luhnow's gone native! Do you read me, NSA: El Ocelot se fue! I repeat: El Ocelot se fue. Seriously, Jeff, this isn't Hawaii and you're not Elvis. This isn't Tahiti and you're not Brando. As a blood-sworn member of the Defending Every Single Thing Luhnow Does No Matter What Just To Anger Commenters Club (DESTLDNMWJTACC), I implore you to rethink this explicitly communist rhetoric.

Except ironic humor, Jeff. Japan is the world's largest ‘tough room'. I had a friend who had a friend who was bicultural and could make people laugh in both languages. He was basically a cult figure just for that.

4. Emperor's Palace is quite the crib (ran around it twice so far).

Yes. It's a shame that the nicest park in Tokyo has such restricted access or you could have run through it. And passing along mad respect props from Emperor Akihito, AKA 'Akimatic 4 the People' for the shout-out to his crib!

5. Many wear masks (not sure why really).

Because Japanese people are thoughtful and intelligent. If you've got a cold or hay fever, you wear a surgical mask so as not to spray the malignant, murderous life forms inside of you all over everybody around you. It makes a lot of sense, especially in a closely-packed place. (Quick aside: Tokyo is considered by some the 'pollen capital' of the world due to a post- WWII cedar reforestation campaign.)

6. Food is great, unlimited sashimi and cold beer- best eateries are under the train tracks!

No argument on the potables and grub but the best stabbings are also under the train tracks.

8. People wait at the crosswalks to cross even when no cars.

That is exotic in a very Seattle kind of way.

9. Must be almost no theft bc many unlocked bikes around!

To paraphrase Chief Joseph, Hear me my chiefs, I will make no more jokes forever because this one is serious. You can leave pretty much anything, anywhere and come back later and find it there and it's basically the greatest thing on earth that you don't really, truly appreciate until you absent-mindedly leave your wallet on the fourth car from the back of the Chuo Line, go back three hours later and find it. Anything: your keys, money, the briefcase from Pulp Fiction, the suitcase from What's Up Doc?, the other suitcase from Dumb and Dumber. Anything.

It is weird the way that works, right? They smoke like chimneys, drink like Icelanders, sleep three hours a night, devote their lives to stressed-filled jobs and homes but they're thin and live to be a 185.

But wait! He also tweeted about baseball. Let's have a look at those (since this is a forum dedicated to baseball):

Seems to be similar deliveries among many Japanese pitchers, very athletic delivery using their core to generate power.

I will take his word for it. Leave it to the Japanese to get the mechanics right.

They play a ton of small ball, speed plays. Fans cheer loudly for walks and execution of fundamentals. No radical ways like shifting.

I remember this well. Leave it to the Japanese to do things perfectly, but well within the box.

Yes they have cheerleaders, as they do in Latin America... also have college age women dressed in colorful outfits with backpacks of beer!

I remember those women. I also remember the young beer guy at the Baystars game being very lively, funny and extroverted and thinking to myself, "So this is where they stash those people!"

I found Travis Blackley, Brandon Dickson, Andrew Jones among other imports. Lots of guys you say "so that's where they are!"

Some people go to jump start or revive their careers. They stay a few years and then return, often as retired ex-baseball players.

Some players don't fit in. For the most embarrassing examples of that, obtain and read You Gotta Have Wa, recommended above, especially the chapter on Joe Pepitone, who was so out-of-place his name became slang for 'slacker'. And not in a good way.

And some athletes, baseball players and otherwise, wind up fitting in. They learn Japanese, they show up constantly on talk shows to be admired and marveled at, like exhibits in a zoo; they even sometimes obtain citizenship, no easy feat that. I always liked Bobby Rose of my adopted hometown Yokohama Baystars (who were managed by Bobby Valentine). Rose, a competent 2B and all-around great guy, settled into Japan with his family and made it home. I wonder if he still lives there.

This is similar to high school baseball. The annual high school tournament is like our March Madness, only bigger. I was there the year the whole nation went ga-ga over Daisuke in the 1998 tournament.