In trying to deter someone from using my friend's original SpringerDinger graphic I stumbled upon a tangled web of lies, fakes, and overall seedy behavior. This is Part 1 of the Astros Catfish saga... 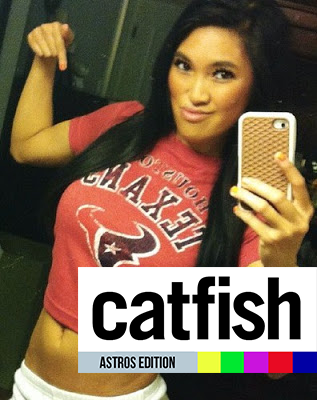 Did you miss the "excitement" of the #AstrosCatfish scandal on Twitter on Tuesday evening? If so, here's the whole story as best as I can retell it.

It all started with a tweet from someone called @texansbabe regarding a shirt "she" was selling on a popular site called Teespring. Teespring allows an individual to upload images to t-shirts and set goals for sales. If the t-shirt design is purchased by enough people it will go into production and only then will the designer get the $$ from the sales. Well, I had a slight problem with this particular t-shirt. 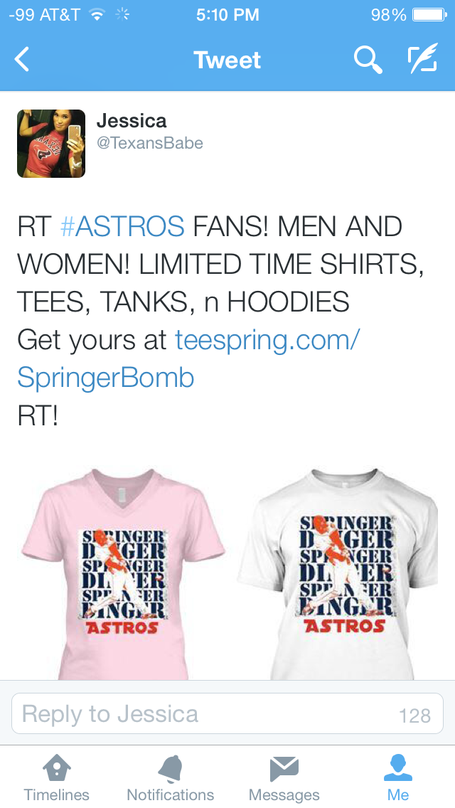 The image on the shirt was an original creation by Ryan Dunsmore (@d_more55). You may have seen this particular image before. 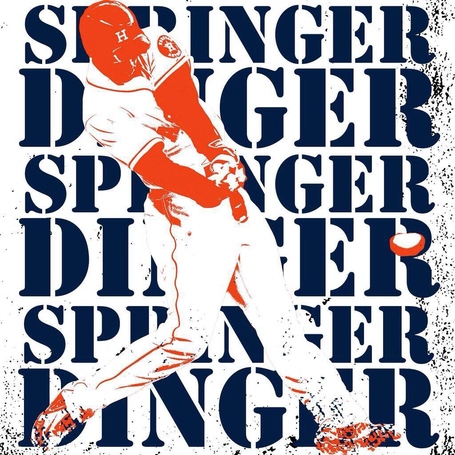 You're probably thinking, "I would LOVE to buy that shirt!" Of course, you would. We all would. But in my opinion that doesn't give you the right to steal that graphic, put it on a t-shirt, then try to make $$ off of it. But you might be wondering, what's the point? Was @texansbabe trying to get rich? Not according to her/him. They claimed that profits from the t-shirt were going to be used to, "keep ads off our website." Who's site???? Here's where it all went crazy and I turned into a Twitter Detective with obviously too much time on my hands.

At first @texansbabe claimed that he/she never knew the graphic belonged to anyone. They simply googled the image and thought it would be fine to use. Keep that in mind for much later. So again, having too much time on my hands, I decided to Google the words, "texans babe". Imagine my surprise when I discovered several images on the Google search that had previously been posted to @texansbabe account under the guise of selfies. Below are three of the images he/she posted. 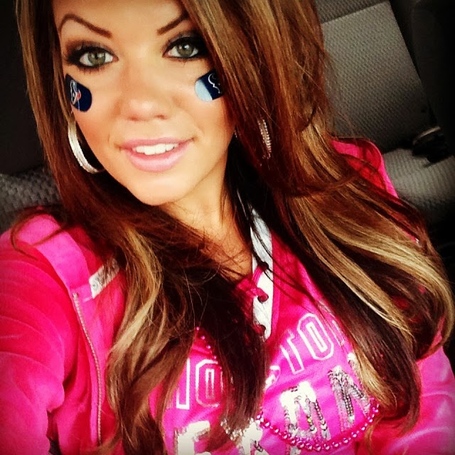 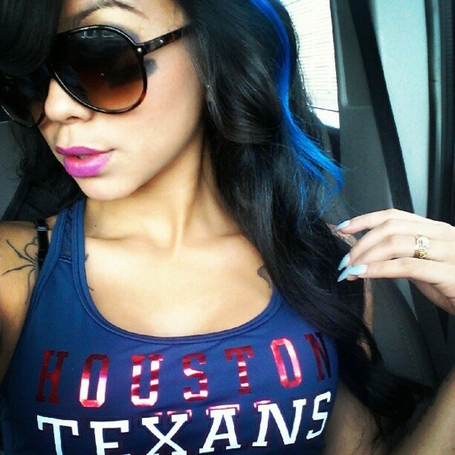 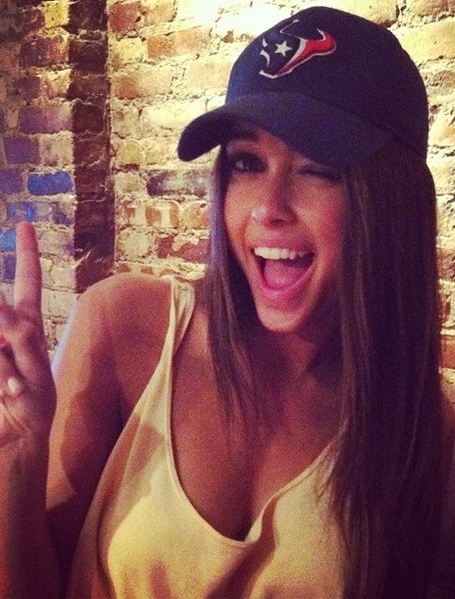 It's just my opinion, but those three girls A) look nothing alike, and B) look nothing like @texansbabe's avatar shown at the beginning of this article. Very suspicious.

So, I tweeted to @texansbabe asking what was up with all the fake selfies stolen from Google Image searches. I was quickly blocked. Undeterred, I began openly questioning this person on Twitter and lo and behold I was contacted by one of my followers!! Here's that interaction. 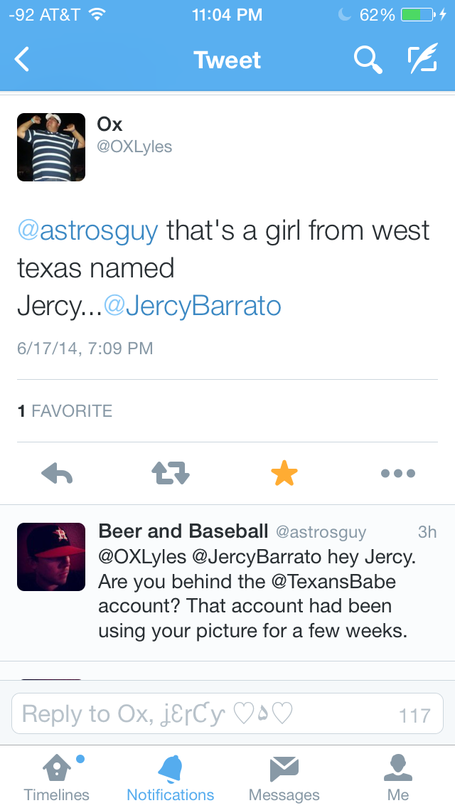 Guess what? Jercy had absolutely no clue that someone was using her photograph as their avatar!! CATFISHED! 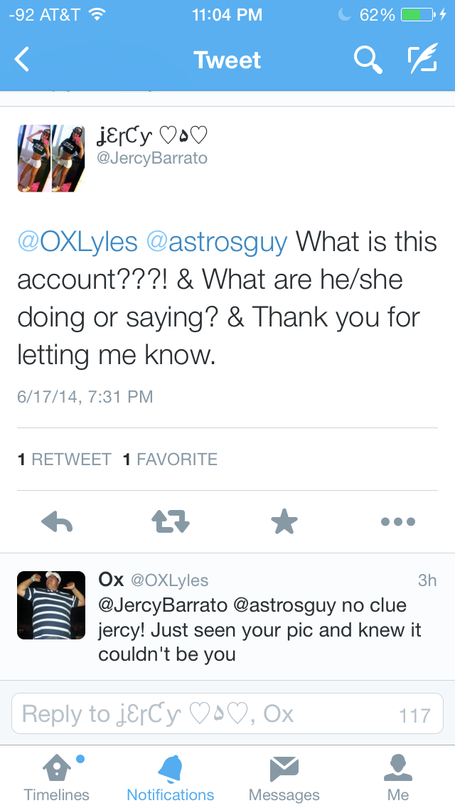 One more from @JercyBarrato. She was not very happy with someone using her photo as their main profile picture! Do you blame her? 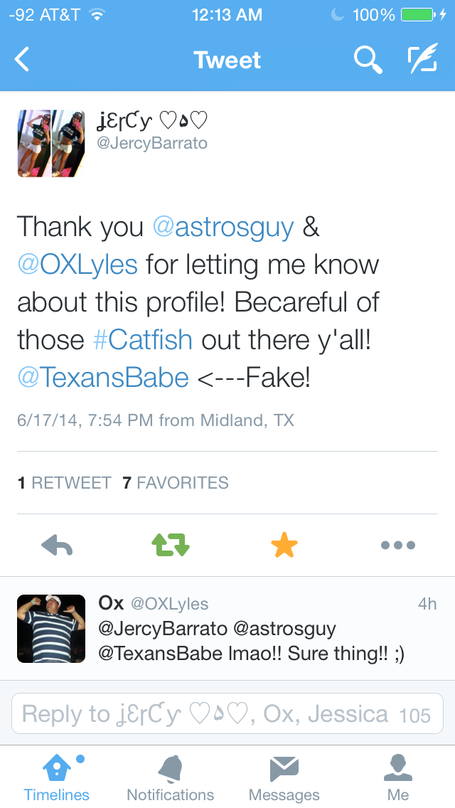 So you'd think that would be all to the story right?? WRONG. Before Jercy and I contacted @texansbabe about the use of Jercy's photo, we discovered that he/she was busy trying to get someone to convince us all that he/she was real. So they asked Ryan Avera (@ryanavera) to vouch for them. I figured the easiest way to solve this riddle quickly would be to get @texansbabe to post a pic of himself/herself with today's date and the tag #GoStros. Here was Mr. Avera's response to that suggestion. 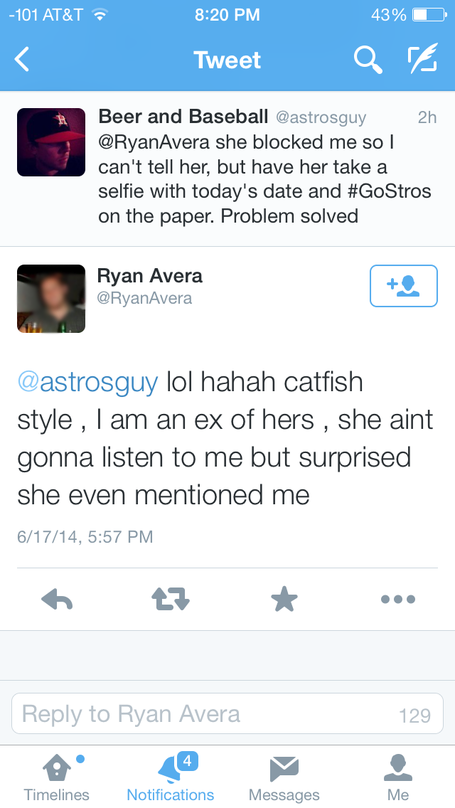 That's where Part 1 ends. This strange account that several people had suspected of being fake for quite some time actually has an ex-boyfriend who appears to be very real?? Could I have been wrong about @texansbabe? I doubt it. Not only did they NOT take the simple photograph to prove she existed, he/she actually deleted the entire account!

In #AstrosCatfish - Part 2 I'll drag you through more mud and muck to try and decipher just who may have been behind the @texansbabe account all along. And why it's even more scandalous than it originally appeared!

Recapping #AstrosCatfish, Episode 2 - The Crawfish Boxes
The conclusion to my scintillating tale of how I uncovered a very strange fake Twitter account.