Let's take another look at what the Astros have done in relation to BABIP and xBABIP, since mid April, when they were mired in the middle of a terrible team-wide slump.

Share All sharing options for: xBABIP Predicts the Future, Astros have Exploded Offensively

Regression. It's happened in regards to BABIP, and man has it been fun to watch. Let's dig back in to this statistic that is not very well understood by most, but is very predictive of the baseball future. If you have no idea what BABIP is, check out this Fangraphs article, it explains it well.

The Shifts are Changing xBABIP and BABIP

The formula I use for xBABIP was created in mid 2012 using data from the 2009-2011 seasons. Defenses have changed dramatically from then via the major usage of the shift. The shift has seemed to cause a drop in BABIP overall. This fangraphs article explains it more. To compensate for this, I've subtracted .024 from all xBABIP's to account for the difference in league xBABIP and BABIP. I found this when the xBABIP formula gave a league xBABIP of .321, but the league's actual BABIP is .297.

The Astros' BABIP over Time this Season

You all remember April right? Back when the Astros offense was just truly awful. Well, things have gotten better, to say the least. I wrote this article on April 17, and it was timed at just about the rock bottom of the offensive performance. Since then, the Astros' team BABIP has been on the climb, and the offense exploded to go along with that. 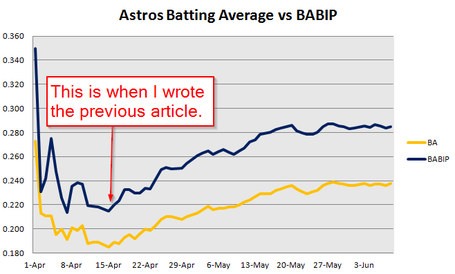 The Astros BABIP has seemed to level off to a sustainable level lately. This is very encouraging. Let's look a little more into some time segments this season.

The April BABIP was unsustainably low according to xBABIP, but May made up for that a little bit. In May, the Astros actually were "lucky" and outperformed their xBABIP. They have been outperforming their BABIP over the last 30 days also, but when it comes to the season, they still haven't caught up with the hole that was dug in April. What do we take from this table overall? The Astros offense is still due a little bit of positive regression, but not nearly as much as they were due 6 weeks ago.

Astros BABIP and xBABIP Difference vs the Rest of the MLB

What Astros are "Due?"

We always talk about someone being "due" for a hit. Jonathan Villar was due to get a hit after his 0 for forever streak. If Jose Altuve is 0-4 in a night coming to the plate, he's probably "due" for a hit. The great thing about xBABIP is that it tells us who is statistically "due," based on how the ball has come off of their bat so far this year. Here's the table: 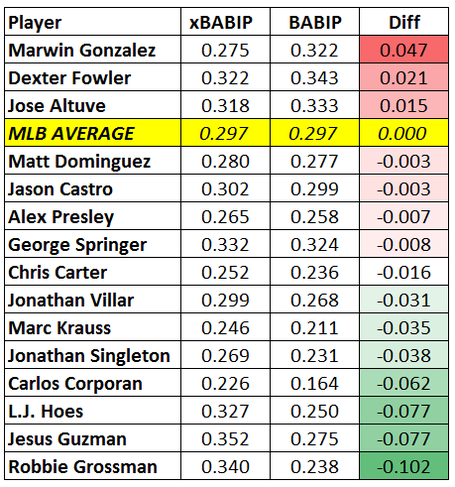 Marwin Gonzalez is due some regression, but it's not the good kind. His BABIP is higher than it should be, and we should expect it to drop. Dexter Fowler and Jose Aluve have been on such a torrid streak lately that it may be slightly unsustainable. Although, speedy players like Dexter and Jose can naturally carry high BABIPs.

Another observation from this is that many Astros are still due positive regression. Jon Singleton's numbers are still the "small sample size" phase, so take them with a grain of salt. Jonathan Villar's average is also bound to come up (this is why he needs to continue to get plate appearances).

The big one that sticks out to me is Robbie Grossman. I've been observing this for a while now. That is why when I made my one prediction in David Colemans' Fearless Predictions for June article, it was that Robbie Grossman would hit enough this month to make us think he could be the everyday left fielder. He's off to a good start doing just that. He's slashing .353/.450/.471 with a BABIP of .375 so far this month in 21 plate appearances. Will he sustain .375 for the rest of the season? No, that is extremely unlikely, but he was a career .350 BABIP guy in the minor leagues, and his career major league BABIP is .324 in 388 plate appearances. Grossman could put together a pretty solid slash line if he's given enough plate appearances and his BABIP normalizes.

There's still plenty to be pumped about when it comes to the Astros offensive production this year. What they've been doing lately seems to not be an aberration... it's just what they do... And that is exciting.

Disclaimer: These statistics are through the June 8th game vs Minnesota.