Cap It Off - MiLB.com is running a poll for the best minor league baseball cap, which you can vote on here.  As I write this, the Quad Cities River Bandits (HOU-A) are in third place. The Hooks (HOU-AA) are 62nd, the Jethawks (HOU-A+) at 85th, and the RedHawks (HOU-AAA) may or may not even be in the contest, as they don't show up on the "Full Lid Leaderboard." I will warn you, though: If you're anything like me, you could easily end up spending at least an hour on the site voting.

He Didn't Catch the Ball, Did He? - Speaking of MiLB.com and voting, this week's Plays of the Week involve one where Matt Duffy blasts a double to deep right center... that is, until it's caught by Midland's (OAK-AA) Chad Oberacker.

Oklahoma City RedHawks (AAA) - Jake Buchanan was on the mound against the Memphis Redbirds (STL), and the RedHawks' righty showed off his stuff, holding them scoreless and striking out five in seven innings, scattering five hits and walking none. In fact, relievers Rhiner Cruz, Kevin Chapman, and Josh Zeid would continue that trend, allowing a single baserunner between them and striking out two in two innings of work.

Special mention should go to Cruz, who has been known to struggle with walks in the past, but who has not allowed a free pass since April 20, when he gave up three in one inning of work. His walkless streak now includes six games, 7.2 innings, and ten strikeouts. Those three walks on April 20 were the only ones he's given up all season, and he now carries a 1.80 ERA and a 4-to-1 strikeout-to-walk ratio so far this year.

Chapman, meanwhile, threw just three pitches - all of them strikes - to retire the sole batter he faced (Oscar Taveras, MLB.com's #2 prospect, who represented the tying run at the time) on a strikeout.

The RedHawks' offense had just two baserunners in the first three innings, but in the fourth, they struck: Consecutive singles by Domingo Santana, Gregorio Petit, and Max Stassi were followed by a Kike Hernandez walk and another single by Carlos Perez before Andy Simunic hit into a double play. The two runs that crossed the plate in the inning were all the team needed, though, as they won 2-0.

Corpus Christi Hooks (AA) - Who remembers Josh Geer? In 2009, he became one of just two pitchers (the other was Andy Benes) to allow 25 or more home runs while pitching fewer than 110 innings. The former Padres' third-rounder is still hanging around the Padres organization, now playing in Double-A for San Antonio (SDP), and the Hooks offense teed off on him, putting up five runs in the bottom of the second inning and another three in the bottom of the eighth. Every Hooks hitter had at least one hit except for Jiovanni Mier, who has cooled off considerably since starting the season on a tear. Over his last ten games, the former first-round pick and Baseball America's pre-2010 #73 prospect, has hit just .237/.237/.289 - his sole extra-base hit during that time being a double on April 28.

Matthew Heidenreich and Brady Rodgers piggybacked to strike out eleven batters and walk just one over nine shutout innings. Rodgers, in particular, continues to show the same allergy to walks that prompted this: 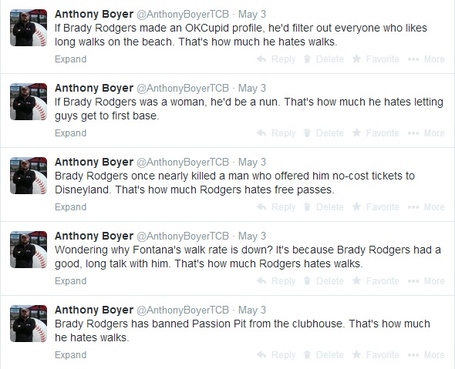 Meanwhile, Rodgers had six of the Hooks' eleven strikeouts, and now carries a tidy 31/5 K/BB ratio on the season, to go along with his 2.72 ERA. He earned the save in this game as the Hooks won, 8-0.

Lancaster Jethawks (A+) - Five doubles and a triple, but no home runs for the Jethawks offense as they squared off against a Lake Elsinore Storm (SDP) lineup that featured rehabbing major leaguers Carlos Quentin and Chase Headley, as well as 2013 first-rounder and Padres #5 prospect on MLB.com, Hunter Renfroe.Three of the extra-base hits came from the first two hitters in the order, Tony Kemp and Teoscar Hernandez.

It looked like a tough game for the Jethawks with Quentin and Headley in the opposing lineup and the Padres' #11 prospect Zach Eflin on the mound, but they they came out firing. A run in each of the first two innings, followed by three in the fourth, knocked Eflin out of the game. Meanwhile, despite not having his best start, Josh Hader was able to limit the damage, allowing two runs (both earned) on five hits and a walk, striking out three. Tandem-mate Chris Devenski polished off the game with four innings, striking out six and allowing just three hits, no runs, and no walks.

Also impressive is that two different Jethawks outfielders - Danry Vasquez and Ruben Sosa - were able to record outfield assists at second base. Amazingly, they both nailed the same runner, shortstop Diego Goris, who single-handedly accounted for four of the Storm's eight hits.

Headley and Quentin combined to go 1-for-5 with a walk and two strikeouts. Neither finished the game for the Storm, but Renfroe was able to put up Lake Elsinore's only runs of the game with a two-run shot off of Hader in the fourth inning. But the Jethawks won it easily, 7-2.

Quad Cities River Bandits (A) - After getting out of a jam in the top of the first inning, which saw the leadoff batter walk and advance as far as third base, Quad Cities' offense took over in the bottom of the frame. Leadoff hitter James Ramsay singled to start the game off, and was tripled home by Chan Moon, who himself was driven home by Jack Mayfield. A Chase McDonald single put runners on the corners for Ronnie Mitchell, who struck out swinging, but Tyler White was able to single Mayfield home, giving starter Jandel Gustave a 3-0 lead over the Cedar Rapids Kernels (MIN).

Cedar Rapids' Bryan Haar hit a solo shot off of Gustave in the second inning, but the River Bandits' offense went back to work in the bottom of the frame, putting up another five runs. The Kernels kept after it, putting up three more runs over the next two innings, but Quad Cities proved too much to handle, answering back with two more runs of their own en route to the 10-4 win. Every Quad Cities hitter had at least one hit, and five of them had more than one - led by White, who went 5-for-5 with a pair of doubles.

Another nice story in this one was Kevin Comer, who came out of the bullpen to throw three scoreless innings. Comer, perhaps best known as the Player To Be Named Later in the J.A. Happ trade with Toronto, has now thrown six scoreless innings on the season, allowing four hits and a walk to go along with three strikeouts.