Brett Oberholtzer throws seven masterful innings and Jonathan Villar bonks the winning double in a great pitcher's matchup on a night where MLB honored the breaking of the color barrier within baseball.

I am a white dude of German descent born during the advent of the Reagan administration. As such, I am clearly not the most qualified person to offer an opinion on the civil rights movement of the 1940’s through 60’s. However, as a baseball enthusiast tasked with recapping tonight’s "Civil Rights Game" being played between the Houston Astros and the Baltimore Orioles, I look forward to presenting you small bits of historical trivia relating to baseball’s role in making us a more accepting society.

Speaking of the 1940’s, tonight – for reasons best left unexplained – I find myself writing this recap on my Compaq Presario Univac laptop, complete with the 2002 version of Windows XP, 1.99 GHz of processor speed, and a whopping 512 KB of memory. Bear with me as I explore history on a piece of history.

Top: Oberholtzer gets three groundball outs in succession, but it requires some defensive heroics by Chris Carter, who ranged to his right to snag

Factoid: The Eagles moved to Houston after Jackie Robinson broke the color barrier in MLB. As popularity in segregated baseball waned, the Eagles decided to move to a more segregated town, Houston, to maintain interest in their club. They proved to find little audience and moved to New Orleans before finally disbanding. (http://www.tshaonline.org/handbook/online/articles/xoh06) note, this site has an advertisement proclaiming Free Obituary Searches. Sounds like a useful service.

Top: A foul ball caromed off the plate and hit Adam Jones. Hard. In…that place…where no man wants to be hit. There was a prolonged injury delay, causing fans to wonder if Jones put his stones on the line in order to throw Oberholtzer off his game. He then reached on a double. Now that’s dedication. He came around to score on an RBI liner by J.J. Hardy that flew through a hole in Matt Dominguez’ glove.

Factoid: Everybody knows who Jackie Robinson was. But during the same season, Larry Doby was the first black man to play in the American league. Doby was also the second black manager in baseball history, and curiously enough, when he signed with the Newark Eagles (later the Houston Eagles) of the Negro League, he used the pseudonym Larry Walker. Between stints in the 1940’s and the 1990’s Walker hit 636 home runs, making him the only player in history with over 600 home runs during a career that spanned sixty years. Oddly, some fans commented on the change of appearance between his first and second stints.

Bottom: Gonzalez gets an eventless 1-2-3 inning. Those are the kinds we don’t like.

Top: Oberholtzer gets an eventless 1-2-3 inning. Those are the kinds we like.

Factoid: Perhaps one of the greatest batters in Negro League history was Buck Leonard, known as "The Black Lou Gehrig". He finished his fifteen-year career with the Homestead Grays with a .320 batting average and a .527 slugging percentage. He averaged 27 recorded games per season during that time (stats keeping being sporadic). But prorating his stats to 140 games per season gives him a batting line of .320/.421/.527 with 1,794 runs scored, 1,402 RBI, 306 home runs, 127 stolen bases, and 1,310 walks.

Bottom: Though Jonathan Villar reaches base (for once) with two outs, Jose Altuve ends the inning on a sharply-hit grounder to second.

Top: Oberholtzer works around a base hit and ends the inning with a 4-6-3 double play, thanks to the defensive shift.

Factoid: Satchel Paige, unarguably the greatest Negro-League pitcher, dominated his league until age 42. At an age where modern pitchers are long-retired, Paige signed with the Cleveland Indians in 1948 and played in the major leagues until he was 46 years old, primarily as what passed as a "closer" in those days. Before he retired for good, he had reached two All-Star games, received MVP votes, and finished with a 3.29 ERA, 28 Wins, and 109 games finished.

Bottom: Castro hit by a pitch, then advances to second on a wild pitch. But Steve Pierce robs Matt Dominguez by diving to catch a liner in left field.

Top: For what it’s worth, Oberholtzer looks very good so far. His curveball seems to be working. After five innings, he has only thrown 57 pitches. No walks and only three hits. Of course, the Astros have mustered NO hits so far…

Bottom: And that’s five no-hit innings for Gonzalez, who is somehow doing this with no pitches that Fangraphs grades as better than average. I always get stuck recapping games like this.

Top: Another perfect inning for Oberholtzer. In the last start of his that I watched, he allowed like a zillion runs. This is much better.

Factoid: Courtesy of TCB reader thebluffrat, Hank Aaron carried a 10% strikeout rate during his record-shattering career. In 2014, only eight qualified batters currently have a strikeout rate under 10% for the season. Of those, only Victor Martinez’ .619 slugging percentage is higher than Aaron’s career rate.

Bottom: Altuve beat out a grounder by a hair! There went the no-hitter! Springer struck out, but he did hit the roof with a foul ball. Altuve stole his AL-leading 20th stolen base. He is on pace for 60, the most since Michael Bourn stole 61 in 2009. Before that? Eric Yelding in 1990.

Top: Chris Davis reaches on a single that might easily have been called an error. Dexter Fowler made a bad read on the bowl and couldn’t quite hang on to the ball at his shoelaces. But the issue is resolved with a shallow fly to second. Oberholtzer is now at 80 pitches through seven. Fourteen ground outs so far.

Factoid: In sixteen seasons with the Homestead Grays and the Pittsburgh Crawfords, Josh Gibson, a catcher, had the strongest argument for "better Negro League batter than Buck Leonard" Gibson was credited with over 800 home runs during his career, during which he hit .350/.401/.624! Those home runs were all hit before age 35, when he passed away from a stroke, just three months before Robinson joined the Brooklyn Dodgers. By age 35, Babe Ruth had hit but 516 of his eventual 714 home runs.

Bottom: Leadoff double for Dominguez, followed by an advance to third by Alex Presley, who got thrown out at second in what can only be explained as a 9-2-5 out. But then Robbie Grossman plated Dominguez with a double, tying the game. Then, Villar snapped his 0-26 schneid by stroking a ground-rule double to right field, putting the good guys in the lead! 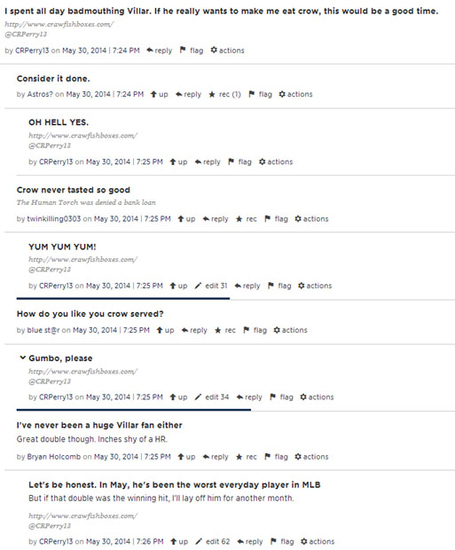 Top: Weirdly, Farnsworth is brought in to pitch the 8th, despite Oberholtzer being at only 80 pitches. And when I say "brought on to pitch", I actually meant "to get two outs, then get replaced by Sipp, who gives up an unlucky grounder, then got replaced by Qualls, who got the final out with two pitches."

Top: Qualls blows away the Orioles in order, needing only ten pitches. The game ends on a strikeout looking by Chris Davis.

Factoid: The Astros and MLB did a really great job presenting the history of the civil rights movement within baseball on the broadcast tonight. Kudos to everybody involved.

This game ended up a great pitcher’s duel between two unlikely candidates. When the dust settled, the Astros had won the game by a score of 2-1, with Jonathan Villar providing the winning hit, forcing me to eat a substantial amount of crow after speaking quite poorly of him earlier in the day. I’ll accept that, and now I must be nice.