On the Astros: Beating a dead horse, or how much money talks

What's the only reason that Jim Crane could grow disenchanted with Jeff Luhnow's regime?

Share All sharing options for: On the Astros: Beating a dead horse, or how much money talks

Let's tackle two things at once with this column. Allow me to explore some of the more hotly-contested topics on the site: the front office. Amid all the name-calling over the past month by frustrated parties on both sides of this imaginary fan line, there have been some great points made. It's kept my mind working on the problem.

Am I defending a front office for the wrong reasons? Why am I doing it?

That's what we'll tackle first, but I'd also like to finish by getting into whether this FO is really in trouble and what it would take for them to lose their jobs. There is one, and only one, reason I came up with, but we'll get back to that in a bit.

When I was growing up, the sports section of the Chronicle was a gold mine. It was the only place I could go for information each day. Sure, there was the continual loop of SportsCenter on ESPN in the mornings, but they didn't show me a box score or have notes right beside it about the Astros.

Brooks takes a look at pitching terms, mechanics and more in a great series.

That was why I couldn't wait until my dad was finished with the sports page each morning. After going to college, I started reading more on the internet. I developed a Bill Simmons addiction in addition to catching up on some new ideas in baseball through Rob Neyer. Then, Moneyball came out and transformed the way I viewed players and the draft.

Since then, I've tried to read as much as I can on the ways we can interpret the game through the numbers at hand. It's helped me develop a lens through which I can better view the nuances of the game. I can answer some of the questions about why Collin McHugh suddenly became more effective. I can better predict whether the Astros will play better in the future, thanks to run differentials and balls in play.

That's what drove me so crazy about the Purpura/Wade front offices.  They did things consistently that disagreed with how I perceived baseball to function. OF COURSE Pedro Feliz wouldn't hit 20 home runs magically just because of the Crawford Boxes. Here's a spray chart of his last two years to show you why.

With this new front office, though, things are different. I don't agree with their moves because I'm invested in their success. Much as I appreciate Mike Fast stopping by in the comments or the Astros hosting a Blogger Night, I'm not going to pander. I'll only do that for you, dear readers, and for George Springer because he's awesome.

The reason I agree with most of this front office's moves is that they fit my conception of how the game works. I get it, because that's how I get baseball.

That's also why many of us don't see eye to eye on the job the front office is doing. It's about perception.

Whether you or I or local baseball writers like the job the front office is doing is irrelevant. It doesn't matter how many times you use the #LoseNow hashtag. Only Jim Crane's opinion matters in this area.

So, what are the chances Crane cuts bait with this front office after the season? What if he's super upset that Houston didn't get to .500? Would he fire Luhnow? 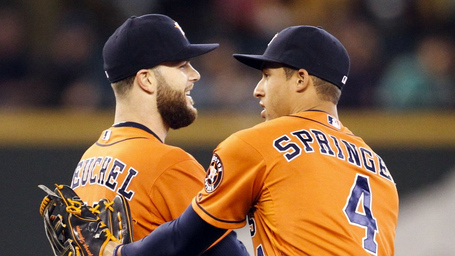 It wasn't three years ago that Crane gave Luhnow a literal blank page, telling him to do what he needed to overhaul the team. We don't know what was said in those meetings. All we've gotten are anecdotes after the fact. But, i can guarantee that if Luhnow told Crane that the Astros would be .500 by Luhnow's third year on the job, I'd be advocating for him to lose his job. Because he'd have been clearly insane.

The Astros were bad back then, but it's difficult to see just how bad. The farm was barren at the upper levels and bereft of talent on the major league roster. To build through free agency to get to .500 would have meant spending tens of millions of dollars, if not getting up into hundreds of millions.

That last sentence also gets to the only reason Crane may waver from his blank page Plan for Luhnow. The only reason I see Crane cleaning house would be money.

It would also be a mistake.

We know CSN Houston is bankrupt. We know those proceedings are not going well. We also know that attendance has fallen from the halcyon first years of MMP. Any budget Crane developed back in 2012 when he was still getting TV rights money must have been busted three or four times.

The only reason I see Crane cleaning house would be money. It would also be a mistake.

That's the only reason I see a change happening this year. No matter how bad they get, money's the only thing that can talk this early in the process. The reason it'd be a mistake is simple. If you're afraid of the Astros becoming the Pirates or the Royals, you should be terrified of more front office change. Houston already has gone through three GMs in the past seven years. A hallmark of terrible organizations is flux at the top of baseball operations.

That doesn't mean great teams have stable front office situations. Look across the field to see GMDM for an example of why that may not work either. But, stability there gives the team a much better chance to succeed.

The reason I'm not more critical of the front office isn't because I'm super in love with them. It's that the moves they've made fit with my view of the game.

Not everyone shares these views. That's okay.

The only reason Jim Crane could get rid of the front office after this year is money.

He probably shouldn't do that.

In the end, we all want to see the Astros improve. We want to see winning baseball again. We want them to get back to the World Series. It's easy to forget that, but we're all rooting for the same thing.