Subber10 dives into the second half of the pitching primer to explain some pitching tools and philosophy behind pitching.

Plain and simple, this is where a pitcher releases the ball. Doesn't sound complicated. But, it's a subject. A consistent release point is important for two reasons.

1. It's more difficult for a hitter to pick up the pitch when all the pitches are released from the same point. This is tied into arm slots. A pitcher will sometimes come a little higher to release the curve ball so they can be a little more on top of the pitch. A pitcher will sometimes drop their arm slot for the slider to get more horizontal movement. A ground ball pitcher might do the same with a fastball to get a little more on top of the pitch.

Those subtle differences can allow a hitter slightly extra time to make a decision on whether to swing or not. I'll argue that this isn't a huge issue, and differences in results are likely subtle.

2. A consistent release point indicates repeatability of mechanics and better control. It's difficult to locate a pitch consistently when you have varying arm slots and timing of different segments of the body. It's a good correlation that pitchers with good control have tight groupings of release points while pitchers who struggle with control have a wider grouping. 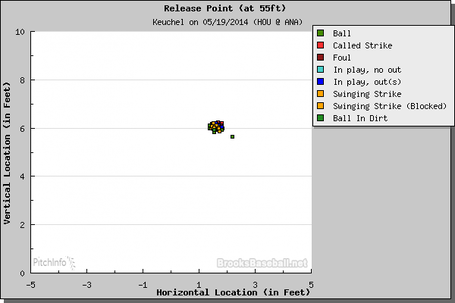 Release points also have other importance. The distance from the plate is important. A pitcher with a longer stride releases the ball closer to the plate. We always think of velocity as velocity. But, why is velocity not created equal?

A long striding pitcher with 92 MPH fastball may actually be perceived as 93-94 MPH to the hitter, making the pitch play up.

Other aspects affect this as well. A pitcher who "opens up" too early, or rotate their lead shoulder early, will pull their arm around sooner and not get the trunk flexion needed to get a release point closer to the plate. This is one of the issues Rhiner Cruz has struggled with. His mid-90's velocity at times played a few ticks slower.

Another is a high arm slot. A high arm slot increases the distance to the plate because of the angle. That makes velocity play slower than it really is.

That leads us into downward plane that you've read about so many times. A high arm slot increases the angle at which a pitch comes in at and harder to square up. That is what has lead to the de-valuing of a diminutive pitchers who just are too short to create a downward angle. Yet, why do some have success?

Time to plate is more important than the angle. There was a study (sorry, can't find the link) showing that the higher release point made minimal change in the actual angle. When you factor in that the release point is over 50 feet from the plate, the change in angle is not significant by raising a release point just a few inches. It's simple geometry. In a vacuum, a higher angle is great. However, in the grand scheme it's less significant.

This is a little bit newer to me. It's not a new one. But, has gotten a lot more attention recently.  It's a reference to the trajectory of pitches for the first several feet before they "break".

The most basic example is one we all are aware of, just don't recognize it under this terminology.  A fastball and change up look the same early except for the change up has slightly different downward movement and a large change in velocity. Since they look the same, are thrown from the same release point, they are in the same tunnel from the hitters point of view.

This is why many pitchers like to have two variations of their fastball. They are the exact same except for slightly different movement late.

This signifies that a hitter has to wait longer before recognizing the pitch and thus is harder to hit.  You have probably heard scouts or articles talking about how a slider plays off the fastball well because it looks like a fastball until breaks. Same thing.

Where this becomes very important, is for the curveball.  The curveball looks very different out of the hand because it's much slower, sometimes has a little early "hump" to it, and has to be thrown higher because of it's large drop.  If a hitter can recognize it every time, it becomes less effective on average because hitters will tend to lay off of it.

So, how is the pitch "protected"? A high 4-seam fastball. A high fastball will be in the same tunnel as a curve and make a hitter wait to recognize the difference.  Add in that there's usually about at least a foot difference in the two pitches movement patterns in the vertical plane, that's hard to adjust to. This is likely the reason Collin McHugh dropped the 2-seam in favor of a 4-seam fastball since he has a plus curveball.

You can see how the curve and the 4-seam fastball for the first few feet have the same trajectory before the curve breaks down. These are consecutive pitches in the at-bat as well. So you can really see how that can throw a hitter off when he see a pitch come out of the same tunnel as the previous pitch and then end up over two feet below.

We discussed effective velocity in terms of time to plate. This is slightly different. This is something that has been discovered by Perry Husbands of Hitting Is a Guess, in his attempt to find the best approach for hitters. What he found was a statistical data that can make hitting very difficult.

A 90 MPH pitch has a different perceived velocity by the hitter based on the location of the pitch. 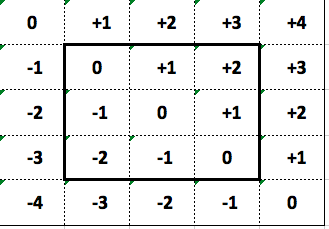 But, what do you do with this information and how does it formulate pitch selection?

However, a fastball down and away would have been 88 MPH and a change up following that fastball and located in, would be 86 and would have a higher likelihood of being hit hard.

The previous pitch is the only pitch that needs to be factored in.

I am not Mike Fast.

However, I will attempt to explain some basics.

Pitch f/x uses cameras to measure movement, speed, spin, release points, and location of each and every pitch.  It is the most complete and accurate measure of pitches that are available to us. I use BrooksBaseball.net for all the data.

4-Seam FB: A good pitch will have around 10 inches of positive vertical movement in order to create whiffs and will usually have some horizontal movement. The vertical aspect is more important for a 4-seam FB.

Slider: Sliders will either have some negative vertical movement (-2-0) or little positive (0-1). Their characteristic is the greater horizontal movement, positive for RHP and negative LHP. Some of the measurement will be similar to cutters, just a little more pronounced.

Curveball: Curves have some horizontal movement, dependent on the shape of the pitch. The big characteristic is the negative vertical movement, which is usually between -4 and -12.

There are complex algorithms that differentiate what each pitch is and dependent on more than the movement. Velocity, spin angle, and spin rate are factored in this. So, that is why there is some movement overlap between curves and cutters, and 4-seam vs 2-seam fastballs.