Subber10 attempts to explain some pitching mechanics in a two part series about pitching.

Pitching mechanics are complex. They aren't easy to understand. I don't understand half of what I want to understand. They can't be fully explained in a simple post. Pitching experts have attempted to do so with books, and even then, everything isn't explained.

Part of that is that so much of it is yet to be understood. We learn more about pitching regularly, yet it's still heavily misunderstood, misused and abused, and at time flat out ignored.

I've received several requests for articles discussing pitching, and now I'm finally going to dive into it some. In all honestly, I don't do the subject justice.

Tall and Fall: Means exactly how it's called. The pitcher stays tall during his leg lift and falls to the plate. This style promotes a lot of balance throughout the delivery.

J.A. Happ has some bend to that back knee, but most of his momentum forward is generated from "falling" to the plate.

Drop and Drive (also seen referred to as Dip and Drive): These pitchers drop their weight during the leg lift by bending their back leg to "drop". This allows the pitcher to drive off of his back leg to create momentum during the delivery.

Josh Fields has a pronounced "drop and drive" to his delivery.

In reality, pitchers utilize both styles to some extent. There are ways that you can improve balance with the drop and drive and there are ways to improve momentum with the tall and fall style. Happ is a good example of how all pitchers have some drive from the back leg, it's just not as pronounced as Fields.

Which leads to the next point, momentum. There are probably some that will even argue the semantics of the use the word "momentum." But, for the purpose of this article, I'm going to use it. Momentum is the force carrying the pitcher to the plate, whether it's through the pitcher pushing off the rubber or falling toward home plate. That force is carried up the mechanical chain of the body to the next segment until it reaches the release point. Each segment builds on the previous segment.

There are many tricks to add momentum. However, the difficult part is being able to get the momentum to build on the previous segment. Tim Lincecum is the poster boy for using these tricks and syncing them to create plus velocity from a small frame.

Momentum is great, if you are able to maintain good balance with it. For you prospect guys, Brody Colvin is a good example. Over the past few seasons, he has transitioned into dropping and driving with his back leg more and his results have suffered because he is unable to balance his delivery. If you can't balance and time your delivery, you arm slot varies and your control suffers.

Over-the-top: This is basically a guy who bends away from his pitching side as he goes through his delivery. Tim Lincecum does this as well.  Despite having his arm approximately 90 degrees away elevated to the side, his arm goes up over his head because of how he bends away. This helps to artificially create a higher release point to make a better downhill plane for their fastball to be on. This creates more risk for back injuries and typically is harder on the shoulder than other styles.

3/4's: By far the most common. There's some side-bending of the trunk, but not as much as over-the-top pitchers, but they aren't straight up. This is usually the least risky for pitchers. Less back and shoulder stress than over-the-top in general. Safer on the elbow than side-arm. This is usually more natural feeling for the majority of pitchers.

Sidearm: No tilting of the trunk and the arm stays at around 90 degrees elevated to the side, just like the others. Pitchers tend to get rotational with this delivery and creates more stress on the elbow. Safer on backs and shoulders. This is harder to get momentum and velocity from though and can be difficult to control some pitches from this slot.

Submarine: Do I have to talk about this funk? It's real. It's rare. These guys side bend to the pitching arm side. It's funky and kills velocity but is difficult to hit because of the strange arm slot.

Yep, there's phases to a delivery.

Wind-Up: This involves the initial set-up movement. This is the the lead leg lift and initial movement to the plate.

Early Cocking: This is from the hand break (when the pitching hand separates from the glove) to the when the foot lead foot strikes. This is where most pitchers will create "scapular loading" or what is really just scapular retraction and horizontal abduction of the arm. That's pulling the shoulder blade back and the upper arm back behind you.

Late Cocking: This is where the pitcher starts to rotate to the plate and the arm starts coming forward while the forearm lays back into external rotation. You know, when the arm hand is rotated behind your body and you sit there and think that there's no way you can get your arm rotated that far back. Yeah, that uncomfortable looking position. This is considered the most violent phase of pitching by most.

Acceleration: Here the arm accelerates from that uncomfortable external rotation into the release point. This is time when all the force from the rest of the body should be going into the arm for release of the ball.

Deceleration: The most commonly overlooked aspect of a delivery. This is from the release point to the end. Also called the follow through. It's also a very violent phase as the arm has to be slowed down efficiently without causing damage, which is often not the case. Very stressful on the posterior shoulder.

Maximum knee height: Elite pitchers are at 60-70% of their height 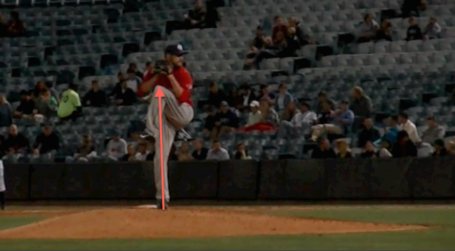 Stride Length: Elite pitchers have a stride that measures 75-90% of their height.

Shoulder Abduction at foot contact: Elite pitchers are at 80-100 degrees of shoulder abduction. 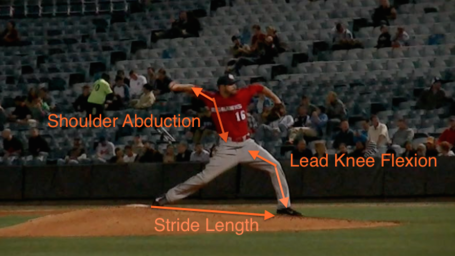 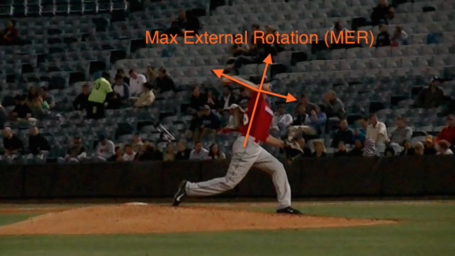 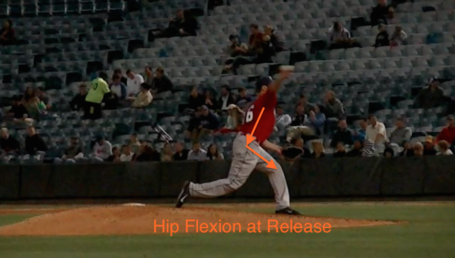 Issues concerning these measurements will be discussed with each pitcher mechanical breakdown.