Astros 2Bs Jose Altuve and Tony Kemp's successes at their relative leagues forces CRPerry13 to question the idea that shorter batters are at a disadvantage compared to their larger brethren.

This weekend, the Astros played the White Sox here in Houston, and the most gripping story line was not the games themselves.  No, the real news was the real-life David-versus-Goliath we all witnessed on the field.

But that got me thinking.  Do pitchers hate pitching to Altuve?  I would, and it's not because of his nearly-league-leading 90% contact rate.

The STRIKE ZONE is that area over home plate the upper limit of which is a horizontal line at the midpoint between the top of the shoulders and the top of the uniform pants, and the lower level is a line at the hollow beneath the kneecap. The Strike Zone shall be determined from the batter's stance as the batter is prepared to swing at a pitched ball.

So, the height of the strike zone is different for every batter and for every different batting stance.  I'd hate to be an umpire, but I'd hate to be a pitcher even more.  We talk about command and control, but how can pitchers command pitches when the upper and lower boundaries of the strike zone change on every single batter? Throw a rising fastball at the top of the zone to generate a pop up?  OK, but that's a different location than it was for the previous batter.  So much for muscle memory.

The Astros also have a tall guy or two on their roster, and so for this exercise I'll be using Altuve and Dexter Fowler (6' 4") to illustrate the challenges presented to a pitcher when hurling yarn to short batters.  Look at the real-life difference between Altuve's and Fowler's strike zones, as defined by MLB. 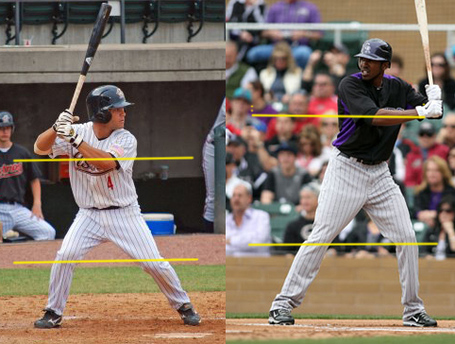 Pitch F/X cameras define the strike zone for each pitch that is thrown to a player, and over the course of a season, one can determine the average strike zone value.  Pitch F/X's strike zones are not based on called balls and strikes by the umpires, but rather determination of the actual strike zone under MLB's rules.

It seems that umpires (all of which whom are much taller than Altuve, I bet) have difficulty judging the upper and lower limits of Altuve's zone, however.  This probably has to do with their vantage as compared to batters who are more of a size with themselves.  The perception, because the umpire is "looking down" on Altuve, is that the strike zone is actually taller than it is, by the rules. 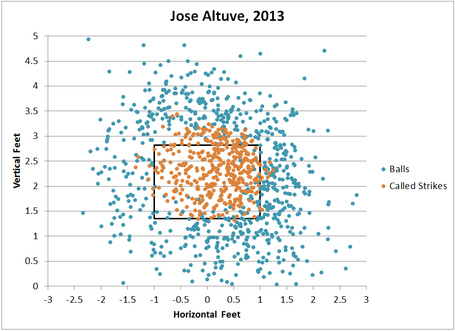 While this is a little annoying, from the perspective of one who wishes against all reasonable expectation that the umpires could call balls and strikes perfectly, the reality is that the shortened zone is actually in Altuve's favor.  Just as it is more difficult for a pitcher to throw with accuracy into a smaller space than a larger space, it is easier for a batter to control the bat in a smaller space than in a larger one.  The difference between swinging at a higher pitch or a lower pitch is much smaller than with a taller player, and so his body has a smaller area in which to develop its muscle memory.  While not the only factor, the size of the zone in which he has to swing probably helps him achieve that 95% in-zone contact rate.

With Fowler, there is no such difficultly for the umpires, and so his called strikes are generally around the correctly-defined zone. 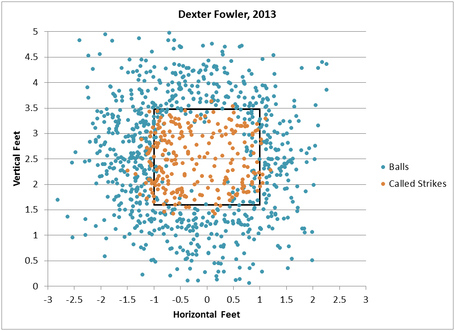 To illustrate the difficulty pitchers have when facing short guys, here are Fowler's called strikes and balls superimposed on Jose Altuve's strike zone: 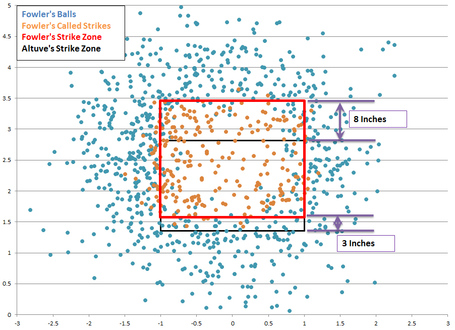 And again, here are all of the pitches thrown to Dexter Fowler in 2013, shown on top of Jose Altuve's strike zone: 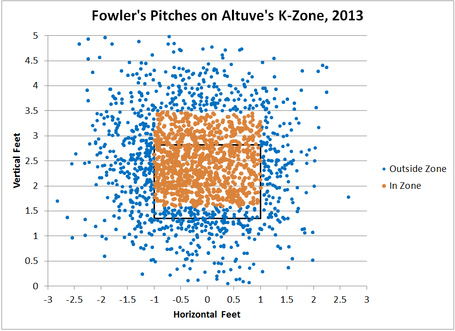 If I'm a pitcher, I'm annoyed at how small Altuve's strike zone is.  It must be incredibly challenging to work within that small space and not give him a pitch that he can drive with authority.  If you look at the actual number of pitches thrown to Folwer that would have been in Altuve's zone, you see that 10% of the pitches in the zone to Fowler would have been outside the zone to Altuve.  So for every 1000 pitches, 100 of them would be strikes to Fowler and balls to Altuve.  Pitchers, tear your hair out. 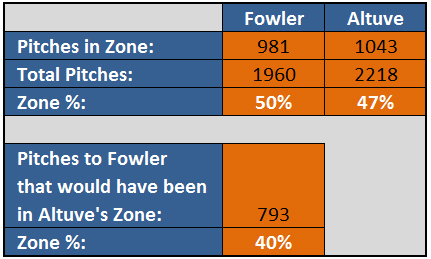 This is doubly relevant to the Minor Leagues.  The quality of pitching between the major and minor leagues is almost incalculably different.  Pitchers are in the minor leagues for two reasons: A) they aren't good enough to play in the majors, and B) they are working to correct their flaws.  Most often, the flaw the pitcher is working to correct is his ability to command one or more of his pitches and throw them for strikes.  So inherently, the minor leagues is flooded with pitchers who have trouble reaching the strike zone, and are actively working on their worst pitches to develop the muscle memory to correct this.  Since the strike zone size in the minors is defined exactly the same as in the majors, this makes throwing strikes to a short player even more difficult than in the majors, due to the pitcher's comparable lack of command.

During five seasons in the minors, Altuve hit .327/.386/.481 with a 8% walk rate.  Pitchers struggled with their command, and he punished them with walks and line drives.  In the majors, Altuve is still an excellent hitter, but the improvement in pitcher ability has led to .286/.326/.381 with a 6% walk rate.  It's still tough on the pitchers, but they are more up to the challenge.

So have the Astros identified "short batters" as a market inefficiency?  It's easy to say that it seems so, though it's probably more likely to say that the Astros are less dismissive of shorter-stature batters who have proven abilities to play baseball.  In 2013, they drafted Vanderbilt second baseman Anthony Kemp (5' 6") in the fifth round.  They acquired 5' 10" Ronald Torreyes in trade from the Cubs (who is not short by society standards, but certainly is by baseball ones).  They signed outfielder Leo Heras (5' 9") out of the Mexican League.  They acquired outfielder D'Andre Toney (5' 8") from the Royals in 2012.

Are short batters a new market inefficiency?  Probably not.  But there is strong reason to ignore old-school scouts who dismiss the shorter guys as being without a "baseball body", because if the guy has the ability to make good contact and exhibits good plate discipline, then his stature might actually be an asset, not a detraction.