'I Told You So': Dallas Keuchel and his pitch selection

Since he won't say it, I will for him.

Share All sharing options for: 'I Told You So': Dallas Keuchel and his pitch selection

CRPerry13 is a great guy. He really is. He genuinely cares about the Astros and everyone involved with this website. If you don't believe me, then read this.

He may get a little sarcastic in the comments section occasionally, but he usually keeps his gloating to the TCB writers e-mail thread. (I'm kidding, Chris would never brag.)

But right now he certainly could walk with his Astros blogger head high and chest out with the way Dallas Keuchel is pitching right now. Why? Because Chris told you so.

Once in November. And if you weren't really paying attention then, he came back spittin' more truth on April 18th.

Now Keuchel is the Astros ace and has become one of MLB's best starters. He currently is 24th in the Majors with a 3.02 FIP. Even more impressive is Keuchel's xFIP of 2.82, good for 13th in MLB.

A key to Keuchel's success has been the improvement in his breaking pitch. I call it a breaking pitch because it's not a curveball and it's not really a slider either. It's a slurve (thanks to Clack for pointing that out to me).

But the interesting thing about this slurve is that it was recognized by Brooks Baseball as a curveball in the early stages of Keuchel's career, but now is called a slider. And since it's become a slider, especially so far this year, Keuchel has gotten many more swings and misses.

Fangraphs' Eno Sarris had a short and sweet description of Keuchel's slider a few weeks ago that profiled the success Keuchy has had with the pitch. Keuchel has always had a solid changeup. It was what he leaned on earlier in his career. Without a decent third pitch to play alongside the lefty's changeup and sinker, Keuchel struggled big time, especially against right-handed batters. 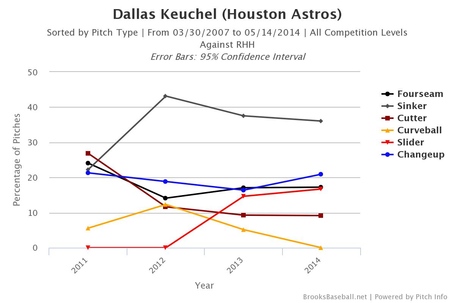 Keuchel continues to depend more and more on his offspeed deliveries and actually throws the changeup more now that the threat of the slider (or slurve) looms.

And check out the swing and miss percentages vs. both lefties and righties (better known as whiff). 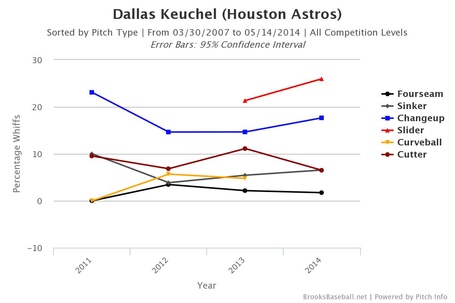 Yeah, that slider is doing pretty well at a 25.97 whiff percentage.

Surely teams will adjust, and Keuchel will have to as well. But right now he's got himself in a three-pitch groove that would keep him at the top of the Astros rotation for a while.

Oh, and Chris told you so.