How bad is Lucas Harrell? Who are the first two guys off the 40-man? Carlos Correa!

Once again, we're dusting off the old mailbag to answer some reader questions we didn't have time for on the podcast. If you want to submit a question, you can ask us on Twitter @CrawfishBoxes, drop the question in our live podcast threads each Sunday night or shoot us an email at m.david.colemanATgmail.com.

Thanks to everyone who submitted questions this week.

It's kind of shocking how fast Harrell has swung from a guy who's trade value was neck-and-neck with Bud Norris, to a guy who most fans would happily see booted off the roster.

Make no mistake, he's also probably the guy on this roster who's most tenuously holding onto a roster spot. Still, it's jarring to see a guy go into the free fall that Harrell has gone through.

His first start wasn't great, either, as Harrell got bombed by the Angels for five runs and seven hits in three innings. Control was once again his undoing, as Harrell walked three while striking out three in those innings. He also only threw 38 of his 76 pitches for strikes.

As his control problems worsened, batters simply weren't swinging as much as they were in his excellent 2012. As they swing less, he either walks more hitters or has to find more of the plate, leading to harder contact, which is why his line drive rate rose slightly last season and was a whopping 39 percent in that first start.

Harrell still has time to reverse course. Strom could work nicely with the right-hander and turn him around. Anything's possible. But, unless Harrell can start throwing more quality strikes, his time in the rotation is likely short.

I like this one. Figuring out who the 40-man is on the roster is a pretty good exercise. Same for the 25-man. We already know that Chia-Jen Lo was the 40th guy, since he was just taken off of it. That leaves one more spot to figure out there.

What's the most fungible asset on a roster? Relievers. So, that narrows down our focus. A close second is infielders who can't hit, but Houston's depth is so thin at middle infield, I doubt they get rid of any infielders from the 40-man.

Which relievers, then, are at the bottom of the pile. Considering Houston only has one lefty in the big-league bullpen, it's safe to assume they're not getting rid of more. Who would they replace Chapman with in case of an injury? No to Darin Downs and Luis Cruz, then.

Then, it's down to the right-handed relievers, like Jose Cisnero, Paul Clemens, David Martinez and Josh Zeid. We know that Zeid isn't that elusive 39th man, since he just got called up to replace Matt Albers. Clemens is being stretched out into a starter, so I doubt they consider him the 39th man, which leaves Jose Cisnero and David Martinez.

The tiebreaker here is tough. Both had moments in the majors last season, but neither pitched terribly well. If we're evaluating how the Astros view them, we may have to go back to this spring to see who got cut from big league camp first. Martinez went in the second round of cuts on March 10, while Cisnero lasted until March 16.

It may not be much, but it's enough to make Martinez my vote as the 39th man.

As for the 25-man roster, I'd say the final two guys are the relievers. Well, after Lucas Harrell, who could just be keeping Brad Peacock's rotation spot warm. Let's say he's one of the two. Who's the next guy who goes when, say, Jesse Crain is healthy?

I know I just said that relievers are fungible, but we also know the Astros aren't afraid of having 13 pitchers on the roster. That's why I lean toward Marc Krauss as the next guy on the 25-man chopping block. Jesus Guzman is playing well enough that he may not need a strict platoon mate. Sure, regression waits for no ballplayer, but the Astros seem confident enough in him to not need a caddy.

Krauss, after a hot spring, has cooled off considerably. Sample sizes and all, but what we've seen from Krauss also is what he showed in limited time last season. Maybe it's all a mental thing, as he suggested to the Chronicle yesterday.

But, he's probably the weakest link on the position player side. Alex Presley's addition gives Houston another outfielder and Jesus Guzman's ability to play left field also duplicates Krauss' value. If we're picking a 23rd guy on the roster, it's probably him.

That being said? Yowza.

The precocious shortstop has done just about everything correctly in his five games for Lancaster. Correa is hitting .471/.545/.706 this season with a home run, four runs scored, eight RBIs a weighted On-Base Average of .540 and a weighted Runs Created+ of 246. He's already walked three times and hasn't struck out once in 22 plate appearances.

The only thing we can really take away from this is to be impressed. It's too early to tell how long Correa will be in Lancaster, but the rumor is he's only there for a month. Certainly, his hot start to the season could justify that. For now, let's just enjoy what Correa can do. 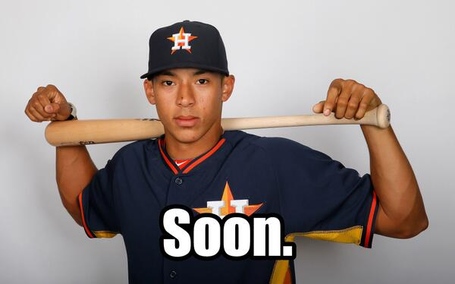