Some things to talk about while I wonder if Derek Jeter spent last night wearing his new boots and crying alone in the dark...

Houston's Eater page has a new post dedicated to the new and improved eats at Minute Maid Park. I gotta tell ya, some of these sound pretty sweet. For instance, take the new BBQ place, Texas Smoke:

Texas Smoke: Long-time Astros supporter Bryan Caswell is teaming up with smoked meats guru Ronnie Killen to offer baseball fans some of the highly coveted brisket that sells out daily at Killen's newly opened Pearland restaurant. Killen will be sending over warm brisket before each game rather than reheating it on the spot. Loaded baked potatoes and the traditional 'cue sides will also be available. This stand will offer locals a preview of the food that will be served at Killen and Caswell's upcoming establishment Montrose Meat Co. [Section 124]

I may not eat anywhere else in the park. That sounds amazing, getting brisket trucked in from Killen's? Yes, please. Also, the rest of the upgrades sound promising, including the new Nolan Ryan hamburgers and the "extreme" hot dogs. Anyone tried the new food at MMP yet? Any reviews?

This seems important, especially after his standout performance Wednesday against the Yankees. Apparently, one of the tweaks Brent Strom has made with Jarred Cosart is to drop his hands. That had a profound effect on his control, as the fireballer didn't walk a batter for the first time in his major league career last night. What exactly are the changes? From Evan Drellich's story:

Those changes seem to have improved Cosart's curve, which Tyler Stafford previewed here. What's more, Cosart felt comfortable enough to throw the new yakker multiple times with full counts last night. If he can improve his breaking pitch and couple that with his heavy 95 mph heater, Cosart is in for more non-regressed success.

Can we also start saying that Brent Strom is making an immediate impact on this Astros pitching staff? Is there any way Brocail makes those adjustments, or talks about it that way?

3) Fowler does his teammates a solid

Dexter Fowler left Colorado with a bad rap. His GM basically said he wasn't hard enough to play winning baseball, which is bunk, but whatever. But, those comments also would lead you to believe Fowler may not be the best teammate.

Not so fast, my friend. See, Fowler got his teammates a little something for Opening Day: 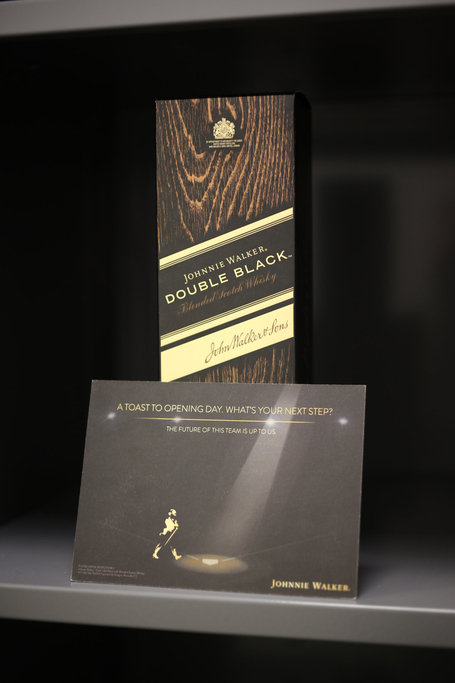 Houston Astros center fielder Dexter Fowler toasted the occasion by gifting his teammates on Opening Day with Johnnie Walker, a brand that stands for personal progress. Each player received a bottle of Johnnie Walker Double Black accompanied by a personal note that read: "The future of the team is up to us. Thank you for welcoming me to Houston. Cheers to our next steps together. Keep Walking."

Here's the quote from Fowler about it:

"Opening Day presents not only a new start for me, but a fresh slate for my teammates and the entire Houston Astro organization. At this moment, the past is the past. It's the next practice, the next swing, the next run that matters. I gifted my new teammates a bottle of Johnnie Walker Double Black to celebrate this moment, the opportunity to define ourselves by where we are headed, not where we stand."