A Few Thoughts on Collin McHugh and His Electric Start

Collin McHugh is no stranger to hot starts, nor to regression. And a look at his own blog can shed a lot of light on why that is.

Share All sharing options for: A Few Thoughts on Collin McHugh and His Electric Start

When the Astros claimed Collin McHugh off of waivers from the Colorado Rockies, I may have been the most ecstatic - but even that wasn't saying much. Here are some snippets from the TCB writers' emails:

CRPerry13
AAA depth.  I think the Astros might have an innings count problem.  Cosart, Obie, Bass, Keuchel, Clemens, Wojo all threw less than 150 innings last year.  Depth at the SP position in AAA and MLB is probably a concern. McHugh helps, though he looks like an MLB spot-starter at best.

David Coleman
I think the Astros think they can fix him with pitch sequencing and getting him to lessen his reliance on his fastball to put more emphasis on his two-seamer. Drop his slider obsession and have him throw more changes, they might have a decent swingman to back up Bass.

But, I totally agree this is a depth move. McHugh will start the season in Triple-A if they can put him there.

Anthony Boyer
At one time, he was near the end of a long list of Mets pitching prospects, most of whom overshadowed him by a significant amount.

He walks more people than you'd like, but his strikeout numbers are good. Probably destined for the bullpen after Steve Webber sprinkles him with pixie dust.

My comment in the Crawfish Boxes article about his acquisition was even fainter praise:

Shucks, Anthony. Try not to gush or anything.

I had been aware of Collin while he was in the Mets system, but what really brought me onboard with him was learning about his blog. We've talked about it again and again, so bear with me, but I'm just always impressed by players who share their experiences with the fans.

Since making his debut with the Astros, McHugh has snapped off two very good starts against Seattle and Oakland.

Amazing. Electric. But if, like me, you're wondering why he hasn't been in the spotlight more with that great start, it's that very same blog that may provide some answers.

Last night, I went back and re-read every article in McHugh's blog. It's amazing what a little perspective can do to change the way you interpret a piece of writing.

Life is never easy when it's lived in the spotlight. Everyday, athletes including myself, do our jobs in front of thousands and sometimes, in Sherman's case, millions of people. It's hard knowing that all of those fans you play in front of seem to have a vested interest in the outcome of your career, even if in reality, the outcome of each game has no real effect on them.

Before the world of social media, athletes could step off of the playing surface and step away from the cheering or booing. Perhaps the sting or elation of the outcome was still as pungent as it is now, but the analysis of how the individual played/acted was limited to the papers, and much later, programs like SportsCenter.

The second, "Good But Not Good Enough," is more introspective, and really very telling about how cruel the game of baseball can be when people who have always been among the best of their peers at baseball get to the major leagues and face the final test:

We live in this weird baseball Limbo where it seems like I've always been just good enough to get us to over the hump to the next level. But now there is this new hump, a new "good enough", called the big leagues that I can't seem to live up to. My minor league numbers are pretty darn good, no matter who you compare them to. I've had my ups and downs through the levels, but at the end of the day I was decent enough to make it to the big leagues with 2 different teams. My big league numbers, however, are mediocre at best...and at worst, downright atrocious. Like Ashley, I know that I am good. History has shown that to be at least mostly true. But I too look at myself and think "Will I ever be good enough?"

But the most telling might be an older entry, called "Giving Up 12 Singles: A Lesson in Faith," in which a young Collin McHugh is the victim of bad BABIP luck and sequencing of hits:

I tried to run a fastball under the lefty's hands leaving the ball over the plate just a couple inches. He swung defensively and the sound of the splintering maple could be heard 20 rows up where my wife sat bundled in whatever "cold weather gear" we could rustle up in Vegas. The ball, apparently blessed with 20/20 vision, found a hole past the outstretched glove of my first baseman. I winced, as only a jilted pitcher can, and got the ball back from my infielders. What ensued was pure baseball magic. The next 7 hitters reached base via the single base hit. Pitch after good pitch was capped or jammed into those microscopic vacuums that hitters dream of and pitchers have nightmares about. Broken bats filled the opposing team's dugout trashcan while their players methodically circled the bases one by one. My catcher came out once to encourage me, saying "Keep making good pitches. They can't get lucky all day."After three more singles that traveled a combined 100 feet my pitching coach made the long walk from the dugout. He echoed the catcher with, "Geez. Can't catch a break, huh?" It was at this point that I had a decision to make. I could give in to the self-pity that was brewing inside me, or I could stay the course and keep making pitches in the hope that this inning would end without further damage.

Perhaps equally telling is the comments section of that entry:

It happens that fast sometimes. Collin McHugh is no stranger to a hot start. In his major league debut in 2012 with the Mets, McHugh tossed seven shutout innings at home against the Rockies, striking out nine and walking just one, earning a no-decision in New York's eventual 1-0 win. 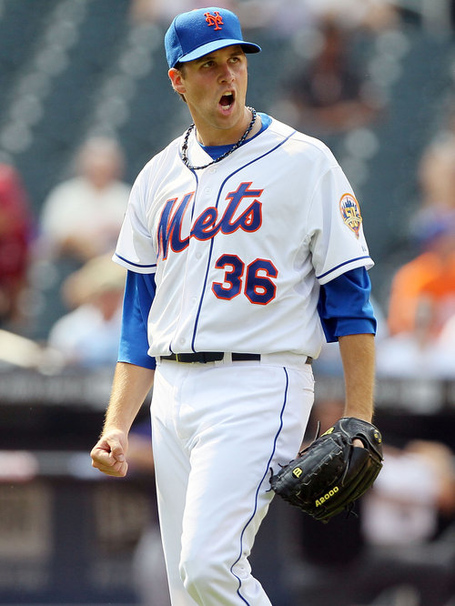 After that start, though, he was a lot more mortal, seeing his ERA climb to 7.59 with just 8 strikeouts and 7 walks. He began the next season bouncing between levels with two different organizations, accruing starts wearing five different jerseys: Tulsa (COL-AA), Las Vegas (NYM-AAA), Colorado Springs (COL-AAA), Colorado, and New York.

From "You looked great" to "Good luck in Colorado" was less than a month.

Collin McHugh is no stranger to the ups and downs of baseball, and he may be gun shy about basking too much in a good early start, since it's happened before and quickly worn off. He did it in the NL East, he did it in the NL West, and now he's had another great beginning in the AL West.

Baseball's like that sometimes. It puts you on top of the world, only to knock you off. Again and again, with disturbing regularity. McHugh knows this better than anyone.

Just because I could tell him didn't mean I should tell him... it was entirely too easy to be untrue to myself through this new ocean of media.-Collin McHugh

We can look at peripherals and wonder whether his success will be sustained. We can criticize his line drive rate. We can point to his obscenely-low BABIP as proof that he'll come crashing down to earth. But it's important to remember that if he does, he's no less a baseball player, and he's no less a human being. As he wrote in "Social (Media) Responsibility": "Just because I could tell him didn't mean I should tell him."

Here's hoping that this hot start is the beginning of him "figuring it out," but at the same time, here's remembering that even if it isn't, Collin McHugh has been a great story for the 2014 Houston Astros, and even if he cools down moving forward, he's already accomplished what millions of others before him set out to try and failed: He's a major league pitcher.

He's good enough to be here.