Astros change the color scheme of the blue star on the alternate orange cap.

Share All sharing options for: Astros make a change to alternate cap

The Astros rebranded the look of the team just over a year and half ago, and by all accounts it's been a smashing success. It would be pretty hard to find a person that didn't like the new/old school star-H hats and the return of the rainbow uniforms. It was a bit surprising when the Astros archivist and historian, Mike Acosta tweeted out a picture a "new" alternate cap just before the team's first Saturday game -

I admit this is probably only interesting to Mr. Coleman and myself, but it's still fascinating to see the team make a change after a full season with a solid blue star. This change also means an additional color in the team's color palette that makes up their identity.

It's so under the radar, this will be the second time the team wears the cap this season and the team store still shows the old cap. 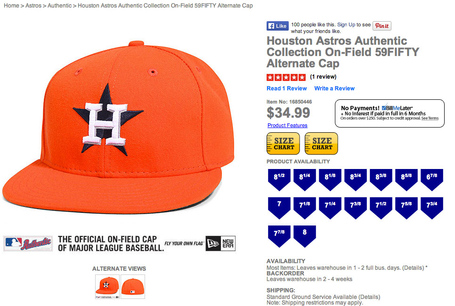 Can you spot the difference on tv, or in the stand? Do you like the change? Do you even care? Let me know in the comments.