The Astros can't have nice things. A's roll in the 9th.

The Astros walked through the concrete jungle, they had braved wild tribesman, poisonous death traps, and double-crossing guides. They had reached the final test, one more inning. They could taste victory, having  already come back once in the game. The Astros turned to head out to face the final inning, victory so close at hand. Suddenly, a giant yellow and green bolder came tumbling down. The Astros ran for their lives dropped a run here and there - until there were seven runs on the board. 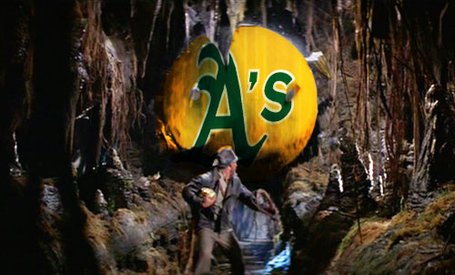 The Astros gasping, reached the end of the tunnel. They are now safe from the boulder, only to find a familiar unwelcome face standing over them. It was Donaldson and a mob of green and gold wildmen. "Astros, you choose the wrong friends. This time it will cost you", said Donaldson.

The wildmen drive the Astros running into the concrete jungle.

The Astros square off once again with the Athletics tomorrow at 6:10 PM cst, Dallas Keuchel (2-1) faces Dan Straily (1-1).