This game stunk so bad that I wrote the recap in the 7th inning.

Share All sharing options for: Astros lose to A's by at least 10 to 1

I wrote 590 words of a really amazing game recap in which the Astros’ game with the A’s was represented by a metaphor of General Porter leading his troops in battle.  But by the middle of the third, the Astros' ineptitude had totally dried my creative juices.

The game got too weird to describe in metaphor.  Here’s the tally of oddness:

And all that happened before the fourth inning, when the A’s led by a score of 6 – 1.

By the seventh inning, five of the A's first eight hits (and now they have twelve), were for extra bases.  The Astros committed four errors, all oddly during Craig Gentry plate appearances.  Paul Clemens, who came in to relieve Brett Oberholtzer after 4 innings and 92 pitches, intentionally plunked Jed Lowrie.  A whole week after Lowrie...bunted in the first inning and offended him.  L.J. Hoes dropped the same batted ball twice in Left Field.

To heck with it.  I'm done.  It's the top of the seventh and the Astros are down 10-1.  I'm not watching the rest of the game.  So I announced my intentions on twitter.  Here are the responses:

@CRPerry13 At this point, just start making things up for the recap. This is one game Astros fans will need to lock away in a safe place.

@CRPerry13 @native_astro If I were you I'd write a story about unicorns & call it a day.

@BustaPozee @CRPerry13 @native_astro Jezebel has a story today about cake that is a unicorn farting rainbows. That would be a better recap.

Well that's it for me tonight. I'd rather watch a documentary about the WNBA than watch the Astros play anymore.

Frankly, all of those Tweets were better than the Astros' play tonight.  Which stunk.  I literally have nothing positive to say about this game.  George Springer swings too hard, doesn't keep his eye on the ball, and looks frustrated.  Guzman struck out a hundred times and looked lost at first base.

So here you go.  Here is a Unicorn Rainbow Fart. 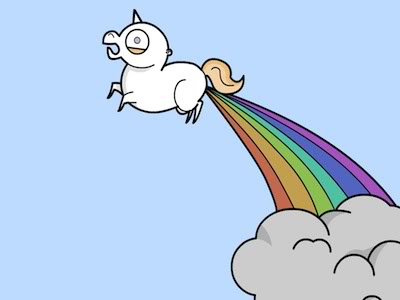 The end.  I suppose the game is still going on, but you really don't want to know any more about it.