Growing up Astros: Fans in the dark age

Terri Schlather grew up in a high point of Astros baseball and raising a child in the years of 100 loss seasons forces her to wonder if a losing hometown team will sway her daughter's loyalty to the Astros she was raised to love.

Share All sharing options for: Growing up Astros: Fans in the dark age

Perhaps this is a topic that is a bit closer to my heart because I’m not just the mother of a twelve year old, I'm a fanatic when it comes to Houston Astros baseball. When I was the age of my daughter, Sabrina, the Astros were contenders. They were good. My memories of rainbow-colored seats in the Astrodome are also memories of high fives and celebratory finishes of the team I would align myself to for a lifetime.

As I watch my daughter walk away from games at Minute Maid Park without those types of experiences at every turn, I wonder how it will affect her loyalty to the team I’ve raised her to support.

Although some adults find baseball later in life, the fans that I know that are ravenous for the game are the ones who have it tattooed in their DNA. They grew up in baseball families or played baseball as kids. They were introduced to the game early and although they may cheer for the team local to where they live as adults, that team from their hometown, the one whose cap they wore until the bill frayed and they knew washing it would make the fabric disintegrate? That is the one that owns their hearts.

We’ve even seen it with players – there’s an affinity for the team you grew up cheering for. There’s a desire to not just be a big league ball player, but one who plays for the team you watched with your family in the ballpark and on the television in your living room. The fantasies of being an All Star always included the guys on the field in front of you.

Kids in Houston today have a very different baseball experience. If, and that’s a big if, their families have stuck with the team in the tough years, they don’t often spend the end of a game smiling and cheering as the winners leave the field. Instead, they walk away with talk of, "Perhaps we’ll get ‘em tomorrow, Dad?"

The idea of a downtrodden home team spoiling baseball for a lifetime worries me as a mom. It worries me as a Houston Astros fan. So I went to the experts – the kids I know that love baseball - and asked a few of them their favorite things about the Houston Astros- the kids’ points of view. I’m reserving the kids’ last names…they are minors after all. Here are just a few of the responses I got:

"My favorite thing about the Astros is that I can watch them anytime and from anywhere in the ballpark." -Sabrina S.

"There are players that I really love. Some have been traded, but not all of them. I met Jose Altuve last year and it was really cool that we’re the same height almost." –Michael E.

"I love going to games. It’s fun at Minute Maid. Even when the Astros don’t win, I always hope they pull it off. Sometimes they rally and come back and that’s really exciting." –Connor W. 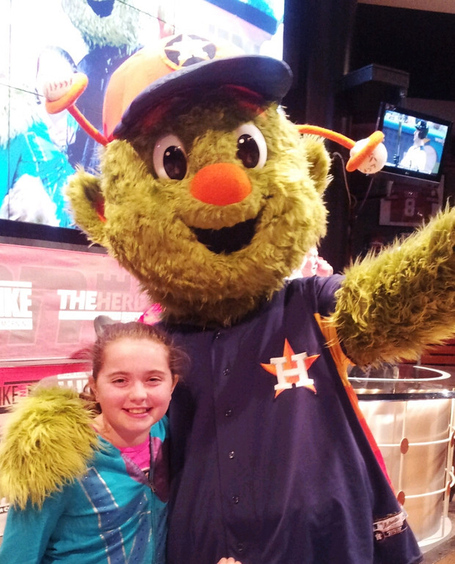 Okay, so maybe being an Astro fan during a period of three seasons of 100 losses or more isn’t as bad as I thought it would be. Maybe kids love the game for the game and the experience, and winning doesn’t really matter or affect their team loyalties?

When I asked the same kids if they wished they cheered for a different team, they replied with, "Sometimes, especially during the World Series." "I like that me, my dad and my grandpa all cheer for the same team, so I think I will probably keep cheering for the Astros." And my own Sabrina replied with "Mom, you’d let me cheer for someone else?! Just kidding! I like the Astros, but it’s hard when they lose when you know other teams win more and winning is just fun."

When I was in those ‘tween years it was the mid-80’s. I watched Nolan Ryan and Mike Scott, Enos Cabell and Jose Cruz. I remember seeing Phil Garner in a restaurant once as a kid and completely freaking out. Astros royalty eating at the same place as me? It was the highlight of my life to that point.

But with the turnstile roster of the 2011-14 Astros, who would my child remember? Who will she talk about when she reminisces about her childhood days of helmet sundaes and cotton candy and Sunday afternoon baseball? I asked her about her all-time favorite Astros. My lone criteria was that she had to remember seeing them play on a baseball field – not just someone she’d heard me or her Aunt Sally talk about in a tirade about baseball in Houston. 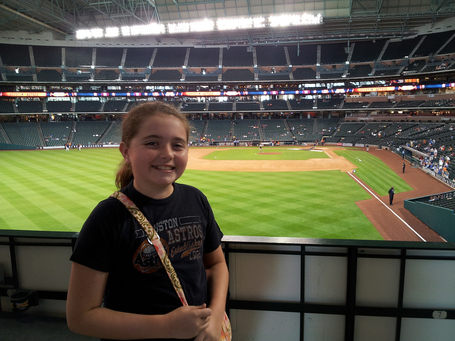 Her list surprised me. Some are still Astros, many are not, but J.D. Martinez and Craig Biggio were listed. Dallas Keuchel and Jordan Lyles, Brett Wallace and Lance Berkman, and Bud Norris. As she listed off her favorite players I realized that she remembers the ends of the careers of Astros greats. So there’s that. They were her introduction to the game, and with folks like George Springer entering the stage, she will likely bear witness to full careers of future superstars. Perhaps memories of the Astros wouldn’t send her screaming to another team after all. 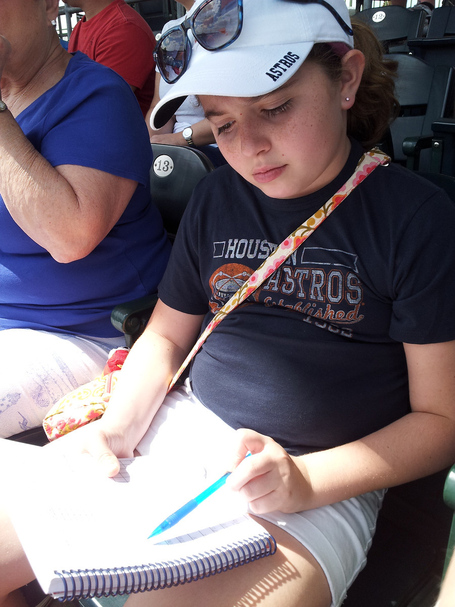 Then the scorebooks came out. I taught Sabrina how to keep score over the course of three or four seasons starting at age 6ish, and she’s pretty proficient now at age 12. There are notes on pages that help jog her memory, they’re her baseball journal of sorts, helping her remember highlights she saw on a baseball diamond - the night Hunter Pence was pulled from the game because he’d been traded, the Saturday afternoon when Jose Altuve hit an in-the-park homerun (that one even notes that it was Sabrina, me, my mom and Aunt Sally’s mom in attendance – a girls’ day at the game for us), the game when Wilton Lopez gave her bubble gum from the bullpen, the Astroline when she taught Fernando Rodriguez a yoga pose, meeting Jeff Luhnow even ranks, and high on the list is the Spring Training game where she celebrated her tenth birthday by throwing out the first pitch. 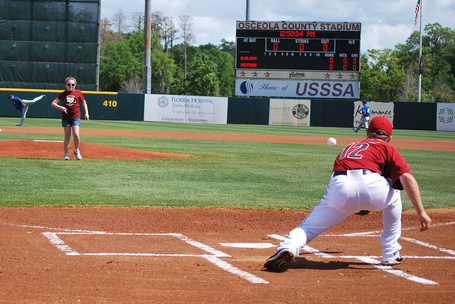 My daughter’s baseball memories aren’t of National League Championships. She doesn’t recall the Astros going to the World Series. But perhaps the relationship we have with baseball isn’t always about winning and losing. All of those memories she has about the Astros? Those are personal experiences with baseball. They are about one moment in time – the way kids live their lives. 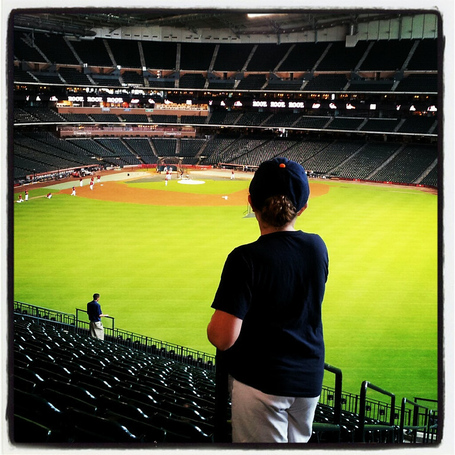 As it turns out, no one needs to call CPS to report me for making my child cheer for the Astros for the past several years. I think she'll be an Astros fan for many, many years to come. Why? She’s learned to find the fun even in seasons of loss.

If only the grown ups could too.

Why do you still cheer for the Houston Astros? Are they your childhood team?