A look across the Astros major and minor system's bobblehead promotions.

I'm not an expert at any one thing in baseball unlike many of my fellow writers on The Crawfish Boxes. The one thing I feel I can claim an expertise in is bobbleheads. I have collected bobbleheads all of my life. They range from a Roy Oswalt bulldozer to bobble-belly Orbit. My collection has grown to the point where some would and do question my sanity.

To be honest, I look that the promotional schedule first when I plan out my baseball season. When are the bobbleheads being given out? I've added a new part to this routine, by looking at the minor affiliates' as well. The minor leagues have become the first place to get a prospects' bobble likeness.

Now at this point, I would like grade the bobbleheads being given out across the Astros' system. The rankings are completely arbitrary since we don't have a picture of all them.

Trevor Rosenthal Bobblehead - Quad Cities River Bandits - The Rosenthal bobblehead gets a lower grade than the rest of the bobblehead for the simple fact he is a Cardinal. Of course, I can't fault Quad Cities for having this bobblehead, they were previously affiliated with the St. Louis.

RedHawks Garden Gnome - Oklahoma City RedHawks - The RedHawks are not giving away a bobblehead this season, thus the 40-grade. To make up for this they have the next best thing, a gnome. Gnomes are a corky staple of sports promotions these days, best done with a player gnome like the Hook's Nolan Ryan Gnome last season. I would like have liked to see a George Springer bobblehead, but it may be soon for that. I guess I can go to one of the many $1 beer nights in OKC, to drown my sorrows over the lack of a Triple-A bobblehead. 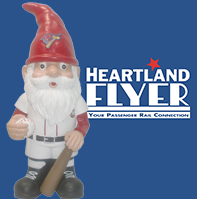 Stu Witt Bobblehead - Lancaster JetHawks - This bobblehead's only mark against is the fact it is not of a baseball player or coach. Witt has a long track record in the military and he is one of the driving forces behind commercial space flight.

Craig Biggio Bobblehead - Quad Cities River Bandits - I think Quad Cities is attempting to make me spend the summer between Texas and Iowa. A bobblehead of an all-time Astros is alway a winner.

Jeff Bagwell Bobblehead - Quad Cities River Bandits - I repeat, a bobblehead of an all-time Astros is alway a winner.

Nolan Ryan Bobblehead - Quad Cities River Bandits - Uniqueness is the key for high grades in the world of bobbleheads. At the moment I know the Corpus Christi bobblehead is unique, without a picture I can only assume it's a more traditional bobblehead. It's still Nolan Ryan, so high marks.

Roger Clemens Bobblehead - Quad Cities River Bandits - A 11-time All-Star, 7-time Cy Young winner, and 1-time MVP, need I go on? Clemens is one of the greatest pitcher of all time. Of course he should have a bobblehead. Great choices all around for Quad Cities.

Roy Oswalt Bobblehead - Houston Astros - I have soft spot for Roy and will be first in line to get this bobblehead.

Lance Berkman Bobblehead - Houston Astros - Instead of the traditional bobblehead I hope the team finds a way to recreate one of Lance's more unique moments. For example, his famous catch on the hill. I reserve the right to change my grade if that happens.

Nolan Ryan Sliding Bobblehead - Corpus Christi Hooks - A good showing for the Hook's lone bobblehead this season. This bobblehead gets a bump up for it's uniqueness. One, Ryan isn't throwing a baseball. Two, he's pull a pitcher move by wearing a jack on the base paths, and three he's SLIDING. A bobblehead of a pitcher not throwing a baseball is different, having doing something else athletic is outstanding. 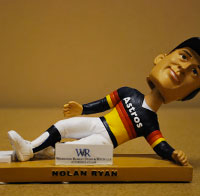 Mystery Bobblehead - Lancaster JetHawks - I'm a sucker a surprise. This bobblehead will be given out during Star Wars weekend so it could be something along the lines of the one Anthony picked up last season. I would also make a note of the awesome theme nights in Lancaster - medieval night, dapper night, 'Hawking Dead', and World Cup Jersey giveaway night.

Bobble Truck - Quad Cities River Bandits - What is a bobble truck? I don't know but I want to find out.

Johnny Evers Bobblehead - Tri-City ValleyCats - Evers is a Hall of Famer from New York, he was a World Series winner with the Cubs and Braves. He also won the 1914 Most Valuable Player award in the National League. If you were apart of the last time the Cubs won a World Series, that's bobblehead worthy in itself. A throwback bobblehead is always an excellent choice. 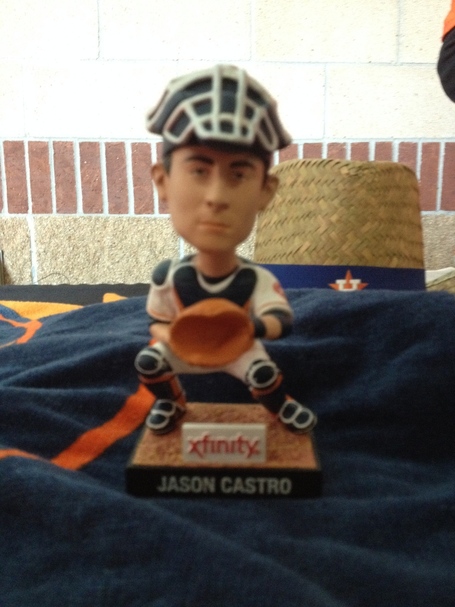 Carlos Correa Bobblehead - Quad Cities River Bandits - The Holy Grail of Astros related bobbleheads this season - a Carlos Correa bobblehead. I'm pretty sure the likeness of the Astros' top pick with play heavenly music with each bobble. This bobblehead is full of #want.

Nolan and Reid Ryan Bobblehead - Houston Astros - I have predicted what this bobblehead will look like, but I'm sure it will be greater than I imagine. Reid has done wonders to turn around the image of the team in a relatively short time - as a result he gets an 80. 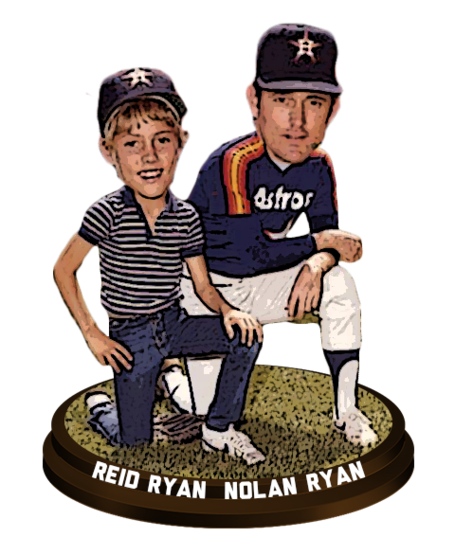 If you've reached the end of this exercise in bobblehead madness, bravo. I'll see you at the next bobblehead night at the ballpark.