Chinks in the Armor: Impressions of Carlos Rodon's Performance vs. Miami

Maybe he is human, after all. While it is certainly not time to jump off the Carlos Rodon bandwagon, there may be some legitimate cause for concern.

Share All sharing options for: Chinks in the Armor: Impressions of Carlos Rodon's Performance vs. Miami

Throughout the early part of this year's college baseball season, there has been chatter about the diminished stuff that Carlos Rodon has shown compared to previous years. I dismissed this talk as sour grapes, like the smear campaign led against Jadeveon Clowney during the 2013 college football campaign, or the knocks against Andrew Luck during his draft year.

After all, Rodon's ERA of 2.09 and 55/18 strikeout to walk ratio hardly qualify as disappointing, even by his standards. Determined to confirm my suspicions that Rodon was being unfairly railed against, I sat down to watch his start against the Miami Hurricanes on Friday, and was surprised by what I saw.

When I watched Rodon last year during the 2013 College World Series, I saw a pitcher who would have ranked as the top pitching prospect in the game- ahead of guys like Mark Appel, Archie Bradley, Dylan Bundy and Taijuan Walker. He was showing two legitimate 70-grade pitches in his 94-96 MPH fastball and his mind-bending slider, which he sculpted the break on effortlessly.

He could give the slider a straight drop or have it dive into the knees of right handed hitters, and his fastball was borderline unfair coming from the left side. College hitters were no match for him, and his command looked as impressive as it ever had. There was no doubt in my mind that Carlos Rodon would go No. 1 overall in the 2014 draft at that point. No nit-picking could change my mind. 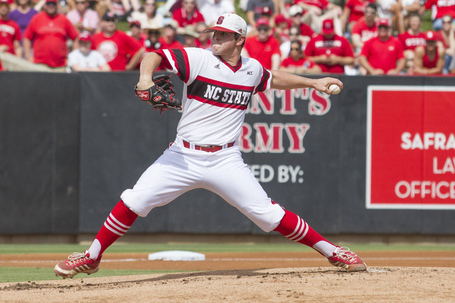 When I turned on the NC State-Miami game on Friday, I expected to see a Carlos Rodon that at the least closely resembled the version that I saw in Omaha last year. I thought that perhaps his fastball's juice was a little less consistent, or that he was struggling with the command of his slider, but I thought I'd see the same shape on the breaking ball.

That's not what the Wolfpack ace displayed against the 'Canes. His fastball showed plenty of heat, there was no radar gun on the broadcast, but there wasn't a noticeably large dropoff in the velocity I'm accustomed to seeing with him.

The root of the concern, at least for me, comes from his command and the look of his slider. The slider has flattened out a lot. His spin control last season absolutely blew me away, but all of a sudden he is having trouble both snapping off his slider and placing it where he needs to.

Given that the slider was the pitch that separated him from the rest of the class, it is imperative that the offering regains its former glory if Rodon is to get back to sure-fire first overall pick status. Even with his fastball, Rodon was missing a lot of pitches down and didn't look to have his normal feel for the zone.

Needless to say, Rodon is far from in midseason form right now. That said, I'm far from jumping ship on Carlos, and if the draft were tomorrow I'd still be targeting him with the first overall pick.

However, if the Carlos Rodon who was on the hill against Miami is the one who's showing up in May, I'd be less supportive of making him the top pick. This draft class is deep, and there are plenty of players, such as Tyler Kolek, Brady Aiken and Alex Jackson, who could easily overtake Rodon if he can't get back in his groove.