Once forgotten, casually dismissed as a probable reliever, Astros lefty Dallas Keuchel is asserting himself and putting himself in the running for best pitcher on the staff.

Back in the throes of the summer of '13, this happened: 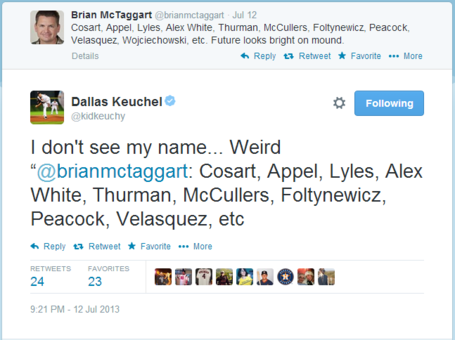 Despite that left-handed pitcher Dallas Keuchel had started twelve games for the Houston Astros during the season and despite that he had made sixteen starts the year prior, Astros.com's own' beat reporter offered a mild insult by excluding the then-25-year-old Keuchel from his list. Perhaps Tags' omission was merely the fallout from the 140-character limit that has been imposed on modern communication. If so, the tacit implication is that the ten pitchers mentioned hold a brighter future, and that Keuchel has been relegated to the "etc" portion of the depth chart.

Tags' omission was probably excusable at the time, even if it was rude towards a guy who had already earned a starters' gig. Keuchel was drafted out of the University of Arkansas in the 7th round of the 2009 draft, a "soft-tossing lefty" that some projected as a possible long reliever or bullpen specialist if he couldn't crack a major league rotation. He made it to the majors as a starter - a feat that should not be under-stated, given prospect bust rates outside of the first round of the draft - in 2012, and during his first two seasons posted lousy ERAs of 5.27 and 5.15. The casual viewer might think that Keuchel was simply a warm-body placeholder as the Astros attempted to rebuild their ravaged club.

A look under the hood in 2013 told a different story, however. Upon observing Keuchel's climbing strikeout rate, miniscule walk rate, and 3.58 xFIP (see below), I posited in December that Keuchel had the potential to be the best starter on the 2014 squad.

We writers, readers, and commenters may be making a mistake when we dismiss him as "maybe the 5th starter, or perhaps the long-relief swing man." If he improves even slightly over 2013, he could be the best starter on the club this coming season.

Fast-forward to 2014. Through three starts, Keuchel owns a 3.50 ERA (3.35 xFIP), a yet-increasing strikeout rate, and a similarly tiny walk rate. In his third start on April 16th, he simply baffled Royals' hitters over his six innings.

This year, Keuchel is throwing his changeup more often than in 2013, and it has been extremely effective. His changeup generates a whiff 22% of the time, up from 15% last season. The result could explain his increase in strikeout rate, which is up to 8 strikeouts per 9 innings.

The changeup comes in 10 mph slower than his fastball/sinker combo, which are up to 91 mph this season. The time has come to cease and desist in calling Keuchel a "soft-tossing lefty". All of his pitches have seen a velocity increase of 3 mph since 2012, and he occasionally touches 93 with his fastball and sinker, which average the same speed. Since Keuchel is only 26 years old, the velocity increase is likely for real, and corresponds with an age at which many pitchers add velocity and many batters add home run power. Likewise, his 2014 velocity is not a spike, as the increase in pitch speed has seen a gentle climb since Keuchel entered the league.

Keuchel wiping out Alex Gordon on a slider:

Keuchel's mechanics are extremely clean, and his pitches leave his hand in almost exactly the same spot. Our resident pitcher mechanics expert, Brooks Parker, has this to say:

He's always had very clean mechanics that have been very repeatable. The thing that held him back some in the past was that his momentum was inconsistent. I could usually get a fairly decent idea about which end of FB velocity range his FB would be based on watching his delivery. There was some mild difference in his momentum to the plate between his fastballs at 87-90 and 90-92.
We've known for awhile that Strom is big on momentum in the delivery. It's too early to quantify his influence, but if he continues to show consistent improved FB velocity, it's not outlandish to credit Strom for helping Keuchel be more consistent with his momentum.

The benefit of clean and consistent mechanics is twofold: first, as mentioned above, batters have more difficulty distinguishing different pitches if they look the same coming out of the pitcher's hand. His changeup and sinker leave his hand within 1/2 of an inch from each other on average, and have identical horizontal break and nearly identical vertical break, making them difficult to distinguish between for hitters. For the first half of both pitches' trajectories, they look the same. Then, as the break begins, they still look the same. Finally, because the changeup is moving slower than the sinker, it ends up at the batter's feet, whereas the sinker comes in around the knees.

Here is Keuchel's sinker (89 mph) in the fourth inning versus Omar Infante:

Note how both pitches look identical until after the break begins, which led to Infante thinking he was swinging at a second sinker, only to learn that he just looked very foolish on TV by swinging way out in front. 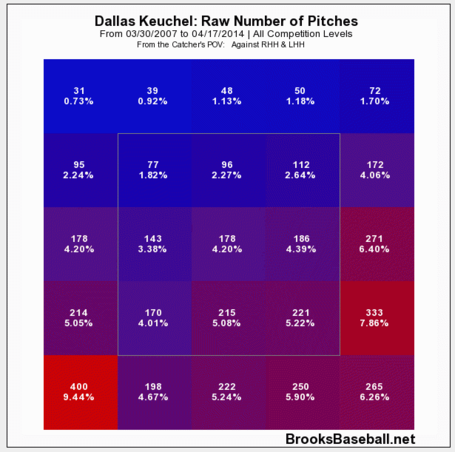 Since Keuchel has been able to hit his spot so repeatedly and effectively, it causes the hitters to swing at pitches they'd probably rather not. This seems to have the side-effect of convincing umpires to lower their perception of the strike zone, which in turn has led to a high number of strike-looking calls that Pitch F/X actually recognizes as balls below the zone: 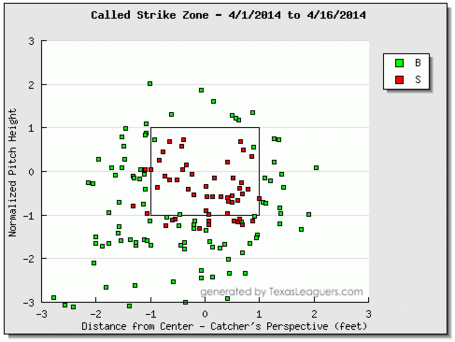 Keuchel's ability to stretch the zone by locating his pitches at the bottom of it at will has increased his effectiveness because batters also have a high swing-and-miss rate on pitches in that spot. 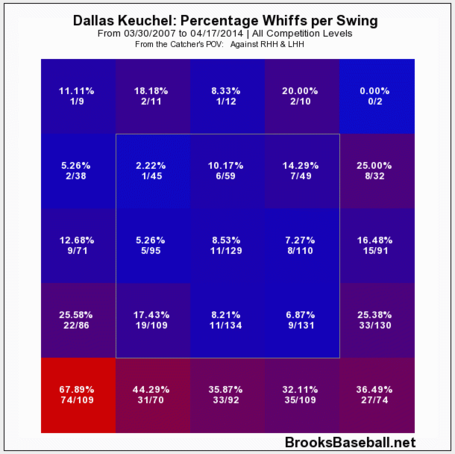 Keuchel has increased his velocity, commands his pitches impeccably, and has fooled hitters (and umpires) into allowing him to play below the strike zone, where he induces whiffs and ground balls at near-elite rates. His Ground Ball rate, which I cited in December as a major reason he could break out in 2014, now sits at 62% on the season, good for 5th-highest among all qualified major league pitchers.

Oddly, as good as Keuchel has been thus far, there is a strong argument to be made that he has also been unlucky. Though his career BABIP of .317 is very close to the .320 that he wields at present, his BABIP has been one of the main reasons some have projected improvement for the young hurler. In his Fielding and Ballpark Independing scoring, TCB rogue contributor reillocity found that Keuchel was the 2nd-most effective starter on the Astros in 2013, and not-so-rogue contributor clack tells us that Keuchel's xBABIP in 2013 of .305 indicated a strong probability of regression because of it's difference with his sky-high .332 BABIP. Once again, Keuchel's .320 BABIP can be considered high (league-average for qualified starters is .290), and finer times might be ahead for the lefty.

Finally, Keuchel's 20% HR/FB rate is due some leveling-out. While his career stats indicate that Keuchel might always have a HR/FB rate that is higher than league average (10%), his 2014 rate is currently14th-highest out of 115 major league pitchers. With a return to normalcy (whatever that may be), Keuchel's ERA will drop.

I don't want to get all giddy or predict that Keuchel will be the next Greg Maddux or anything. But the more I watch and dig into his data, the more it looks like he's a guy who might have an extremely successful career, and possibly a great one. If the way he's pitched in 2014 continues (and it could, since it's consistent with last season, only with some reasonable improvement), then the run prevention numbers will stay low, and he'll be a very sneaky candidate for Astros pitcher of the year, and might get some national notice. If he pitches really well, perhaps MLB.com's beat reporters will remember that he exists as well.

xFIP - a pitcher's projected ERA based only on things he can control - strikeouts and walks, namely.

BABIP - grossly misrepresented as "luck", BABIP is a measure of the percentage of balls that are put in play which result in hits. Very useful when compared to xBABIP for projecting a player's regression back towards a statistical average.

xBABIP - similar to xFIP - what a player's BABIP would be if factors he can't control were removed, such as defense. xBABIP is calculated from batted ball rates rather than hits, strikeouts, and home runs.