Share All sharing options for: Bo Porter is sick

I thought it was a little weird that Bo Porter would be wearing such a heavy jacket at Minute Maid Park this evening, for the game against the Kansas City Royals:

It is 57 degrees, which could be considered cold by some, but not heavy winter jacket cold. Curious I went to Twitter to find out a possible reason for this:

Does anyone else think it's weird Bo Porter is wearing such a heavy jacket? pic.twitter.com/XccURyJNuN

Come to find out, the Astros manager is sick: 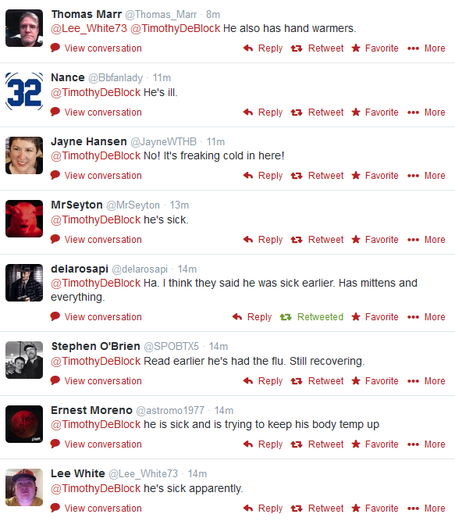 Mittens and hand warmers, the only thing he's missing is ear muffs.

@TimothyDeBlock He's sick. He's had the chills all day. He has flu-like symptoms. That's at least four layers he's wearing now. Had 3 at bp

My only reaction is, "AWWW!" and I hope he gets well soon. A sick Bo Porter means we don't get enthusiasm like this:

And he definitely won't be handing out any birthday cakes or hugs.