Astros even series with Rangers; Win 6-5 in the 10th

Astros flip the script on the Rangers, win extra inning affair in Arlington.

Share All sharing options for: Astros even series with Rangers; Win 6-5 in the 10th

This is some kind of joke? Maybe a dream? No, it's real Astros fans. The Astros have a chance to actually win a series with the Rangers after a 6-5 win in game two.

Nothing comes easy for the Astros, Houston once again put the opposing starting pitcher on no-hitter watch. Tanner Scheppers retired the first nine of the ten batters he faced. The Astros' only baserunner was Jason Castro, who was hit by a pitch. In the fourth, Castro once again reached base - this time via a walk. Jose Altuve and Chris Carter would follow with a pair of singles to load the bases. Carlos Corporan scored a run with a sac-fly and Matt Dominguez continued his success this series with an RBI single. Setting the stage for Bob, er Robbie Grossman.

Grossman deposited a hanging curveball into the right-field stands, driving in three runs. The offensive outburst put the Astros up 5-2 in the fourth. The Rangers would chip away with aggressive play on the basepaths. Donnie Murphy, after going first to third on a Leonys Martin single, scored when J.P. Arencibia grounded into a double play.

Elvis Andrus would be the spark plug for the Rangers' offense all night - getting two hits, two walks, and scoring two runs. Alex Rios split the gap between the Astros defense for double, scoring Andrus to put the Rangers down one in the eighth. Rios neutralized his effort, as he was thrown out trying to steal third with no outs.

Bo Porter went with Houston's lone lefty in the pen Kevin Chapman to pitch the ninth. Left-handed bats Mitch Moreland and Leonys Martin were slated to bat in the inning. Ron Washington counted by sending up UT-Arlington product Michael Choice to bat for Moreland. It paid off, Choice timed the second straight fastball he faced and tied the game with a home run.

That all too familiar feeling of "oh well, at least they tried" crept after the game was tied. It was a fleeting as Jason Castro got a lucky bounce off the outfield wall that turned his hit from double to a triple. The Astros pint-size cleanup hitter, Jose Altuve, drove in pinch-runner Marwin Gonzalez with a deep sac-fly.

Elvis Andrus made every effort to spoil Anthony Bass' save attempt, he singled and stole second before an out was recorded. Jonathan Villar made arguably one of the best defensive play this season thus far in 2014, snagging a sharply hit Alex Rios grounder deep in the hole and gunned him out.

After an intentional walk to Prince Fielder. Andrus moved over to third on a wild pitch, and by that point I had no fingernails left. Bass struck out last night's hero Kevin Kouzmanoff and forced today's hero Michael Choice into a soft grounder to first to close out the game.

Jarred Cosart wasn't dominate. He kept the team in the game when his breaking stuff wasn't at its best. The Rangers laid off his curveball for much of the night. Cosart pitched seven innings, allowing six hits, two walks, and striking out eight. Shin-Soo choo was completely baffled by Cosart, striking out four time against the Astros starter. Choo would strike out a fifth time the game to collect a platinum sombrero. 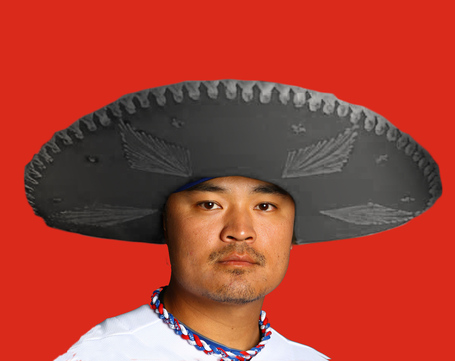 Matt Albers made his first appearance since returning to the team in relief of Cosart. Alberts gave up his first earned run this season on the Alex Rios double in the eighth. To be frank, it could have been avoided. The previous pitch before the double looked to be strike three on Rios, and the Rangers broadcast showed more than half of the ball in the strike zone.

There were questions on twitter, why we didn't see Chad Qualls or Josh Fields in the late innings? Jerome Williams would have also been another fine option. In defense of Bo Porter, I see what he wanted to do sending out the lefty to face to possible left-handed batters in the inning.

The top of the Astros lineup, Dexter Fowler and Alex Presley, went 0-for-10 in game - including four strikeouts.

It should be noted, Tanner Scheppers pitched an excellent game except for one inning. He didn't allow a hit outside of the fourth inning, and struck out six Astros.