A poor start, spotty hitting, and a key error resulted in an Astros loss in Toronto Wednesday night, their second consecutive to the Blue Jays.

The trouble started in the bottom of the first. After allowing a one-out single to Maicer Izturis, starter Lucas Harrell served up an RBI double to Jose Bautista. One out later, Adam Lind drove a 2-0 curveball up the middle to score the Jays' outfielder. Just like that, Toronto had a two-run lead.

And it seemed like that was all they'd need. Toronto starter Brandon Morrow was in vintage form, striking out six Astros on his first time through the lineup, five of them swinging. More impressive yet, he regularly painted the corners with a 98 MPH fastball. For a pitcher who threw only 54.1 innings last year, this performance could augur well for his 2014 season.

The Jays--or, rather, the Astros--gave Morrow more run support in the bottom of the fifth. A single, steal, and another single made the score 3-0. The disaster, though, came one out later with the bases loaded. Using his sinking fastball, Harrell induced what looked to be a double-play from Toronto's new catcher, Dioner Navarro. The ball bounced cleanly to third baseman Matt Dominguez, who proceeded to throw the ball into right field. Izturis scored his second run and Bautista his first, making the score 5-0.

Five runs would prove to be enough for Morrow and the Jays, though Houston's offense showed life in the 6th. Following a single by Dexter Fowler, waiver claim Alex Presley smacked a fastball over the right-center field fence, his second homer in as many series. With one out, José Altuve then tripled, later scoring on a Chris Carter ground-out. Suddenly, the Astros were down by only two. 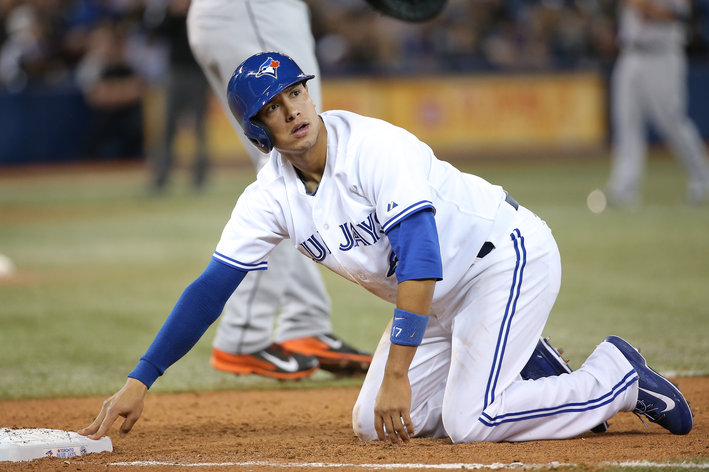 But the dagger would come in the bottom of the 7th. Making his second appearance since being recalled from AAA, Josh Zeid gave up an admittedly flukish pop-up single to Navarro. What was not flukish, though, was Toronto's next hit. Brett Lawrie clobbered a hanging curveball into the left field seats, putting the game out of reach for good.

In the end, Houston's coaches should be pleased with Presley and Altuve. Nonetheless, Harrell's performance--4.1 innings pitched, 7 hits, 4 earned runs, 2 strikeouts, and 3 walks--will raise only more questions about his future with the team. One should expect the Astros' offense to have better luck with runners in scoring position (it went 0-3 on Wednesday), but their pitching staff could take longer to fix.

For now, the team will rely on Dallas Keuchel to pick things up tomorrow against R.A. Dickey. Against Toronto last July, Keuchel threw 7.1 innings, giving up six earned runs and three homers.

--After throwing 1.1 innings in relief of Harrell, Jerome Williams left the game with a groin injury.

--Williams' pick-off of Ryan Goins marked Houston's second pick-off in as many games.