It's the opening series of 2014, it's time for Astros baseball.

The Derek retirement tour begins in Houston. I feel the hundreds of eyerolls that just came from the Astros fans reading that. That's been the general feeling around town, excitement about Opening Day and zero enjoyment over the fact that it's against the Yankees. If I were to sum it up in one video -

A look at the Yankees

The Yankees had probably one of their strangest off-seasons in recent memory, Alex Rodriguez gave up fighting his suspension, they reloaded with top free agents, and actually lost a bidding war over a free agent. One of the staples of the Yankee lineup the past fews season is now wearing Mariner teal.  That said, the Yankees still picked up Carlos Beltran, Brian McCann, and Jacoby Ellsbury. Beltran was nothing short of a rock for the Cardinals the past few seasons, but he has seen a decline in quality at-bats against left-handers. Ellsbury once covered any misstep in the field and the batter box with speed. He still can for the most part, but he has learned to take a better first step. He will light up the basepaths after digging to the pitcher's pitch count. A rare member of the Yankee home grown talent, Brett Gardner was more aggressive in the zone in 2013, resulting in 51 extra base hits. It's also a luxury to play Gardner in left, with Ellsbury in the lineup. 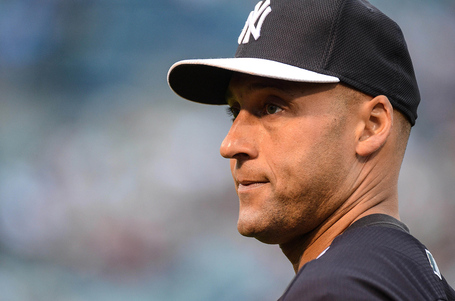 The biggest question going into 2014 around the Yankees is Derek Jeter, how much time is left on his clock? It reminds me of Jeff Bagwell gutting out every single hit in his final season, and imagine him playing shortstop on top of that. Kelly Johnson takes over for Robinson Cano, he still has some nice pop in his bat - collecting 16 home runs in each of his past two seasons.

I would write something about Brian McCann, but one of the unwritten rules of baseball forbids me. At 38, Alfonso Soriano is still has his defining tools of power and a strong arm. Expect Soriano and Beltran to swap between right field and designed hitter. I'm not sure if Mark Teixeira has a second wrist at this point of his career? But, the amount of rest he has had on it can only help. Looking over the lineup, the Yankees are a bit of a paradox. Can they be the 2013 Red Sox and find the right pieces to win it all? Will they be an elephant graveyard of aging players that will fall apart during the long season? We have to wait to find out.

A look at the 'Stros

Dexter Fowler will lead things off in 2014, he comes in with a team-best .369 OBP in 2013. Fowler should fill in nicely were Brandon Barnes left of in centerfield (even if it won't be gif worthy like it was with Barnes). Robbie (friends call him Bob and by friends I mean us crazy Astros bloggers) Grossman is man posed for a breakout, hitting .400 OBP in Spring Training. Jason Castro has been the anchor for this Astros lineup since he was debuted in 2010, and batting .276/.350/.485 in 2013. Jose Altuve in the three-hole or batting clean up is strange to the eye for sure, but the thought process is simple you don't need a homerun every time to start a rally. The question is whether we see the 2013 Altuve or 2012 version. Jesus Guzman has taken the first base job by almost default since the Astros failed to find a replacement suitable to their liking. Guzman will have to improve upon his 2013 campaign that saw him struggle against left-handers and saw a rise in his strikeout rate. 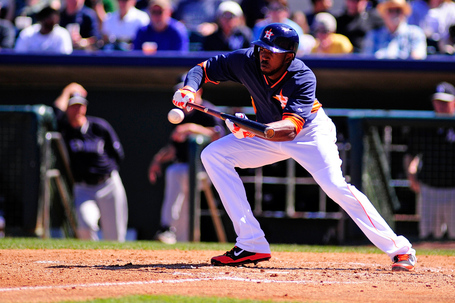 Trogdor returns, Chris Carter, is slotted in at designated hitter once again. Carter will need to improve on his strikeout rate if does not want to be casualty of a farm system ready to burst. Matt Dominguez mans the hot-corner, the only question around Matty-D is will his bat match with his glove at some point. L.J. Hoes make his first Opening Day start and will make an interesting dynamic with Villar behind him at the bottom of the lineup.

This must be one of the tallest Opening Day matchup in baseball history, both pitchers at 6'7". Feldman was the big signing this offseason for the Astros, he wasn't a flashing signing but the Astros needed - veteran leadership and above league average. His above average ground ball rate works right into the Astros' plan, with a young, nibble infield behind him. Sabathia has dropped 2+ miles per hour off his 2-seam fastball these past two seasons. His walk rate ballooned to near four per nine innings in 2013. The question is whether a slim-down this offseason will help or is Sabathia best days behind him?

Spring Training 2014: The view from the AL East
2014 season preview: Why the Astros will win

Jarred Cosart, plain and simple going to the win the game if he can keep his control in check. He had a 5.2 BB/9 and 4.9 K/9 rate in 60 innings pitched in the majors last season. The question remains where is future is in the rotation or at the end of the bullpen, it will depend on if he can develop secondary pitches and lower his walk rate. Kuroda was one of the most consistent pitchers for the Yankees in 2013, and consistent pitcher over his career period. His BABIP has barely changed over the last three season - . 288, .282, and .283.

Jose Altuve and Jason Castro are each 2-for-6 against Kuroda and the Astros' catcher counted for a double. Dexter Fowler has .227 OBP in 21 at-bats. We may see Alex Presley in place of Hoes, the Astros newcomer has one home run in three at-bats against the right-hander.

Jacoby Ellsbury is 0-for-3 with a strike out against Cosart.

Brett Oberholtzer took a rotation spot after the trade of Bud Norris and never let go of it. Obe' isn't going to blow anyone away, working in the low 90's. But, his changeup is killer to right-handed bats. Ivan Nova has been a bright spot for the Yankees' older staff. He posted a 2.70 ERA over 16 starts in the final part of the season.

Chris Carter is the only Astro to have faced Nova and is 0-for-1 with a walk. Oberholtzer faced the Yankees on September 27, 2013, allowing only three hits total over 5.1 innings, including a double to Alfonso Soriano.