Let us take a look at the shiny and new edition of the Mariners.

Share All sharing options for: Spring training 2014: Touring the Mariners

We are continuing our look around the major leagues in preparation for the 2014 season. Our next stop takes us to the end of the Oregon trail, north to Seattle. There are a few new faces that hope to turn around the M's recent history.

The Mariners have finished fourth in the AL West eight out of the last ten seasons - including four straight coming into 2014. Fourth in the AL West used to mean the basement, but now the Astros are nice and cozy in fifth place. The AL West has had a sort of arms race between the Rangers and Angels. The Rangers have added big name player after big name player in previous seasons, while having one of the strongest farm systems in baseball. This offseason was no different in Arlington, adding both Prince Fielder and Shin-Soo Choo.

The Angels, on the other hand, streamlined their lineup. There will no longer be any question of who will play center or the enigma of an all-world player out in left field. Gone are Peter Bourjos and Mark Trumbo, in are David Freese, an everyday Kole Calhoun, and Mike Trout in center. One of the main concern surrounding the Angels will always be the health of its' older stars - Albert Pujols and Josh Hamilton. The three-headed monster of Pujols, Hamilton,  and Trout is hard to match by any team when healthy. The other concern is the starting pitching; after Jered Weaver and C.J. Wilson, who will step up? Last year's patchwork plan didn't work, will Garrett Richards, Hector Santiago, and Tyler Skaggs be enough this time around?

Just to show the depth of this division, I left the back-to-back AL West Division Champions for last. The Athletics have found a way to be on top when the dust settles the past two seasons. The "newish" formula hasn't changed for the A's: pitching and the long ball. The lineup that bolstered four 20+ home run hitters hasn't changed much. The A's don't rebuild, they reload. Oakland lost Bartolo Colon to free agency and replaced him with Scott Kazmir. Will the A's have the same success with another retread pitcher? It may be the biggest key to the season.

As you can see there are a few very large hurdles to get over before the M's can be playoff bound. Not to mention the Astros, whose prospects are getting closer to the majors everyday. That may explain some of the Mariners' moves this offseason.

The Mariners signed Robinson Cano this offseason to a 10 year, $240 million contract. His new representation, Jay-Z and Roc Nation Sports, may have overplayed their hand in hopes of squeezing every dollar out of the Yankees. But, Cano is in Seattle now. The Mariners brought in a bat that ranked twelfth in WAR* across the league and has been a consistently around a 6.0 WAR for the past four seasons. As a team, the Mariners had a collective offensive WAR of 4.5 last season. The simple fact is Cano will help make large strides toward the playoffs by himself. That said, Cano himself has come out and said this team has holes. 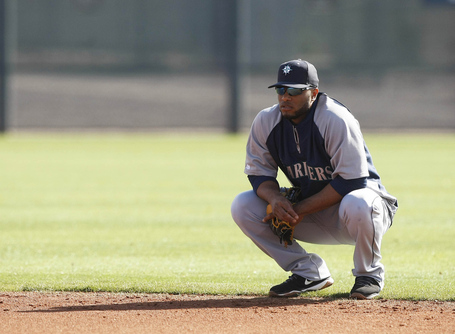 Cano spoke with ESPN's Tim Kurkjian, and said the team needs another right-handed bat and another starting pitcher. He would go on to say if it was his choice, he would have brought in Nelson Cruz, Ubaldo Jimenez, and Ervin Santana too. Well Robbie, you're not in New York anymore. Frankly I could finish this preview here, Cano summed it up perfectly. This team is still a few players away, and they are not coming from the farm system. But, we must press on.

The Mariners didn't stop at signing Robinson Cano, they made deals for Corey Hart and Logan Morrison. If you add Justin Smoak to the mix, there appears to be a trend here. Streaky hitters that play so-so defense and are on the field just as much as they are on the disabled list. The designated hitter is for the most part an afterthought, a major league player best served as a bat only. The Mariners seem to be collecting them left and right, and hoping a revolving door of playing the first base, outfield, and designated hitter will keep them all healthy. Let us not forget that they could also bring back Kendrys Morales. It should be fun to watch as this plays out.

Of course, any conversation about Seattle's starting rotation begins with Felix Hernandez. King Felix saw his fastball drop two or three miles per hour last season, but he has learned to set up batters instead of just blowing them away. It's one of the main reason there wasn't a drop in Hernandez's strikeout rate. Behind the King, Hisashi Iwakuma and Taijuan Walker will take the ball every five days. At the moment, both appear to be set to miss the start of the season. Iwakuma has a finger strain and Walker has a shoulder injury. It will be hard for any team to match the top of that rotation in a series when all are healthy.

Starting today, we'll be looking at different divisions around baseball to preview the season.

Spring Training 2014: The view from the AL East

What will the American League East look like? or East Coast Bias comes to TCB!

For the time being, you can pencil in James Paxton and Erasmo Ramirez as the other starters behind the top 3. Paxton, a September call-up, went 3-0 with a 0.92 ERA, with 21 Ks in 24 innings in 2013. Ramirez was also solid last year, going 5-3 in 14 starts with a 4.98 ERA. Non-roster invitees Randy Wolf and Scott Baker are fighting for the spots left by Walker and Iwakuma. Blake Beavan and Brandon Maurer will also get a shot. Maurer was the number five starter when the M's broke camp last year. Beavan, the former first-rounder, struggled in only two starts last season with an overall ERA of 6.13.

Seattle's bullpen revolved around Danny Farquhar and Tom Wilhemsen last season. Wilhemsen was 24 for 29 in his run as closer. Farquhar ultimately took the job with his 12.77 K/9 rate. The Mariners didn't feel set with that position, adding former Rays closer Fernando Rodney this offseason.

We have already discussed the DH Bermuda Triangle that will have Hart, Morrison, and Smoak floating between designated hitter, first base, and a corner outfield position. Of course, Cano has second base locked down. The frontrunner for shortstop is Brad Miller, but Nick Franklin may make a run at the position in Spring Training. Mike Zunino was one of the first prospects to get to the big leagues from the 2012 draft class. He has locked down the position since the Jesus Montero project appears to be going south. Zunino batted .214/.290/.329 with 5 HRs and 14 RBIs in 52 games last season. To round out the infield, Kyle Seager is at third. Seager collected his second consecutive 20-home run season, and showed good plate discipline. 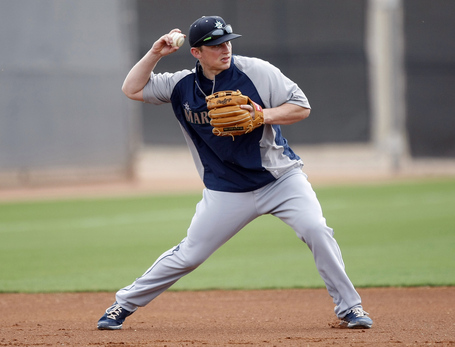 Michael Saunders appears to be the everyday centerfielder at this moment. The Canadian burst onto the scene with a strong performance in last year's World Baseball Classic. In the 2013 regular season, Saunders struggled with poor contact skills. If Logan Morrison and Corey Hart (I shudder to think of the defensive metrics for that combo) don't take the corner outfield spot, Dustin Ackley should get another chance. After his year-long slump and stint in the minors, Ackley posted .285/.354/.404 slash in 68 games following a return to the majors.

Fourth in the AL West, at best they finish third. The AL West is currently a murderer's row of teams minus the Astros. If the Rangers' egos get in the way, Athletics lose their magic, and the Angels fail to change their tune from last year - then just maybe the Mariners can sneak into the playoffs. I refer you back to Mr. Coleman's article for January  about the Astros - News flash - It's really, really hard to get into the playoffs.