Texas, California, and Florida lead the nation in draftees, and not coincidentally, in scouts. But is the way the scouting community is currently situated the best way?

I have to admit, I feel awfully spoiled sometimes here in sunny Southern California. Great prospects seemingly grow on trees around here. I can see games at UCLA, USC, UC Irvine, UC Riverside, Pepperdine, Loyola Marymount, Cal State Northridge, or Cal State Fullerton - and those are just the Division-I schools. There are also fourteen D-II/III schools and 361 prep programs within sixty miles of my house. Any day of the week, I can watch a draft prospect.

Most of you can understand that, if you live in Texas. In fact, in the 2003-11 drafts, California and Texas combined to produce more 26.19% of all the players taken in the Rule 4 Draft. Throw in Florida, and that number jumps to 36.72%.

As a result of all this great baseball, I've come to know a lot of the local area scouts. Those that I don't know by name, I know by sight. There is a heavy scouting presence in California, as witnessed by the fact that over 1,900 players - the most of any individual state - were drafted out of California colleges and high schools between 2003 and 2011; far more than out of any other state. In fact, the only other state to hit four digits is Florida, which comes in below 1,200. Texas is third, falling just shy of a thousand.

And yet, when I talk to friends back home in Ohio, they always talk about how rare it is to see scouts, even at Division-I games, which led me to one train of thought: Are there places where these scouts might be better served? Is there a more effective way that Major League organizations could be deploying their personnel? With that in mind, I decided to take a look at the numbers.

I chose the 2003 - 2011 drafts for my sample size. I didn't want to go too far back into the past, in order to keep the data as current as possible. Additionally, I wanted to give the sample room to "breathe" - for players to filter to the big leagues in a reasonable amount of time. So I didn't include the 2012 or 2013 drafts in my numbers.

How Are Scouts Currently Being Deployed?

The first question we must ask when looking at this question is: How are teams currently deploying their scouting staff? A reasonable way to answer this is by looking at the number of draftees out of individual states during our sample. 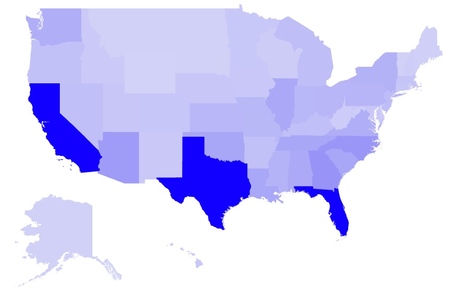 From looking at the map, we can see that most of the players drafted by Major League teams live in the south. The top ten states, in order, are California, Florida, Texas, Georgia, North Carolina, Arizona, South Carolina, Tennessee, Oklahoma, and Louisiana. Coming in at #11 is the first northern state: Illinois.

Meanwhile, Wyoming, Montana, North Dakota, and South Dakota account for just 23 combined draftees during our span - one fewer than Rhode Island. In fact, 23 is fewer than every state except for Maine (12), Vermont (5), and Alaska (4).

Using this information, we can intuit that most teams have a heavy scouting presence throughout the southern states, a moderate presence through the midwest and the east, and virtually no presence at all in the Mountains and Plains states.

Are The Scouting Areas Effective?

Certainly, it's no surprise that the SEC, ACC, Pac-12, and Big 12 are the best baseball conferences in baseball, and the map above follows those conference lines pretty closely. But the goal of scouting is, presumably, to find major league players. If those conferences - by virtue of being better conferences - produce better players, than that should be easily shown.

So what I decided to do was to count up the accumulated bWAR of the players drafted from each state during this sample. Obviously, states that produced more prospects are bound to produce more major leaguers, and I wanted to find a way to account for this, so I looked at the data a few different ways. First, I divided the total bWAR by the number of draftees from the state: 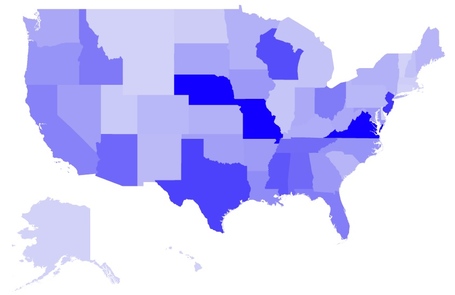 This gives us a different look entirely. Things have shifted a little farther north, with Missouri, Nebraska, and Virginia reigning supreme.

There are, of course, some possible explanations for this. If fifteen players come from California and five make the big leagues, at least one is bound to put together a high enough WAR value to prop up the ones who didn't make it (a perfect example of this is Wisconsin, where Jordan Zimmermann has created enough bWAR to place Wisconsin sixth, despite the fact that he is the only one of the state's 39 draftees to make it to the big leagues.)

The ability to draft a major leaguer is, of itself, an accomplishment. So I also looked at the per-state ratio of major leaguers per draftee: 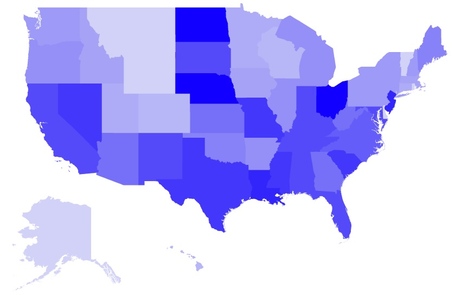 North Dakota, Ohio, and Nebraska emerge as the leaders here. A direct comparison between this map and the first in our article tells an interesting story: Despite the fact that most players are drafted from the southern states, the ones who are drafted from northern states are, on average, better major league players.

This isn't to say that this is the ideal national scouting profile for teams to follow. There is a very obvious possible explanation here: Most players are drafted from the southern states, which probably means that most scouts are working in the southern states. If that's the case, then the very fact that a team drafts someone from a cold-weather state like North Dakota or Ohio means that they're pretty sure that that is a special player.

Every team needs organizational players. Many of those players come from Florida, California, and Texas... simply put, the gems may simply not be enough to cancel out the sheer number of guys who never make it to the big leagues.

How Should Teams Deploy Their Scouts?

It occurs to me that the "ideal" deployment of scouts should probably follow some combination of all of the factors discussed in this article and more. To that end, I ranked each state by major leaguers-per-draftee, WAR-per-draftee, and WAR-per-major-leaguer. I then combined each state's ranking in the individual categories, assigned points to those rankings, and created the map you see below. 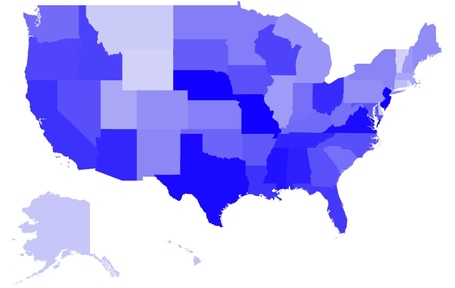 It's a lot less clean than the first map, but it shows the complexity of the scouting process.

Drawing too many conclusions from this data would probably be a mistake, but it occurs to me that there exists a definite possibility that the favoritism teams show players from Texas, California, and Florida may not be the most efficient way to use their scouting departments. If nothing else, the fact that the footprints of the ACC, Pac-12, Big 12, and SEC are so vast means that more data is available on these teams, and scouts might be better served heading north to try to find more undiscovered gems.