Across the Astros board: An interview with Mike Elias, Director of Amateur Scouting (Part 2 of 2)

Edward S. Garza continues his interview with an engineer of the Astros' future, Mike Elias.

Share All sharing options for: Across the Astros board: An interview with Mike Elias, Director of Amateur Scouting (Part 2 of 2)

In part 1 of this interview, published last Wednesday, Astros Scouting Director Mike Elias reflected on his entry into the baseball industry, his work with the St. Louis Cardinals, and his thoughts on the Astros’ past two drafts. In this second and final installment, he looks ahead to the 2014 Draft, discusses the Astros’ current farm system (including sleepers), as well as summarizes some strategies going forward. Last but not least, he talks about calling the Bayou City home.

On the composition of 2014’s draft class: "You could identify pockets of strength in a draft. I’d say that this year there’s a lot of high school pitching, a lot more than we had last year certainly. There’s a really deep high school pitching crop on both coasts and in Texas, as well as the upper Midwest. In the first three rounds I think there’s going to be a lot of high school pitching taken, especially compared to last year. On the college side, there’s also a really good group of arms at the top of the draft. You’ve got five or six names you could probably rattle off who should go in the top fifteen picks. It’s really a good year for pitching.

"High school position players are solid this year. With college position players, there’s quite a bit of corner players with some power. Maybe they don’t play up the middle or project to play up the middle, but there’s some good power bats in the class that play first or third or corner outfield....[The crop overall] is slightly above average over the course of draft history. You know, we can say that, but drafts will surprise you. Sometimes you feel like you’re in a great draft, and then you look back seven or eight years later and the first round wasn’t as talented as people thought, or vice-versa. People underestimate a draft and then you look back seven years later and there are six, seven, eight all-stars in the first round. So it’s tough. But it’s a pretty good year."

On having a supplemental draft pick in 2014: "We’re definitely excited that we have the extra pick [a pick between the first and second rounds, courtesy of the Baltimore Orioles in the Bud Norris trade]. I think it’s a good year to have that....[A supplemental pick is] always a bit of a morale booster, an excitement booster for the scouting department. It gives things a little more action, makes them a little more interesting. It kind of spurs us on the hunt, and we know that it makes our job bigger.

"But it also gives us twice the chance of getting and signing one of those players that we’ll be scouting in that area of the draft. We’ve got two picks: thirty-six and forty-one. They’re probably going to change, depending on where some these remaining [free agents] sign. Both of those picks may get pushed a slot, but as of right now it’s thirty-six and forty-one. So it’s the same group of players that we would’ve been scouting anyways. But it’s good for us because we know we’re going to get two of those guys. I know there are going to be several guys that we’re really excited about around there."

On the current depth of Houston’s farm system: "There are so many [prospects]. Obviously we’re very pleased to have a really deep group right now. I think depth is very important. I think it’s almost an underrated quality when you’re talking about farm systems or just roster composition in general, because baseball is so unpredictable. Injuries happen. Performance changes happen. Certainly on the pitching side, the more the merrier. Then, when players sense that there’s a lot of depth at their position, I think it helps motivate them to compete with one another and train hard and feel that push to compete within the organization for jobs. We’re excited about that." 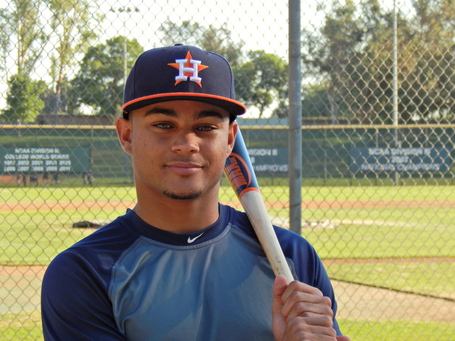 On sleepers in the Astros’ farm system: "There’s a lot of guys we could name. From last year’s group, I think we are really excited about the two high school kids we took first, [Jacob] Nottingham and [Jason] Martin. Nottingham is a catcher. He’s a multi-sport athlete. Very strong kid. Got a lot of scouting love in the Southern California region during last year’s draft....We were a little surprised that he fell to us where he did, and we were really happy to snatch him up. It’s going to be fun watching him develop, because he’s got all the tools you need to turn into a power-hitting catcher. He’s got a really good arm....It’s a good throwing stroke. He’s an athletic kid and he’s adapting very well to improvements with his catching technique. He’s made big strides with his receiving. I think he’s going to be a really good receiver back there. Then he’s got natural right-handed power. He’s got a good swing. He had a really good debut in the GCL. He played well there, showed some plate discipline. He showed what we were looking for and then had a great instructional league

"Jason Martin is a left-handed hitting outfielder with a really solid across-the-board toolset. He’s a better-than-average runner. He could play center field. He throws well enough. He can hit, and he’s got a really advanced approach at the plate, especially considering he’s so young. He was seventeen all year and he’s going to be eighteen all [this] year, so we like him. I think he has the ceiling of a Coco Crisp kind of guy. He’s a great kid....He’s going to be fun to watch develop.

"Kyle Westwood had a big debut in the Penn League. He’s a good-looking senior-sign. He can really sink the ball and get a lot of grounders.

"I really like Andrew Aplin....[His] physical tools don’t necessarily hit you over the head, but he does everything well. You would put a fifty grade on all of his tools, or better. He can run. He can throw. I think his defense in center field has a chance to be of the impact variety. He’s an excellent center-fielder. This guy can really play the game. He’s had huge numbers for the past two years. He walked more than he struck out last year in Lancaster. He hits for some power. He’ll be going to double-A this year, and I expect that he’s going to have a huge year there. He’s somebody that we’re really happy we have. I think he’s not one to sleep on. He’s certainly one of my favorite players to watch in the system."

On the progress of Delino DeShields, Jr.: "Delino DeShields is swinging the bat very well. This is a really young kid still. He had a great offensive season last year. He’s transitioning very smoothly to the outfield. I saw him in the Arizona Fall League, and he looked good out there. His swing looks good. Obviously he can run. I think this guy can do a lot of things for a roster. He could be a very exciting player once he gets to Houston."

On DeShields’s seemingly fallen status on prospect lists: "I think it’s reflective of the improvement that has gone on around him in the farm system. We’ve got a lot of guys, so naturally you might tend to forget about one or another. In the context of the group somebody might not actually stand out as much. But [DeShields] is doing as well as he ever has. He’s getting better and better every year. He’s had two great seasons in a row. We’re real excited about him."

On panoramic strategies for the system: "We tend to focus on what we can see very easily with our eyes, which tends to be strength and speed and power and size. While we do a very good job of this, it’s a little harder to make predictions as to how somebody’s more invisible skills might continue to progress....The more bets you have laid down on the table, the more chances you have of hitting the jackpot. [That’s] one crude way of saying it. I think depth is an important reflector of that.

"Especially that’s the case with pitching, because pitchers change so much. They gain velocity. They lose velocity. There’s an inherent injury risk to the occupation of pitching. You need a lot of pitchers to fill out a staff. You only need one shortstop, but you need five starters and seven relievers. So, it’s nice to see that depth there. Certainly we want to keep adding to the top, medium, and bottom of our organization.

"We’re at the point now where, when we discuss roster situations going into Spring Training with Quinton McCracken and player development, there’s a guy that we like as a prospect at every single job opportunity for every team. We’ve got tough decisions to make up and down each roster. To me that’s a really great sign. That’s why you have these minor league clubs, because you want to have prospects manning each one of those spots. Those spots are big opportunities. We’re in a position where the kids have to compete with one another for those jobs, and we have to make hard decisions on whom to send where. But we know that there’s a lot more that needs to happen. We’re going to keep building towards that, while hopefully improving at the major-league level at the same time, as these young players continue to improve."

On living in Houston: "I’ve been living there now since early 2012, so my wife and I have been there for two years now. We love it. We moved from Florida, where I had been working for the Cardinals....We really enjoy it in Houston, just because it’s so easy to live there. It’s got everything you want, the shopping, the grocery stores. The people are friendly. It’s a very livable city.

"I had been to Minute Maid Park before [2012], but I had never been into the bowels of the building, where our facilities are. I was really struck by what a first-rate facility it is. I had no idea it was so plush and well-constructed and well-designed. I think that’s a big benefit for us as an organization, and just a fun part of coming to watch baseball in Houston.

"I’m on the road about two hundred days a year, or more. So, when I get home,...I try to spend as much time with my wife as possible. We go out to eat. I can’t believe how many great restaurants there are in Houston. We’ve tried most of them, and we keep hoping to try them all. [Houston is] just an unbelievable food town as far I’m concerned."