Edward S. Garza looks at (re)considerations of the swings of Brett Wallace and J.D. Martinez.

Good morning, Crawfish Boxers. For today’s Boil, I want to share with you a pair of articles that excellently dissect the swings of two Astros: Brett Wallace and J.D. Martinez. These hitters have struggled, at best, to succeed in the majors, though each was once a touted prospect. With this background in mind, two writers--Athletics Nation’s Jerry Brewer and FanGraphs’ Dan Farnsworth--seek to analyze the problems with each player’s swing, with Farnsworth highlighting the promising changes in Martinez’s. Their analyses should shape fans’ perceptions of Wallace and Martinez throughout this season. 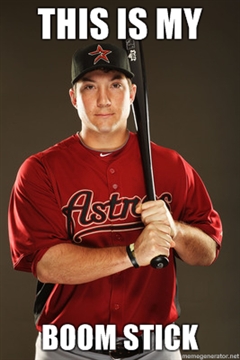 In "Josh Donaldson vs. a Curveball," Brewer praises the swing of the Athletics’ third baseman, namely the timing mechanism that allows him to adjust to breaking balls. He does so in part by contrasting Donaldson’s form to that of Wallace, who, according to Brewer, extends his front leg too far in front of his body, often losing control of his stride. Citing some images and a GIF, he asserts that the former A’s prospect "doesn’t have a mechanism to delay for off-speed pitches," a charge that may explain Wallace’s whiffs on slow stuff below the knees. To skip to the passage, scroll to the paragraph that starts "Of course not everyone does this as well as Donaldson." (Brewer is the founder of East Bay Hitting Instruction and writes under the pseudonym "EBHI," as you’ll discover at his contributor page.)

Published last December, "Rule 5 Dark Horse: J.D. Martinez" offers a sunnier vision of a former Astros prospect. In it, Dan Farnsworth tracks the recent changes in the 26-year-old’s swing, changes that reaped strong results in Venezuelan winter ball. He notes the lower positioning of Martinez’s hands as well as his more vertical shoulder-turn, modifications that create a direct path to the ball. In doing so, he compares footage of Martinez’s swing last summer with some from this past winter (a cool feat considering how hard it must be to find broadcasts of the Venezuelan leagues). "I think that whoever takes a chance on this guy will be more than happy with the results," Farnsworth writes. "With some continued refinement to [Martinez’s] swing we could be looking at...a legitimate Major League power hitter." The article makes one happy that Martinez passed unclaimed through the Rule 5 Draft.

What do you think of these assessments? How do they affect your opinion of Wallace and Martinez? Of the two of them, whom do you see producing more this year? Whom, if either, do you see contributing to the next contending Astros team? (Both are under team control through 2017.) Let us know in your comment.