The 2014 Astros Fan Favorite March Madness Tournament is in the books. The championship wrap-up, final thoughts and feedback wanted. 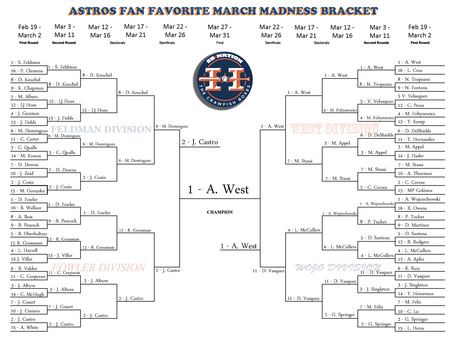 Like I said last year, Aaron West winning is a testament to the kind of support he has behind him. Family and friends, for all contestants, are still fans of these players.

I would like to note that last year, in a bonus vote, Jason Castro and Jose Altuve faced off to determine the major league fan favorite. Altuve won pretty handily, 69-45. This year Castro won, 180-90, which further demonstrates the "what have you done lately for me" mentality in sports.

Now that the tournament has been completed, what are some of your thoughts and ideas about the tournament and how we can improve it next year. Last year, Reillocity made the suggestion that I split the brackets into major leaguers and prospects and that's what I did this year. I think it worked out pretty well and allowed us to name a major league champion without having to do an extra vote. Stuff like that helps me improve the tournament.

A special thanks goes out to Ryan Dunsmore for doing an individual graphic for each matchup. I told him to just one generic one for all the matchups, but he went the extra 63 miles to give each post it's own unique flavor and I am extremely appreciative of that.