Astros, Rockets, and Comcast come to an agreement over mediation

The Astros, Rockets, and Comcast have agreed to allow U.S. District Judge Lynn Hughes as mediator for a possible resolution in the CSN Houston Chapter 11 bankruptcy case.

Share All sharing options for: Astros, Rockets, and Comcast come to an agreement over mediation

It's time for another episode with CSN Houston court with David Barron. (The People's Court music plays) 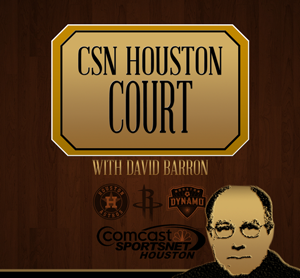 The Astros, Rockets, and Comcast were in court on Friday. David Barron once again had the details.

This essentially formalizes their seven-hour, closed-door session Friday and, I suppose, indicates the possibility of further sessions.

All parties agreed that Hughes can continue to preside over the Astros' appeal of the Ch. 11 designation for CSN Houston.

What does this mean to us, the fans? The parties involved agree to have U.S. District Judge Lynn Hughes continue to help mediate future disagreements between the Astros, Rockets, and Comcast. The more than likely reason for this action was the simple fact that the parties themselves weren't going to reach agreement without some outside authority involved.

While this isn't a miraculous turn of events and another Opening Day will pass without the Astros on the majority of Houston television screen, progress is still being made. Jim Crane and Les Alexander haven't come out to the media claiming an impasse has been reached. The wheels of justice move slow, meanwhile we will continue our pre-1939 experiment of listing to the games on the radio.